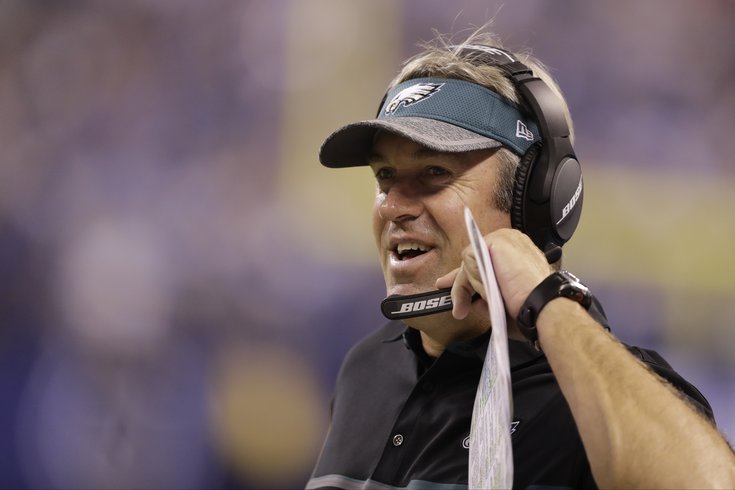 When you have a 6'5 wide receiver covered by a 6'0 cornerback in the red zone, maybe you throw him a high fade.

When you have four different running backs all with different styles and skill sets, maybe you don't use them all the same exact way, as we noted when we predicted Darren Sproles will be used more logically this season.

When you have a third tight end with very good receiving ability, maybe you actually, you know, let him play.

When you have a receiver with run after the catch ability, but not necessarily polished receiving skills, maybe you find easy ways to get him the football so he can put his explosiveness to use.

The above are extremely logical concepts that Chip Kelly didn't seem to grasp in his time with the Philadelphia Eagles. However, they are not lost on new head coach Doug Pederson. In the third preseason game against the Indianapolis Colts, one of the more obvious takeaways was how Pederson maximized his players' skill sets.

As noted above, when you have a receiver with run after the catch ability, but not necessarily polished receiving skills, maybe you find easy ways to get him the football so he can put his explosiveness to use. That would be Huff.

"Josh is that type of guy," said Pederson. "He's a short-to-intermediate receiver, good quickness, great with the ball in his hands obviously, even as a runner. He's got that from college. We just wanted to put the ball in his hands as fast as we could in those situations and see what he can do, and he had his best game of the preseason."

Here's Pederson getting Huff on a quick slant, allowing Huff to use his RAC skills to get a 38 yard gain:

And here he is getting Huff the ball on a jet sweep. If Huff doesn't have the best hands, maybe just hand the ball to him on occasion and let him use his speed. Here he beats the defense to the corner of the end zone for a score.

"I have some running back in my (background)," said Huff, "so I guess they're a little bit more comfortable getting the ball in my hands on the jet sweep."

From the four yard line, the Eagles split Green-Beckham out wide left on an island against a corner five inches shorter than him. Maybe just throw it up and let DGB use his size to make the play?

In the NFC East, Green-Beckham will have a significant height advantage over every corner.

A couple weeks ago, I noted (half-jokingly, but kinda not really) that the Eagles' third tight end (Burton) was the Eagles' second-best wide receiver. Burton is a tremendous athlete with receiver-like abilities, and the Eagles are using him that way.

"He's very good in space, away from the ball, which is how we used him the other night," said Pederson.

Here Burton is lined up out wide like a wide receiver. If you're a defense, you have to decide how you want to cover him. Do you cover him with a defensive back and give up a size advantage, or do you put a linebacker on him and risk getting dusted. Here the Colts used a corner, and the Eagles hit Burton on a quick slant, which is an advantageous route for allowing bigger receivers to use their size advantage.

As we noted previously, the Eagles should probably run their offense through their tight ends. So far, they've used a lot of three tight end sets.

Here they run a play that beats man coverage. Watch as Brent Celek and Zach Ertz run dueling crossing patterns designed to rub out defenders playing man and creating separation. However, the Colts are in zone, and Burton is able to find a place to settle in behind the linebackers.

You can't run that route combination with that personnel grouping without three tight ends who can catch the football.

And here we have a goal-line situation. The defense is forced to respect the run, so when you have three good receiving tight ends, the Eagles offense becomes difficult to defend down in close. Celek gets a legal pick on the linebacker, and Burton catches the easiest TD of his life. This is like taking candy from a baby:

When you have three very skilled tight ends, use them. Because it makes sense!

Yes, we'll even note Wendell Smallwood, who didn't play all that much, but one play stood out. Smallwood has ability a receiver, so the Eagles lined him up at the bottom of the screen. He has a linebacker on him, so why not pick up a quick, easy five yards.

However, that's not a role I would ever use for Ryan Mathews, who is a power runner and not in any way a threat as a receiver lined up wide in the formation. So how did Doug use him? Well, he ran him behind that three tight end set:

BECAUSE IT MAKES SENSE!

To be clear, I don't want to be showering Doug Pederson with gold stars for using his skill players they way they should be used, but let's go ahead and give him a hearty golf clap.