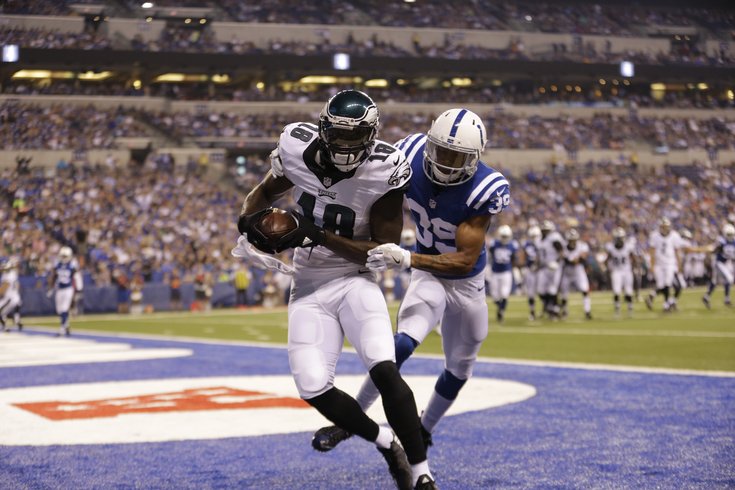 Stop me if you've heard this before: Sam Bradford and the Philadelphia Eagles offense looked almost unstoppable in their third preseason game.

Last year, the Birds jumped out to a big lead over the Packers -- thanks to Bradford's 10-for-10 passing for 121 years and three touchdowns -- en route to a 39-26 win in Green Bay, moving them to 3-0 on the preseason. This time around, Bradford wasn't quite that perfect, but was more than effective as he led his team to a 24-3 third quarter lead before giving way to backup Chase Daniel.

There was a lot to like about the Eagles on the offensive side of the ball in the 33-23 win over the Colts, but, as we learned a year ago, putting too much stock in the preseason can really come back to bite you. In fact, it can be argued that elevated expectations due to stellar preseason play had a role in the dismissals of the Eagles' two previous coaches.

Sure, that's far from the only reason Chip Kelly and Andy Reid were let go by the organization, but it is a stark reminder of the meaninglessness of preseason results. But that's not what we're here to evaluate, or at least shouldn't be. The preseason is all about the process.

That's why the games don't actually count -- the result is secondary to its own production.

Against the Colts on Saturday night, the process was sound. Let's take a look around the offense -- specifically in regards to those who have an actual shot at making the team -- and talk about what we can take away from the game without getting too far ahead ourselves.

Bradford's night got off to a bit of a rough start. He was sacked on his first play of the game for a 13-yard loss. Three plays later, his passed bounced off Nelson Agholor and into the hands of a Colts defender for an interception. But after that, Bradford was on fire. Here's a look at how each of the next four Eagles drives ended before the starters were finally taken out of the game in the third quarter:

NOTE: If you're keeping track at home, you'll notice that the Eagles still hadn't punted in the game -- and when they finally did on Daniel's first drive, it was blocked into the end zone for a Colts touchdown.

Overall, it was a great showing for Bradford, who helped calm a lot of nerves after rough outings by the offense in each of the first two games. One of the things that was a concern was the Eagles' apparent inability to move the ball in big chunks. Through their first two games, their longest play from scrimmage was a 23-yard reception.

That 38-yard catch and run from Huff was the Eagles’ longest of the preseason … by 15 yards.

Against the Colts, they were able to move the ball much more efficiently with five plays of 20 or more yards, including Josh Huff's 38-yard reception and this 22-yarder on which Bradford delivered a perfect strike.

Bradford's accuracy has been pin-point, put it on proper shoulder to allow some YAC for Huff, who's had a good night pic.twitter.com/KHTYdL6Ehz

But quarterback isn't really a position up for debate when it comes to who will make the 53-man roster. So let's move on to one that still has some spots up for grabs.

Things didn't get off to a great start for the Eagles receivers either, beginning with the interception that bounced off Nelson Agholor's hands (more on that in a bit).

•  With Huff on the roster bubble -- and special teams being one his best chances to make the 53-man -- being replaced on kick returns by rookie running back Wendell Smallwood was an ominous start.

But the third-year WR from Oregon bounced back in a big way, catching two passes for 60 yards and scoring on a nine-yard run that looked like something you'd expect Chip Kelly, not Doug Pederson, to implement.

Josh Huff TD run! Like if you want to see Huff used more like this in the Eagles offense pic.twitter.com/KTTJ5bMkeX

Huff needed a big game, and he certainly delivered.

•  Fans also got their first real taste of what Dorial Green-Beckham can bring to this team. He caught a pair of passes for 15 yards, including a four-yard #DGBTD that highlighted one of the main reasons the Eagles acquired him last week.

Remember when they used to run that play to Riley Cooper? I'm going to go out on a limb and say this looks like it's going to work slightly better -- and as Jimmy Kempski pointed out, four of the six starting cornerbacks in the NFC East are under 6-feet tall. DGB is 6-foot-5.

That should serve Bradford and the Eagles well in the red zone.

My fantasy team name for the upcoming season has been decided... @realdgb

•  Agholor failed to record a catch in the game. In fact, he wasn't targeted again after the interception that hit him right in the hands. I don't think the Eagles are quite ready to give up on a guy they spent a first-round pick on last summer, but he's got to do better than two catches for 30 yards through three games.

[UPDATE: WRs Rueben Randle and Chris Givens were two of eight players released by the Eagles on Sunday.]

•  Rueben Randle may have watched his roster spot slip away in Indy. If the Eagles decide to keep just five wideouts, it's hard to imagine he makes the team.

So who does? Jordan Matthews, Dorial Green-Beckham, Nelson Agholor, Josh Huff, and either undrafted rookie Paul Turner, who has had a great camp and leads Eagles receivers in receptions (11) and yards (99), or Chris Givens, who unlike Randle was out there with the first team.

Of course, because the team spent more on Randle, they could opt to keep him over a guy like Turner. But it's beginning to look more and more like that would be a mistake.

There's a lot less up for debate when it comes to the running back position, but a spot could open up depending on how many wide receivers the Eagles wind up keeping. Ryan Mathews and Darren Sproles are guaranteed spots. Kenjon Barner and rookie Wendell Smallwood aren't far behind, but aren't necessarily locks. Let's take a look at how their play Saturday night may have impacted their chances at making the final roster.

•  Mathews carried the ball three times for 31 yards and Sproles recorded just one catch for eight yards. But like we said, they're not in any jeopardy of losing their roster spots.

•  Barner had a breakout game last summer against the Colts in which he returned a punt for a touchdown and also recorded a rushing touchdown (6 carries, 29 yards). This year, he again carried the ball six times, gaining 39 yards, with 25 of it coming on one carry. On special teams, he was effective again even though he didn't return one for a score. On his one kickoff return, Barner returned it 35 yards. He also had a pair of punt returns, one 25 yards and one eight yards.

He's a guy Pederson and special teams coach Dave Fipp seem to like, and although his numbers against the Colts won't pop out at you, he again showed that he's a capable backup to Mathews and can contribute as a core special teams player as well.

•  Smallwood saw his first action of the preseason against the Colts, and the fifth-round pick out of West Virginia didn't really pop in his debut. He carried the ball twice for 11 yards and caught one pass for another five. As previously mentioned, he was out there on kick returns ahead of Huff.

That doesn't mean he's supplanted the third-year wideout, but more likely suggests that the team knows what Huff can do in the return game and preferred to take a look at the rookie while there's still some time left in the preseason. On his only return of the night, Smallwood brought the kick back 30 yards. I have a feeling we'll see much more from him on Thursday night against the Jets, assuming he's cleared following a head injury that forced him to leave his debut early.

•  Byron Marshall continues to lead the Eagles backs in carries, adding a team-high 10 against the Colts. Unfortunately, even with his four yards per carry in Indy, his average so far this preseason is up to just 2.8 yards per carry. For comparison purposes, he has just as many yards as Mathews (64), but it's taken him well over twice as many carries (23 compared to 10) to reach that number.

Zach Ertz and Trey Burton combined for 60 yards on 10 catches (10 targets), including a touchdown, against the Colts. Brent Celek had a much quieter night, failing to haul in his only target.

It's a position that's a strength for this team and given the fact that Pederson has shown so many three-TE sets this preseason, you're likely to see four of them on the 53-man roster.

Who will that fourth guy be? Chris Pantale, who caught both passes thrown his way Saturday night.

With the athleticism they have at the position, it's no surprise that Bradford likes utilizing his tight ends, especially when they're able to create the kind of mismatches that come from having Ertz, Burton and Celek on the field at the same time. It also allows the Eagles to add an extra level of protection for Bradford behind an offensive line that has some questions marks heading into the season.

They played extremely well against the Colts. There's not much else to say. The lone sack of the night came on their first snap. Their lone holding penalty came late in the third quarter and was called against someone who isn't likely to be on the team when the Birds open the season against the Browns.

The Eagles averaged a healthy 5.4 yards per rush. The quarterbacks had time to throw. Honestly, it was just a good effort up front from the line.