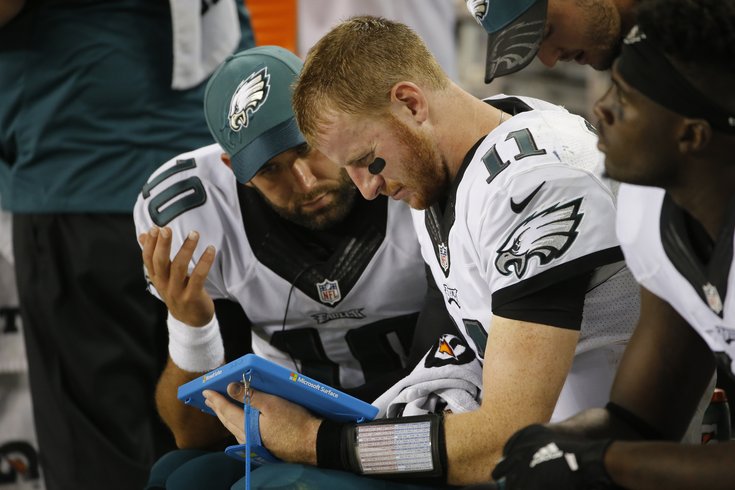 "Carson, see this throw here? That's not enough air yards. Every time you drop back, you should be thinking, air yards, air yards. Say it out loud... Air yards."

When Chase Daniel signed a three-year, $21 million contract with the Philadelphia Eagles back in free agency this offseason, it raised some eyebrows. Daniel had been in the league since 2009 (seven years), and had attempted a grand total of 77 pass attempts, while primarily playing caddie for Drew Brees in New Orleans, and then later for Alex Smith in Kansas City.

As the list above shows, the only "backup" making more than Daniel is San Francisco 49ers quarterback Colin Kaepernick, who was very clearly a starter when he signed his deal. Ditto that for "backup" Jared Goff, who the Rams drafted to be their franchise quarterback. In fact, there are only three "true backups" (Foles, McCown, and Henne) who make even half of what Daniel makes.

Daniel's shaky preseason performances didn't do much to lower the eyebrows of skeptics who wondered why the Eagles paid him the way they did. If the Eagles paid Daniel essentially like the best backup quarterback in the league because they though he was the best backup quarterback, skill-wise, that was a mistake. However, the intangibles that Daniel brings to the table may make him worth the investment, solely for his influence on rookie Carson Wentz.

"It’s been very valuable to Carson (having Daniel), obviously," said Doug Pederson. "Chase has been through this now with Alex Smith for three years. He was with Drew Brees obviously in New Orleans. The one thing that Chase really prides himself on is understanding our opponent, and he does it through film study. This is what I’ve seen these first few weeks with Carson.

"It’s valuable to have a backup quarterback who, obviously I know the role very well, to be prepared like a starter, but yet at the same time you’re there to assist the starter and be another set of eyes for him on the field is beneficial. That’s what Chase has done, besides teaching him how to study and what to study and what to look for."

Asked if he views Daniel as something of an additional assistant coach, Pederson agreed that he did.

"I do, on the football field," he said. "That’s something that I’ve seen especially when I can’t be over there, or they’re with Frank (Reich) or John (DeFilippo), and they’re all kind of huddled up between periods at practice. They’re constantly dialogueing (sic) and Chase has a lot of good insight and he has a lot of good thoughts, and some of the ideas they bring to us, ultimately we either put them in or we don’t.

"It’s good to have that guy. He’s also sort of a calming presence for Carson on the football field in games. A lot of times players – I just know this from being a player, and being Brett (Favre’s) backup – he and I would talk a lot more on game day during games than us going to our coach. Because you’re the guy who’s out there playing. A lot of that dialogue that way, and that’s what I’m seeing with Carson and Chase on Sundays."

The Eagles have one of the most quarterback-focused coaching staffs (if not the most) in the NFL:

• Head coach Doug Pederson was an NFL quarterback in the NFL for 12 years and he's in his eighth year as a coach. He played with or coached quarterbacks such as Dan Marino, Bernie Kosar, Brett Favre, Jim McMahon, Donovan McNabb, Michael Vick, and Alex Smith.

• Offensive coordinator Frank Reich was a quarterback in the NFL for 14 years and is in his ninth year as a coach. He played with or coached quarterbacks such as Jim Kelly, Peyton Manning, and Philip Rivers.

• Quarterbacks coach John DeFilippo was Derek Carr's initial quarterback coach in Oakland, where Carr has developed into perhaps a top 10 type of quarterback, as he is currently fourth in the NFL with a QB rating of 104.6.

Add in Daniel as the high-priced tutor, and Carson Wentz has been put in an outstanding position to succeed. Credit Wentz himself for being as good as he's been so far, but maybe it's not the worst thing to overpay a backup a little to help maximize your chances of developing a potentially dominant starting quarterback.