The draft or free agency: Where are the Eagles likely to improve each position this offseason? 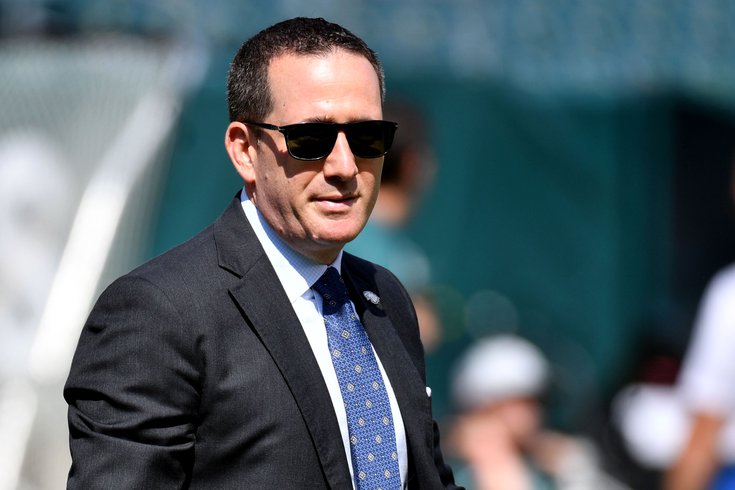 How will Howie Roseman be spending any more money this offseason?

The Philadelphia Eagles should have a fun offseason to watch, as they are likely to be active in free agency, and are projected to have 10 draft picks. An argument could be made that they need help at every position on the roster, aside from kicker, punter, and long snapper.

Here we'll take a look at whether the team is more likely to address each position in free agency, the draft, or both.

The Eagles currently only have one quarterback under contract, which of course is Carson Wentz. Beyond Wentz, who will be the backup quarterback is something of an under-discussed, but huge decision upcoming this offseason, and it's one that I personally don't have a great read on, if I'm being perfectly honest.

Josh McCown was added to the roster in August, and in his short time in Philly, he made a quite an impression, quickly becoming one of the more well-liked personalities in the locker room, for his up-beat leadership qualities. He was so impressive in that regard that he was getting mentions as a possible offensive coordinator candidate. Of course, in the one game in which he saw significant action, one of his 40-year-old hamstrings tore off the bone. In my view, McCown is a person that you want around the team, but I'm not sure he's going to get you desired results at this stage of his career if he actually has to play.

Nate Sudfeld had an impressive preseason in 2018, and even got into a couple games that season after Nick Foles went down. Heading into 2019 as the odds-on favorite to be the No. 2, Sudfeld had an OK camp, before he broke his wrist in a preseason game, leading to the signing of McCown. Once healthy again, Sudfeld found himself back in familiar No. 3 quarterback role. The Eagles say they think Sudfeld is a legit No. 2. Do we believe them?

Miles Sanders broke out in a big way for the Eagles down the stretch in 2019, and Boston Scott proved that he is worth keeping around. That leaves two open running back spots to be filled this offseason. One could be the return of Jordan Howard, who was a good player for the Birds before he got hurt. If he is back, the Eagles are unlikely to dip into the free agent pool for a running back. If Howard isn't back, they will likely sign someone else.

I also think it's a pretty good bet the Eagles select a running back on Day 3 of the draft.

This is obviously the Eagles' biggest need this offseason, and they are highly likely to address it in multiple ways, and with premium resources.

To begin, they have to add a veteran receiver either through free agency or via trade. Yes, we all know by now that this upcoming wide receiver draft class is projected to be one of the best ever, and the Eagles should absolutely make sure they draft one (or more) of them, but they can't count on rookies to make an immediate impact. If a rookie makes a big impact right away, fantastic, but the Eagles also must sure up that spot with at least one good veteran receiver, preferably with some speed, who can be counted on to make plays for Wentz.

The Eagles must add a minimum of three wide receivers this offseason.

#JimmyVerdict: Free agency, trades, draft, or even some other cool way of finding receivers that I don't even know about.

With the Eagles essentially running a two-tight end offense as their base set these days, I'm becoming more and more convinced that they should take a tight end on Day 3 of the draft. The Eagles really got burned Week 2 in Atlanta, when during pre-game warmups, Dallas Goedert unexpectedly was unable to play, and Doug Pederson had to throw a chunk of his game plan out the window as a result.

The Eagles seem to like Richard Rodgers and Josh Perkins for some reason. In my view, it's time for new blood.

Decent offensive linemen get paid in free agency, and since the Eagles don't have any starting holes to fill, they can continue to fill the OL pipeline through the draft, instead of overpaying in free agency like so many other teams are forced to do. While the Eagles have struggled finding talent in some areas, this is one unit where they have really gotten it right over the years.

I know that a number of fans would love to see the Eagles make a splash signing at DE, like a Yannick Ngakoue, for example. In my view, that's unrealistic. Like it or not, the Eagles' starters are set with Brandon Graham and Derek Barnett. The team loves both players, and they aren't going anywhere.

Financial resources are finite, and the Eagles have a lot of more glaring holes to fill. Don't count on significant dollars being spent on an edge rusher.

Beyond Graham and Barnett, the Eagles have a crazy number of DEs on the roster who played last season.Josh Sweat will be back. So will Genard Avery. That's four definites, plus a decision to be made on Vinny Curry, plus a bunch of returning players like Shareef Miller, Joe Ostman, and Daeshon Hall, who will all have a chance to make the team. How many DEs can you keep?

If anything, the Eagles will add a DE in the draft, because, well, they always do, but I just don't see it happening in free agency.

The Eagles badly need to add a good, young defensive tackle in the draft, as Fletcher Cox's odometer is getting up there, and Malik Jackson's viability as a starter has to be in question.

The only DT the Eagles have drafted since Howie Roseman's return to the front office was Elijah Qualls, in the sixth round in 2017. It's time.

Kamu Grugier-Hill will very likely be gone this offseason, and Nigel Bradham could be as well, on top of Zach Brown and L.J. Fort getting released in-season last year.

The Eagles should be looking to find a starter on Day 1 of free agency, and then supplementing the position in the middle rounds of the draft.

#JimmyVerdict: Free agency more importantly, and then the draft.

Again, like wide receiver above, the Eagles have to find a good starter in free agency this offseason, as they cannot count on one contributing immediately in the draft.

The Eagles are going to spend premium resources on a veteran cornerback either in free agency or in the trade market. Book it.

#JimmyVerdict: Free agency. And sure, maybe the draft too, but that's far less important than finding a good, established player.

Ultimately, it would be a big surprise to me if Malcolm Jenkins isn't on the team in 2020, but I do believe that Rodney McLeod will be moving on. If so, the Eagles will be in the market for a starting safety, and it's looking like a strong group in free agency.

#JimmyVerdict: Free agency, and maybe supplemented with an overdue draft pick at the position, perhaps on Day 3.