With dreams of World Series dancing in his head, Utley says 'still a little awkward' to come to Philly 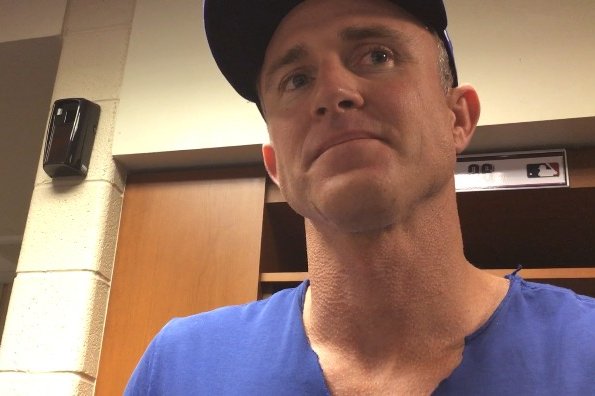 Chase Utley is back in Philadelphia tonight with the Dodgers, who need just four more wins to reach 100 on the season.

After chatting for a few minutes before pregame batting practice, Chase Utley turned to grab his glove when one last question was lobbed his way.

Do you expect the same reception you got last August?

There was no way to prepare for the treatment he received in 2016, when Utley returned to Citizens Bank Park for the first time since being traded to the Los Angeles Dodgers. Utley received not one but two standing ovations while slaughtering the home team with two home runs, including a grand slam.

Still, as one of the core four members of the Phillies 2008 World Series, two-time NL pennant-winning, and five-time division champion teams, Utley is in a bit of rarefied air when it comes to visiting players taking the field in Philadelphia.

Walking through the clubhouse doors on the other side of the ballpark probably feels like hitting right-handed for Utley, like most baseball players, a creature of habit.

“It’s a little bit different from last year but it’s still a little awkward,” he said. “For the amount of years that I played here, to suit up in this locker room is just different.”

Utley won’t lead off as he did last year, but he is in Dave Roberts’ starting lineup for the Dodgers. Utley is hitting seventh and starting as second base behind three-time Cy Young Award winner Clayton Kershaw.

The Dodgers arrive in Philly after taking a three-game series from Washington at Nationals Park in a possible preview of a National League Championship Series. Los Angeles beat Washington in the National League Division Series last year before falling to the eventual World Champion Chicago Cubs in the NLCS.

But the 2017 season has seen the Dodgers earmarked as the league’s World Series favorite. The Dodgers won their 90th game on Aug. 24 and looked on their way to making a run at the 2001 Seattle Mariners and 1906 Cubs for most wins in a single season (116).

The last three weeks since collecting their 90th win have been unkind to L.A. (6-17), but they appeared to have emerged from their September swoon last week. And it’s once again World Series or bust for a franchise that hasn’t been to a World Series since their last title in 1988 … when Utley was a Southern California kid (and Dodgers fan) just two months shy of his 10th birthday.

“I think the whole goal for everyone is to get to the World Series,” Utley said of expectations with the playoffs a little more than two weeks out. “That’s what we work for. I believe we have not only the talent but the desire to get there.”

Utley last played in a World Series in 2009, of course. Utley hit five home runs in that Series against the Yankees, tying Reggie Jackson’s record for most home runs in a single World Series.

Utley turns 39 in December. He's a free agent for the second straight winter.

Utley, one of six members of the ’08 champs still playing in the big leagues with Carlos Ruiz (Seattle), Cole Hamels (Texas), Jayson Werth, Ryan Madson, and Joe Blanton (Washington), didn’t sound too eager to talk about the possibility of retirement.

“Trying to take it one day at a time but I’m still enjoying it, I’m still having fun,” he said. “I still feel like I can contribute out there, so I’m not looking too far ahead.”

Utley is hitting .234 with a .324 OBP, eight home runs, and 19 doubles in 286 at-bats in 117 games this season with the Dodgers, who entered Citizens Bank Park with a magic number of four ... meaning they could clinch their fifth straight National League West crown in Philadelphia this week.