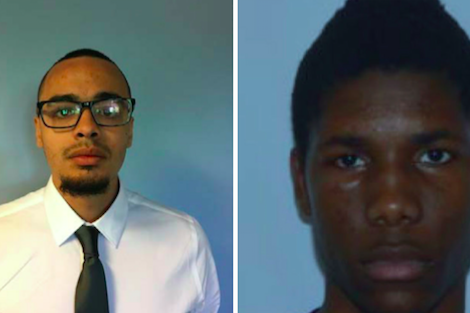 UPDATE: Evaughn-Sha Walters, 21, who was at large with a warrant out for his arrest, was taken into custody and arraigned on Sunday, May 7, 2017.

Shone Santiago, 22, was arrested in the deaths of Anthony Rodriguez, 23, and Marissa Kelly, 20, along with her child, in a crash that occurred Feb. 4 on Route 422. Evaughn-Sha Walters, 21, the man driving the second vehicle, remains at large.

Police responded just after midnight to a report of a one-vehicle crash in West Pottsgove. Investigators found that a white BMW crashed through the guardrail and launched down an embankment, landing on its roof in a ravine more than 200 feet from where it left the roadway.

Santiago was extracted from the vehicle and flown by helicopter to Reading Hospital. Rodriquez and Kelly were pronounced dead at the scene.

Subsequent investigation revealed that a second car, a Toyota Camry driven by Evaughn-Sha Walters, 21, had been racing the BMW at the time of the crash. Police said the race took place in a work zone on Route 422 eastbound, where Santiago was allegedly driving at a minimum speed of 121 mph just before the crash. The posted speed limit was 40 mph.

Authorities said a review of Walters' cell phone video showed the two drivers were involved in another race on Route 100 about an hour before the crash took place. The video allegedly included a speedometer reading that exceeded 140 mph.

Police have issued an arrest warrant for Sha-Walters, a resident of Washington, D.C., for his alleged role in the race.

Both Santiago and Walters are charged with third degree murder, third degree murder of an unborn child, homicide by vehicle, recklessly endangering another person and related offenses.Santiago is also charged with driving under the influence because his blood tested positive for the presence of THC, while Walters is charged with unsworn falsifications for allegedly lying to police.

Walters is described as a black male, 6 feet 3 inches tall, 175 pounds. He drives a white Toyota Camry with a gold hood, roof and rims with a Washington, D.C. license plate. Anyone with information on his whereabouts is asked to call Montgomery County Detective Bureau at 610-278-3368.

“A murder charge is not the typical charge in a vehicular homicide," said Montgomery County District Attorney Kevin Steele. "But the sheer indifference to the value of human life and the recklessness displayed by these defendants rose to that level.”