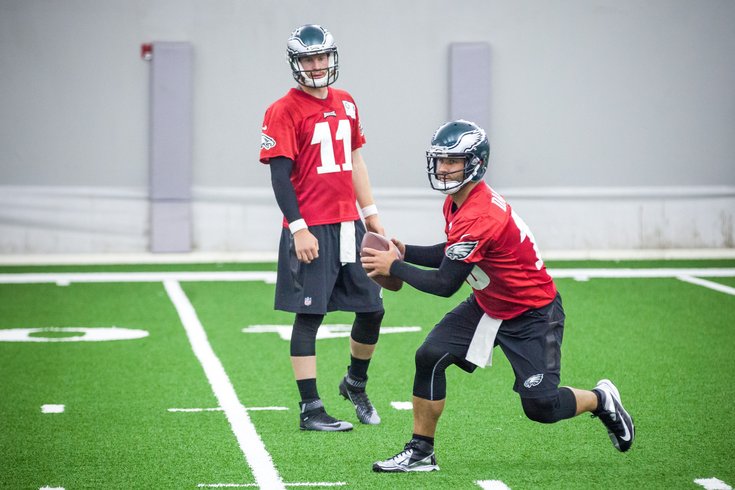 Ideally, Carson Wentz will watch other quarterbacks play for the Eagles his rookie season.

In the 2016 NFL Draft, the Eagles made eight selections, headlined of course by the No. 2 overall pick, quarterback Carson Wentz. However, it is unlikely that many of the Eagles' picks will see substantial action as rookies.

This morning I received an email asking me to project playing time for each rookie. Here are my guesses for each player:

In a best case scenario, the Eagles would love to be competitive in 2016 with Sam Bradford having his best season as a starter (not a high bar). That will make it easier for Howie Roseman to flip Bradford for a decent draft pick during the 2017 offseason.

It's very clear the Eagles want to be extremely patient with Wentz, a player they view as the long term centerpiece of the franchise, but not in any way some kind of short term fix.

Even if Bradford gets hurt, count on pricey backup Chase Daniel to take over the reins as the starter. There's a very good chance Wentz won't even dress on game day, as teams typically only keep two quarterbacks active.

Seumalo has yet to practice with the full team, as his school (Oregon State) runs on the quarters system. Therefore, we haven't yet gotten any kind of look at him yet. Doug Pederson said that Seumalo will be working specifically at LG, which is the lone spot seemingly up for grabs along the offensive line. That's a good sign for Seumalo to have a legitimate chance to win that job.

It's worth noting that rookie offensive linemen started for Pederson's Kansas City Chiefs in each of the last three years:

Seumalo represents the best chance for an Eagles rookie to start in 2016.

Smallwood is a lock to make the roster, but he may not play much as a rookie. Smallwood impressed during the spring, showing the ability to easily pluck footballs out of the air with his hands in the passing game. Pederson has noted on several occasions that Smallwood's receiving prowess is what made him an attractive player to draft.

The Eagles want to move their running backs all over the formation, trying to get mismatches against opposing linebackers. If Smallwood gets playing time early, that is likely how the Eagles will try to use him. However, Smallwood cannot yet be trusted as a three-down back, as he has to learn from scratch how to pass protect.

Vaitai plays a position where the Eagles' starters are very clearly set, with Lane Johnson and Jason Peters in place. The Eagles also have a number of reserves with NFL starting experience, which means that Vaitai isn't likely to be the first guy off the bench should something go wrong.

It's more likely that the Eagles are trying to groom Vaitai to become a replacement for Johnson at RT whenever Johnson takes over for the aging Peters at LT. Vaitai is a good bet to make the team, but he'll likely be a scratch on game day.

Malcolm Jenkins and Rodney McLeod will start at safety while Chris Maragos will make the team as a special teams maven and backup safety. Beyond that, the Eagles don't have much in the way of a sure bet to make the roster on the back end.

Countess was known as a heady player and a good special teams contributor coming out of Auburn. If he shows he can pick up the defense quickly and Dave Fipp likes him on special teams, he'll make the roster and dress on game day.

Mills was the pleasant surprise at Eagles OTAs and minicamp, impressing the media as well as established veterans. Malcolm Jenkins, for example, went as far as to say that Mills will be competing for a starting spot in 2016. It feels like Mills all but has a roster spot on lock.

That said, training camp is a very different animal when compared to OTAs. At training camp, the Eagles will be putting on the pads, and all indications say that Pederson intends on running a physical camp. Mills was good in coverage at OTAs. He'll have to show that he can be physical in training camp. I would bet on Mills playing a reserve slot corner role, but any talk of him starting is far too premature.

McAlister will have a difficult time making the team, as he has a long way to go before he's ready to play. To begin, while he has great length at 6'6, he's only 240 pounds. He wasn't very effective as a run stopper at Florida, and there's little reason to believe that he'll suddenly make massive strides there as a rookie in the NFL.

At best, at this stage McAlister is a situational pass rusher only, and even then he only has two pass rush moves. It doesn't help that he has a bevy of pass rushers way ahead of him on the depth chart. McAlister has a lot of raw ability, but he feels like a good bet either for the practice squad or a trip to the IR with a bruised toe.

Walker got a lot of reps at OTAs and minicamp, which makes sense, as the Eagles severely lack depth at linebacker. Walker is a good bet to make the team, and he could be "thrown to the wolves" should the Eagles suffer some injuries at his position. He could also contribute immediately on special teams.

If I were to pick the most likely undrafted free agents to make the roster, one of the linebackers, like Myke Tavarres or Quintin Gause, could have the best chance based on the Eagles lack of depth there. Former Oregon RB/WR Byron Marshall could also factor into the competition at a weak RB position.

The Eagles also spent quite a bit of money on OG Darrell Greene, while DT Destiny Vaeao got a lot of reps at OTAs and minicamp.