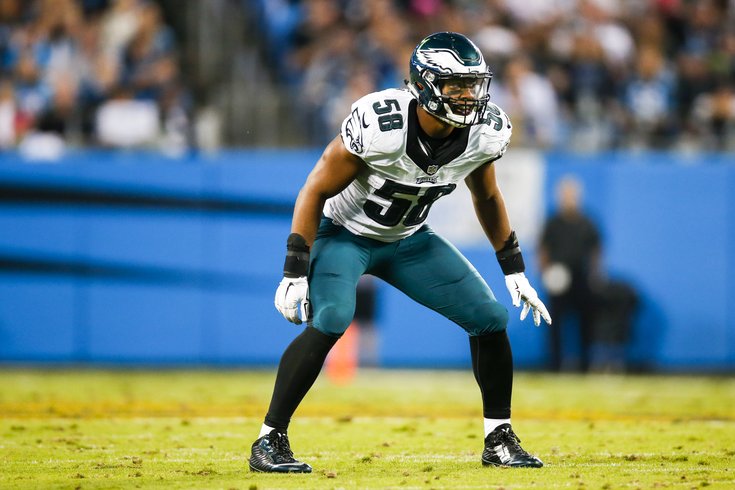 Heading into the 2016 season, the Eagles' linebacker position could be a major strength... or complete disaster. There probably isn't a positional group on the roster with as much "boom or bust" potential.

The three starters are set, with Jordan Hicks, Mychal Kendricks, and Nigel Bradham serving as the unquestioned starters. Beyond them, the Eagles' depth at linebacker is untested.

Let's look at the linebackers individually.

Hicks was a beast as a rookie. In the eight games he played, he had 50 tackles, three fumble recoveries, a forced fumble, a sack, two interceptions (including a pick-six), and he knocked out Tony Romo for half the season. Unfortunately, his season was cut short when he suffered a season-ending pectoral tear in the second meeting against Dallas.

The Eagles were pleasantly surprised when Hicks was still available in the third round of the 2015 NFL Draft, although he was likely still on the board because of his injury history at the University of Texas. In 2012, Hicks missed the final 10 games of the season with a hip flexor injury. In 2013, his season was cut short by an ACL tear.

Hicks is a gifted football player, but he must prove that he can be a durable one as well.

Like Hicks, Kendricks is athletically gifted, however, he must prove that he can stay healthy as well, as he has yet to play all 16 games in any one season in his four year career (although he has missed just nine games overall). Kendricks also has to show that he can play well consistently.

It appeared as though Kendricks had broken out during the 2013 season, when he racked up 106 tackles, 4 sacks, 2 forced fumbles, 4 fumble recoveries, and 3 interceptions. Kendricks was a blur, making plays all over the field, especially near the end of that season. However, his production fell off in 2014, and then again in 2015.

Kendricks is a very good blitzer, and at his best when he can attack downhill, as opposed to when he is asked to read and react. In Jim Schwartz's attack-style defense, Kendricks will have an opportunity to rejuvenate his career. At just 25 years of age, there is certainly plenty of room for Kendricks to become a better player.

Bradham was a former fourth round pick of the Bills in 2012. He had his best season with Buffalo under Schwartz in 2014 when he had 104 tackles, 2.5 sacks, 2 forced fumbles, an INT, and 7 pass breakups. Both Schwartz and current Bills coach Rex Ryan have cited Bradham's ability as a coverage linebacker.

Goode is a career special teamer. He and Deontae Skinner are the only Eagles backup linebackers with any experience at all, and even then, Goode only has one career start, which came in 2013. Barring another veteran linebacker addition, Goode is likely to start a game at some point this season, as it is unrealistic to think all three Eagles starting linebackers will remain unscathed for 16 games. For that reason, Goode is a very under-the-radar player of importance this season.

Walker is going to have play well on special teams to secure his roster spot, although certainly, a lack of depth at linebacker will help his chances. Walker feels like a player who will find a role on the team as a reserve or sub-package linebacker who sticks around in the league longer than your typical seventh-round pick, albeit as a back of the roster type.

If not for a good pro day performance, Walker may not have been drafted, but he impressed enough to be taken with the third-to-last pick of the 2016 NFL Draft. He is a solid tackler with good athleticism, although he lacks thump. I would project Walker to make the 53-man roster, and possibly even be active on game day as early as Week 1.

Long was a Chip Kelly favorite, who was poised to make the team in 2014, before he tore his ACL in the fourth and final preseason game against the New York Jets. The following August in 2015, he tore that same ACL once again in training camp. Long also tore an ACL in 2012 when he was with Washington State. With three ACL tears, Long has to be viewed as a long shot to make the roster.

Tavarres received the second-highest signing bonus among undrafted free agents in the NFL after the conclusion of the 2016 NFL Draft. That will all but guarantee him at least a spot on the practice squad. Tavarres is undersized at 6'1, 230, but he is an athletic linebacker. And he can do flips.

Guase is another undrafted free agent. At Rutgers a season ago, he had 96 tackles, 12 for a loss of yards.

Skinner managed to stick on the Eagles' practice squad for the entirety of the 2015 season. He is a thicker linebacker, at 6'1, 250. Skinner played in seven games for the Patriots in 2014, starting one.