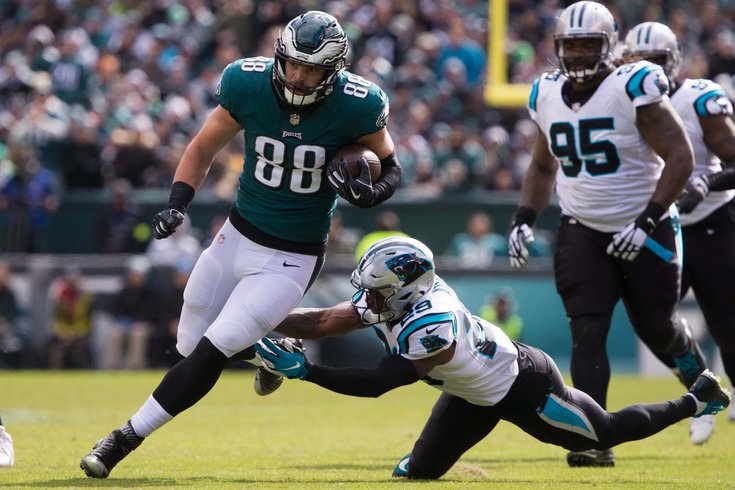 The Eagles traded back in 2018 and still ended up with a good player in Dallas Goedert.

The Philadelphia Eagles tend to move around in the first round more than most. Here we'll recap the last 18 years (since the beginning of the Andy Reid era), showing the Eagles' moves in the first round of the draft, and then we'll determine their best course of action in the 2019 NFL Draft:

By far, the best players are from the "trade up" group, and it's not even close.

So what will the Eagles do this year?

A season ago, the Eagles were sitting at pick No. 32, where many (self included) believe that there isn't much of a difference between the player you can get there, and the caliber of player you can get in the 40's. With a dearth of draft picks and the need for more cheap players playing on their rookie deals, we projected that the Eagles would try to trade back and acquire more picks, which they successfully did, while landing a player in Goedert, who many projected as a first-round talent.

The Eagles are currently slated to pick 25th in the 2019 NFL Draft. While their need for cheap talent remains, I believe the Eagles will be looking for an impact player in the first round.

"When we look back and we look at our drafts, specifically looking at where we were in the 20's, we've had some good success at 20 and higher," said Howie Roseman, speaking at the 2017 Senior Bowl, an offseason in which the Eagles held the 14th overall pick. "I think there is a line where you don't get a difference maker. This is your opportunity, in the first round of the draft, to find a difference-making player. That's our first priority, is bringing in a difference maker to the Philadelphia Eagles.

"By trading back and getting extra picks, but not having somebody who can affect the game... I mean, you're watching these championship games, and you're seeing that there are difference makers making big plays in these games, so we need to make sure that we come out of (the draft) with that."

The question for the 2019 NFL Draft is, where is the line between the impact players, and the dropoff? While the 2019 NFL Draft is thought to be a very deep and talented one, especially at a major position of need (the defensive line), my sense is that Roseman will still want to get up into the teens from the Eagles' spot at pick No. 25. The disastrous 2014 draft in which Eagles targets flew off the board before the Birds eventually settled on trading back and drafting Marcus Smith no doubt was a lesson learned for Roseman.

Unlike last year, Roseman will have the ammo to move up, as the Eagles are projected to have nine picks in the 2019 NFL Draft, and likely to have a bunch of extra compensatory picks in 2020 as well. I expect the Eagles to be aggressive on Day 1 of the draft.