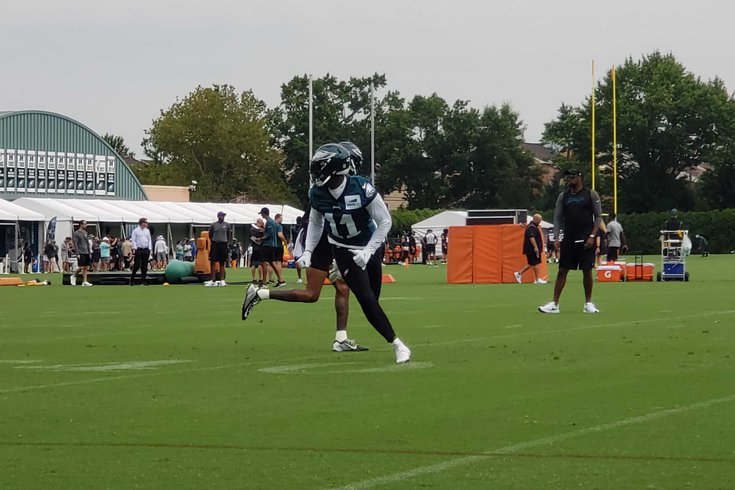 Philadelphia Eagles 2022 training camp is underway, and the Birds held a short, but spirited practice, with all the action occurring in the red zone. Let's get right to the notes.

• First, there are some roster moves and injuries to get to.

As for the initial injuries, there is very little to report. Jason Kelce, Fletcher Cox, Anthony Harris, and WR Keric Wheatfall are all ramping back up from having COVID. Kelce and Wheatfall did not practice, while Cox and Harris were limited. Zach Pascal was out with an illness.

• All eyes are going to be on Jalen Hurts throughout camp. Day 1 was a little shaky, which is to be expected. I thought he had three lowlights:

Again, to be expected. The offense tends to be sloppy the first few practices before they get their sea legs.

Certainly, it wasn't all bad. The highlights:

If we're grading Hurts each day in terms of stock up, stock down, and neutral, I'd call it a neutral day. 😐

Again, Kelce was out today.

• Miles Sanders has been on a multi-year quest to regain his receiving prowess that he had for one season as a rookie in 2019. He triple-caught his first target of camp. 😬

• When the Eagles were in man-to-man, Darius Slay mostly covered DeVonta Smith, while James Bradberry covered A.J. Brown. That makes sense. Bradberry will likely be tasked with checking the bigger receivers, while Slay will likely handle the speedier guys or savvy route runners.

• We mentioned that Brown had a TD catch from Hurts above. He also had a fumble after a short reception. T.J. Edwards punched it out.

• Jalen Reagor had a nice start to camp. He had a pair of TD catches working with the second team offense. Obviously, he's been demoted, and maybe he can get back on track with less attention on him. I should note that there's a perception that Reagor got positive pub for having a strong camp last year. Not so. He had a couple of highlight reel catches, but I did not think he had a very good camp overall. If he can consistently stack days, that's a good sign that he can maybe be useful in some capacity in 2022.

• Gardner Minshew had the best throw of the day, when he threaded the needle to rookie TE Grant Calcaterra in the back of the end zone. I should note that Calcaterra was active in his first Eagles training camp practice, and he ran a good route on his TD catch.

• K'Von Wallace had a rough day. On one play, Epps was barking at Wallace because Wallace was in the wrong spot. While Wallace was trying to figure out where he should be, Boston Scott took a handoff and scored in Wallace's area. On the next play, on the Watkins TD in the back of the end zone referenced above, the ball whizzed over Wallace's head. Wallace was late to see it, and could not get his hands up in time to deflect the pass.

• One of the concerns about Nakobe Dean's game in the pros is how well he's be able to shed blocks, particularly when he's disadvantaged with his small stature. On one run play, Jack Driscoll did a nice job of getting to the second level, locking onto Dean and not allowing him to get free.

• In his post-practice press conference, Brandon Graham says that he is a "full go."

• There were five returners fielding punts today. They were Jalen Reagor, Greg Ward, Quez Watkins, Britain Covey, and Lance Lenoir. Reagor was up first on those reps, if that means anything.

• Throughout training camp, I'll have some occasional one-on-one interviews with other Eagles beat writers while the players are stretching and doing other boring stuff. They'll mostly be around 10-15 minutes long. Batting leadoff was Eliot Shorr-Parks of WIP. Fun convo, IMO. Listen below. And here's the iTunes link. Review, subscribe, etc.