Power rankings roundup: Eagles have "eyes on the playoffs" 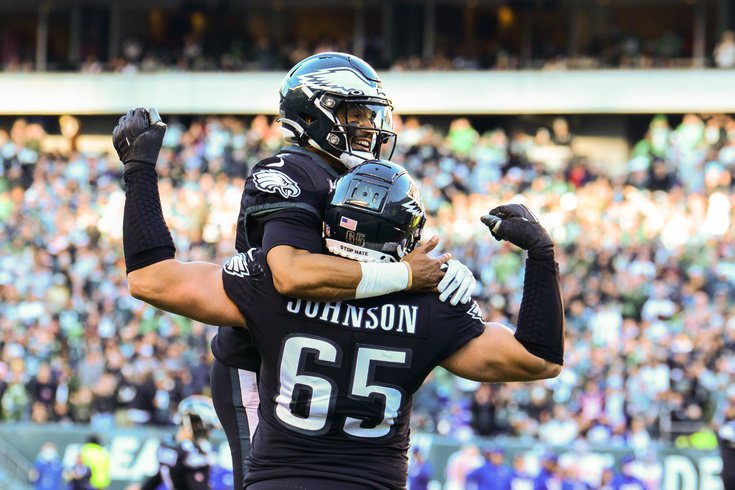 Jalen Hurts after throwing a touchdown pass to Lane Johnson.

The  Birds are back! Training camp practice at the NovaCare Complex on Wednesday will be open to the media and the city is buzzing with football season on the horizon. As writers like myself gear up for practice, let's take a look at how different sites and platforms are ranking the Eagles among all NFL teams as camp starts...

Bleacher Report's "NFL Scouting Department" did power rankings on Instagram (@brgridiron). The Eagles came in slightly above average at 14th. Dallas came in at ninth, which I have some qualms with! The Cardinals were two spots ahead of the (real) Birds at 12. Let's be real: the Eagles are the best bird team in the NFC. It's reasonable to have the Ravens over them. Don't get me started on Edgar Allan Poe being more of a Philly guy than a Baltimore guy when we're on the topic of Ravens though!

Over at Pro Football Focus, Sam Monson has the Eagles 13th, one spot behind the Cowboys, in the "Eyes on the Playoffs" tier. Here's what Monson says about the Birds:

I’m not sure any franchise had a better offseason than the Eagles when all is considered. Trading for A.J. Brown gives them the No. 1 receiver they have been searching for, and it also allows DeVonta Smith to concentrate on doing what he does well as the No. 2. Adding Haason Reddick and Jordan Davis reinforces a defensive front that was eroding from its peak, and grabbing James Bradberry late in the day is a really shrewd signing that could make a real difference. Georgia linebacker Nakobe Dean could also prove to be one of the biggest steals of the draft if he’s the same player in the NFL that he was in college. [PFF]

Winning the offseason: a Howie Roseman tradition unlike any other.

FanSided's NFL Spin Zone has the Eagles slightly better at 12th, but they are once again behind the Cowboys, who are one spot ahead at No. 11. Here's what writer Randy Gurzi said about the Birds:

Nick Sirianni is an interesting dude. The Philadelphia Eagles head coach seemed incredibly uncomfortable in his opening presser, then raised some eyebrows when he started playing Rock, Paper Scissors with potential draft picks to test their competitiveness.

While his approach was unorthodox, he proved that he knew what he was doing by taking the Eagles to the postseason following a slow start to his rookie campaign. Now, they added some beef to their defensive line with Jordan Davis and brought in A.J. Brown to compliment DeVonta Smith.

The one question left is whether or not Jalen Hurts is their guy. Should he develop into a legit starter, Philly could become a problem. [FS]

I can't wait to see how Jordan Davis performs during camp. Davis and the entire defensive tackle rotation made my list of five training camp storylines I'll be watching closely over the next several weeks.

The most important rankings of all: "Madden" rankings! The Eagles are tied for 10th with the Bengals in the overall team ratings for "Madden NFL 23" with an 85. Once more, they're behind the Cowboys, who are tied for seventh with the Chiefs and 49ers at 86. Our own Nick Tricome did a big look at the Eagles' "Madden" ratings last week. I don't have a big current generation video game system ("Madden" doesn't make games for Nintendo Switch sadly), but I'd absolutely love to roll around the pocket a million times with Jalen Hurts before firing a pass along the right sideline to DeVonta Smith.