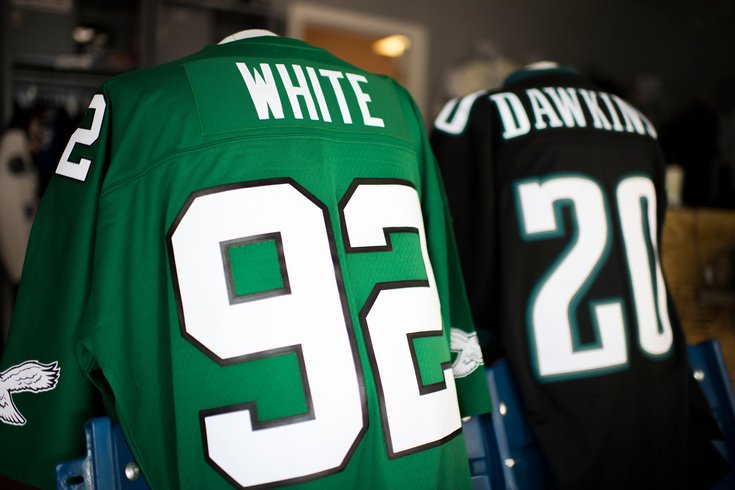 The Eagles should be wearing throwback jerseys sometime in 2023.

The Philadelphia Eagles — and the rest of the NFL, for that matter — are in Palm Beach, Florida for the NFL owners meetings, AKA the venue where we get our yearly update on Kelly green jerseys.

To begin, the Eagles will wear Kelly green jerseys (and helmets) in 2023, according to Jeffrey Lurie. They will wear black alternate helmets in 2022.

Huh? Why not just Kelly green jerseys right away?

Well, let's start from the beginning. The Eagles last wore Kelly green jerseys (and helmets) during the 2010 season. Thereafter, the league implemented a rule that teams could only have one helmet color, on the basis that players would always wear the same helmet, which apparently at the time was viewed as some sort of player safety precaution. Occasionally, you might see teams like the Packers or Bears wear throwback helmets, but only the decals changed, not the base color of the helmet.

In June of 2021, however, the league approved a new rule that allowed for teams to have one alternate color helmet. But in a cruel twist, the football gods seemingly did not want the Eagles to wear Kelly green yet, and the Birds' plans were delayed because they had already submitted black as their alternate color, as explained by Rob Tornoe of The Inquirer:

Sources with the team said the NFL deadline for uniform selection for the 2022 season has already passed, and the Eagles submitted their black alternate jersey. Any new helmet the team could wear would have to work with those uniforms. So barring a change from the league, fans won’t get to see the Birds in Kelly green until 2023 at the soonest.

What?!? Why couldn't the league just allow the Eagles to change their alternate color? What's the big deal? Well, the short-short explanation is that Nike needed a certain amount of lead time in order to incorporate Kelly green into their color scheme. In other words, it's not like the league was needlessly denying the Eagles from wearing Kelly green.

So you'll have wait one more year for for the Kelly greens, but there's at least something new in 2022 for the black helmets, and it might actually look pretty cool.