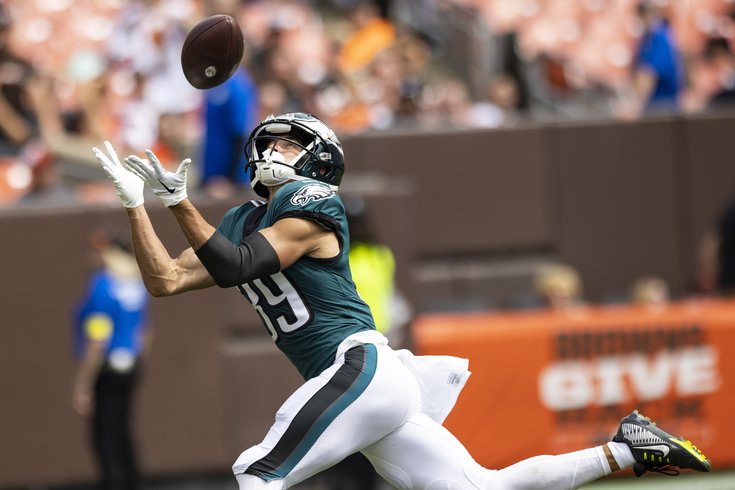 The Philadelphia Eagles have announced their initial 2022 practice squad. If history is any indication, some of these players will be called up during the season and asked to play roles in meaningful games.

• QB Reid Sinnett: Sinnett entered training camp as the perceived QB4 behind Jalen Hurts, Gardner Minshew, and Carson Strong. He quickly established himself as the QB3 ahead of Strong, but is right back at QB4 after the Eagles claimed Ian Book off of waivers from the Saints.

Perine comes from a family of running backs, which includes NFL players such as Bengals RB Samaje Perine, and Steelers LB Myles Jack, who doubled as a running back in college. We profiled him in our college prospects series once upon a time. He doesn't have great speed, but he runs with patience and vision, using mini jump cuts to pick his way through traffic, and finishing with power.

• RB Kennedy Brooks: Brooks is an undrafted rookie who looked OK in the preseason games, running for a TD that was called back, but ultimately not showing enough to crack the initial 53.

• WR Devon Allen: Allen has pure speed and athletic talent, which translated into a big play on offense in the Browns preseason game as well as a few impressive plays on special teams against the Dolphins. He is absolutely worth further development behind the scenes.

• WR Deon Cain: Cain was a fan favorite this preseason, but he was always likely to clear waivers. Assuming Greg Ward is not re-signed to the practice squad, Cain would likely be the first receiver the Eagles would look to call up to the roster if they need someone to fill in on the regular offense due to injuries.

• WR Britain Covey: It looked for a while during training camp like Covey might make the 53-man roster, but his full body of work didn't warrant his inclusion. Now that the Eagles have traded Jalen Reagor, Covey could be a player who joins the active roster soon because of his punt/kick return ability.

• TE Noah Togiai: Togiai had a solid training camp and preseason, but was not claimed by another team like he was when the Colts snatched him up in 2020. Togiai could be a capable player worthy of a call-up if needed.

• OL Le'Raven Clark: Clark spent most of the 2021 season on the practice squad. In December, the Eagles elevated him to the 53-man roster and signed him to a one-year contract extension. He started in the practice squad game against the Cowboys Week 18, and filled in for an injured Lane Johnson instead of Andre Dillard against the Bucs in garbage time in the playoffs. He had a very shaky camp/preseason.

• OL Kayode Awosika: If anyone sees Bo Wulf, tell him I'll take the chicken cutlet with prosciutto and sharp provolone.

• DT Marvin Wilson: Big Marv might've made the final 53 in past Eagles camps, but the interior defensive line depth is too crowded for him to stick this year. I thought he was a waiver claim candidate, but nope, he's back.

• CB Mario Goodrich: Goodrich signed with the Eagles as an undrafted free agent out of a major college football program at Clemson. He did not get much playing time early in his college career, sitting behind a number of corners who are now in the NFL. As a senior in 2021, Goodrich had 42 tackles, 2 INTs (including a pick 6), 9 pass breakups, and a forced fumble. He showed some physical ability in training camp, but is limited athletically.

• S Anthony Harris: Could Harris re-join the roster after Week 1, when his salary would no longer be guaranteed?

• S Andre Chachere: Chachere is 26 years old and is on his sixth team in five years. There was never much of a risk of him clearing waivers, and the Eagles now have a decent special teamer on the practice squad should they need him.

• iOL Jack Anderson: Anderson is a roster-worthy player who was a victim of a numbers game in Philadelphia. He joins a Giants team loaded with former Bills coaches. Anderson was drafted by the Bills in 2021.

• CB Josh Blackwell: Blackwell was claimed by the Bears. He waived by the Eagles at 80-man cutdowns, and the Bears didn't pick him up at that time, but they like him now? Odd.