Week 3 NFL picks: Rounding up the experts' predictions for Eagles at Commanders 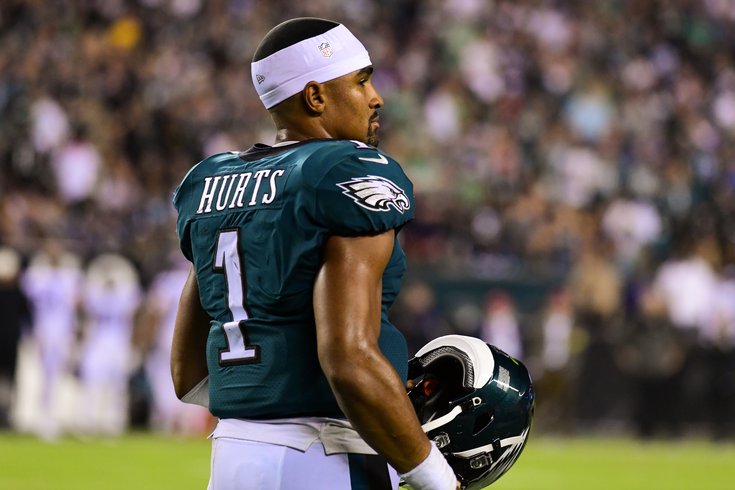 Can Jalen Hurts follow up his impressive Monday night performance?

The Eagles are flying high after a Monday night drubbing of the Minnesota Vikings.

Now, on a short week, they'll take on their former quarterback Carson Wentz and the Washington Commanders in their first NFC East matchup of the year, looking for their first 3-0 start since Wentz led them to it back in 2016.

Can they pull the Eagles pull it off? Many sure seem to think so.

Our writers definitely do.

The Eagles aren't in store for a disaster-class 2020 Carson Wentz performance, but they will get the best of their former franchise quarterback in Landover. This is one where the final score isn't as indicative of how much the Eagles were in control, perhaps a late touchdown toss from Wentz makes it looks closer than it really was and pads his stats a bit.

The storyline will be Wentz playing his former team, but the key subplot to me is Jalen Hurts squaring off with the guy he wanted to overtake as the Birds' QB1. He would never say that to the media, but he's human and a gamer. Hurts' intangibles, leadership and "vibes" are always discussed, but his on-play performance is now matching that level. Hurts thoroughly outplays Wentz in this one as the Birds cruise to 3-0 for the first time since 2016. [PhillyVoice]

Lets' take a look at how everyone is feeling...

• Inquirer.com: The Inquirer beats are running with the Eagles in this one too. After the secondary picked apart Kirk Cousins on Monday night, they should be able to have a field day against Wentz so long as the defensive front can make him rush his decisions, as Josh Tolentino pointed out:

With Wentz under center, there will be additional turnovers for the taking. If Gannon dials up pressures and blitzes at proper times, there’s a chance the secondary will feast on Wentz’s rushed throws. Through two games, Wentz has already thrown three interceptions. The Eagles had three interceptions alone off Cousins.

The Commanders boast a formable defensive front, but they’ll be matched up against one of the best offensive lines in the NFL. If Hurts takes care of the ball, that should be enough to lead the team to 3-0. [Philadelphia Inquirer, $]

• The Athletic: The Eagles are a 6.5-point favorite to beat Washington and the offense has shown it can definitely put up points after the first two weeks, but can the team as a whole win and cover that large of a spread? Senior writer Vic Tafur over at The Athletic thinks "yes" to the former, "no" to the latter:

The Carson Wentz revenge game against the Eagles. Yeah, baby.

The Commanders couldn’t stop Jared Goff last week, so what the heck are they going to do with eventual fantasy football MVP Jalen Hurts? And Miles Sanders averaged 7.4 yards a carry last week. (Washington is the only team to already allow two runs of 50-plus yards, while 25 teams haven’t even allowed one.)

We’re just asking Wentz to not throw the ball to Darius Slay and for a talented receiving corps to keep it close and not lose big at home to a team that played Monday night.

• Gregg Rosenthal, NFL.com: An Eagles 30, Washington 23 prediction. "Erratic yet surprisingly fun" is a pretty accurate summation of a Wentz-led offense.

The Commanders’ offense is erratic yet surprisingly fun. They have enough playmakers and derring-do to bring the Eagles back to earth. But the communication problems on Washington’s defense and lack of pass rush are all too reminiscent of 2021. Like most teams facing Philly, the Commanders aren’t tough enough. [NFL.com]

• ESPN: Another unanimous sweep for the Eagles here, who at this point have become the pretty clear frontrunner for the NFC East.

• Pete Prisco, CBS Sports: A close score, but one that the Eagles will ultimately come out of on top. It's the road game on a short week that's the lead factor here.

The Eagles are flying high behind the play of Jalen Hurts. He has been outstanding as they've rolled to a 2-0 record. But this is a game on the road on a short week. The Commanders are coming off a tough loss, but I think they will hang around in this one. It's tight.

• ProFootballTalk: Eagles in a pretty easy call for the crew over at PFT.

MDS’s take: Jalen Hurts vs. Carson Wentz should be a fun matchup, and I like Hurts to get the better end of it and show why the Eagles were wise to make him their franchise quarterback.

Florio’s take: The Eagles are looking like a team of destiny. That’s something the Commanders haven’t looked like in more than 30 years.

• USA TODAY Sports: And an easy call for the FTW team at USA Today as well.

If Jalen Hurts is going to continue playing the way he did on Monday night, the Eagles don’t have a ceiling.

Philly could put up 40 in this one.

Expecting a Carson Wentz revenge game, in the sense that the Eagles’ defense will get revenge for the Wentz era. Honestly, the Washington QB should be having Darius Slay nightmares already.

The Eagles are good! [USA Today]

• Sheil Kapadia, The Ringer: Jalen Hurts joined some special company with his performance Monday night and will go up against an arguably weaker Commanders defense this weekend.

Three times in NFL history has a quarterback thrown for 300-plus yards and rushed for 50-plus yards while completing over 80 percent of his attempts:

Jalen Hurts on Monday night against the Vikings

That was the best game of Hurts’s career. He was accurate, made plays from inside the pocket and outside the pocket, and was in full command.

The Commanders fell behind 22-0 against the Lions before making it close in the second half. When Carson Wentz has had time, he’s connected on some nice throws downfield. When he’s been pressured, it’s gotten ugly. But the biggest issue for Washington is on the other side of the ball. The Commanders defense has had too many miscues. I think Hurts takes advantage.

The Carson Wentz revenge game is here. Wentz has back-to-back 300-yard games for Washington, but the defense needs Chase Young back and it shows. Philadelphia is working off a short week, but Jalen Hurts and A.J. Brown continue to refine their connection. That opens lanes for the running game, too. The teams have split the last four at Washington, and all four games were decided by 10 points or less.

Carson Wentz gets a home revenge game opposite Jalen Hurts. The Commanders' defense is an absolute mess that cannot stop the power running or downfield passing game. Hurts will have his way with A.J. Brown and he and the Eagles also will rack up with a big rushing attack. Wentz and Washington have added firepower and Philadelphia has some real defensive holes, but he's more likely to make a critical mistake or two than Hurts.