Ertz out all preseason after surgery to repair 'core muscle injury' 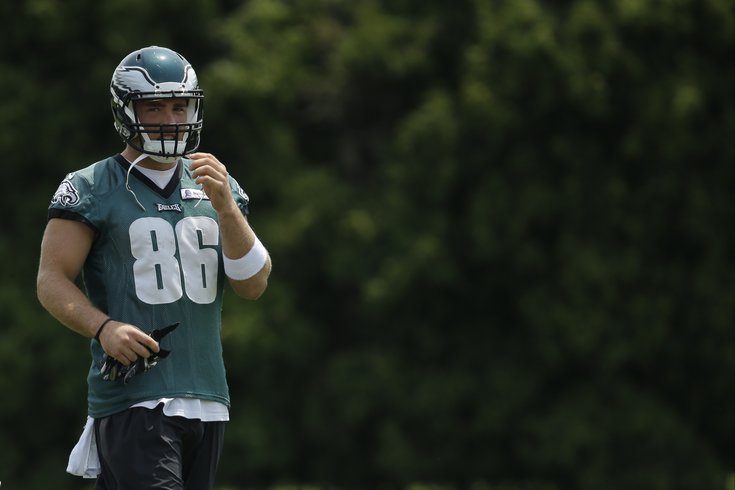 There is still no definitive answer from the team as to the specifics of the injury, although it seems to be a partial tear of the groin, similar to -- but not as severe as -- the sports hernia injury suffered by center Jason Kelce last season. Another key difference is that Kelce's injury was in his abdomen rather than his groin.

Ertz will have a procedure on a minor groin tear, teammates say. Not as serious as what Jason Kelce went through last season.

Zach Ertz doesn't have a sports hernia, per sources. It's a groin strain (partial tear). #Eagles

And if you're confused as to whether it's a groin tear or a sports hernia, don't be. Both are technically correct. According to the American Academy of Orthopedic Surgeons, the term sports hernia refers to "a strain or tear of any soft tissue (muscle, tendon, ligament) in the lower abdomen or groin area."

A theory on why there are different terms being thrown out there could be that "core muscle injury," the term the team used, is the broadest description and also sounds the least threatening. Sports hernia, again, is just a broader description of the injury Ertz reportedly suffered, but tends to sound more serious and foreboding than a "partial groin tear," which is also much more specific than the other terms.

But no matter what you call it -- "core muscle injury," groin tear or sports hernia -- it will sideline the third-year tighten for the remainder of the preseason.

When the Eagles open the preseason on Sunday against the Colts, the team will be without one of the offense's best young weapons, tight end Zach Ertz. In fact, they won't have him at all for the rest of the preseason, according to head coach Chip Kelly.

"Zach has a core muscle injury," Kelly said Friday during his meeting with the media. "He's probably going to be out for a couple weeks now."

"I think he'll be back for Week 1," Kelly added. "But I think, right now, he's out. He's with Dr. [William] Meyers today, so it'll be a couple weeks with him. But he's not going to play in the preseason."

Calling it a 'core muscle injury' is vague, but given the timetable for his return and the fact that he's seeing Dr. Meyers, who specializes in sports hernias, it's a safe bet that's what has been plaguing Ertz, who hasn't practiced the last few days..

Last season, center Jason Kelce missed five weeks (four games and a bye week) with a sports hernia, so depending on the severity of the injury, it's not out of the question to think Ertz could be ready for Week 1.

And according to Kelly, the team would rather get it out of the way now when the games don't count than risk losing Ertz for a stretch in the middle of the season.

"I don't know," Kelly said when asked if Ertz was having a procedure done. "But we just wanted -- whatever it is -- Dr. Meyers said it's going to be a couple weeks and thinks he'll be fine by the opener. So I said, 'If we've got to shut him down, I'd rather shut him down now than have to shut him down sometime in the middle of the season.'"

Last season, Ertz caught 58 passes for 702 yards and three touchdowns, an improvement over his rookie numbers of 36 catches, 469 yards and four touchdowns. But he'll be playing with a new quarterback this season in Sam Bradford -- he'll also miss the preseason opener, but should play in the second game -- and not having adequate time to develop a rapport with one another could be an issue.

But Kelly insists that having a healthy Ertz for the regular season is more important than developing a chemistry with Bradford.

"The biggest thing for us in this situation, to be honest with you, is that it's something that we wanted to get cleaned up," he said. "So the reps weren't really important. I think, in the longterm, [Ertz is] going to be a lot better for it. We just wanted to get it out of the way."

Many expected Ertz, who worked on his blocking all offseason and even consulted with one of the all-time greats in Tony Gonzalez, to have a breakout season this year. And that can still happen, but for those hoping to see some flashes of things to come in the preseason will just have to wait.

In the meantime, Kelly is banking on a trio to undrafted free agents -- Andrew Gleichert, Eric Tomlinson and Justin Tukes to fill in during the preseason. And so far this offseason, he's seen flashes from all three.

"It's one of those things where, daily, it's kind of a different guy shows up," Kelly said of his rookie tight ends. "Eric Tomlinson came out in the last two days and made some big catches for us in the red zone. All three of them have size. Andrew [Gleichert]'s a really sharp player who really picked things up quickly. And then Justin [Tukes] is starting to really come along.

"Excited to see those three guys. So one of the byproducts of not being able to have Zach for a couple games here in the preseason, we'll give those guys an opportunity to show what they can do. Because we have three guys in [Brent] Celek, Ertz and Trey [Burton] that we're really confident in. But really trying to figure out who that fourth guy is. And I think it's really a toss-up, but all three of those guys have at time been like, 'Wow, they've got a legitimate shot at making this football team.' Let's see how they can do it on a more consistent basis."

Hopefully, once the season rolls around, Ertz will be back and the Eagles won't have to rely on rookie free agents. But if they do -- even if only for a week -- Kelly and, more importantly, Bradford, will have a better idea of what to expect.