Sam Bradford will sit out the Eagles' first preseason game 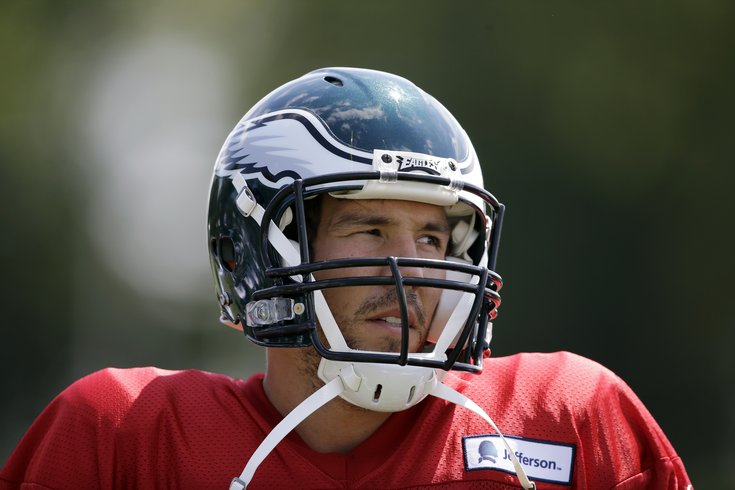 Sam Bradford will be toting a clipboard for the Eagles' first preseason game against the Colts this Sunday. Chip Kelly said during his Friday press conference that the starter will be Mark Sanchez.

"Sam will not play," said Chip Kelly. "That is my decision. He wants to play. I don't think he's real happy with my decision. I just felt he's been (playing) two weeks in a row, he's done a nice job, he'll get his first work against the Ravens where we get a chance to train with them for a couple days before we play, and he'll play in the Ravens game. But Mark will start the game.

"I think he can go. I know he's disappointed, but it's just my call."

A few days ago, we noted that Bradford has barely moved during training camp, and did not look ready to face an NFL pass rush.

A few Eagles media people have noted that Bradford doesn't look hurt. That is a statement with which I agree. He's not limping, nor does he show any sign of pain after his reps. However, not looking hurt and not looking 100 percent (which he clearly is absolutely not) are two different things. From what I've seen, unlike the other quarterbacks, Bradford does not attempt sudden movements to get away from defensive linemen, who, of course, do not touch the quarterbacks in camp. I'm not sure I've even seen him sprint yet. In other words, while it is true that he doesn't look hurt, he shouldn't, because he barely moves.

The Eagles will have to decide if Bradford is ready to face an NFL pass rush on Sunday. Personally, I don't think he's ready, although the Eagles may. If Bradford does play, and he probably will, expect a lot of run plays and very quick passes. Otherwise, Bradford is a sitting duck.

In the past, the projected starting quarterback has played the first preseason game under Chip Kelly. Furthermore, when you have a new quarterback in your offense, you typically want to see him in game action as soon as possible. It's not much of a leap to come to the conclusion that the Eagles have some level of worry about Bradford's readiness to play in live game action.

Kelly did commit to Bradford playing against the Ravens in the second preseason game on August 22nd, which will give Bradford more time to be ready to play. We'll see.