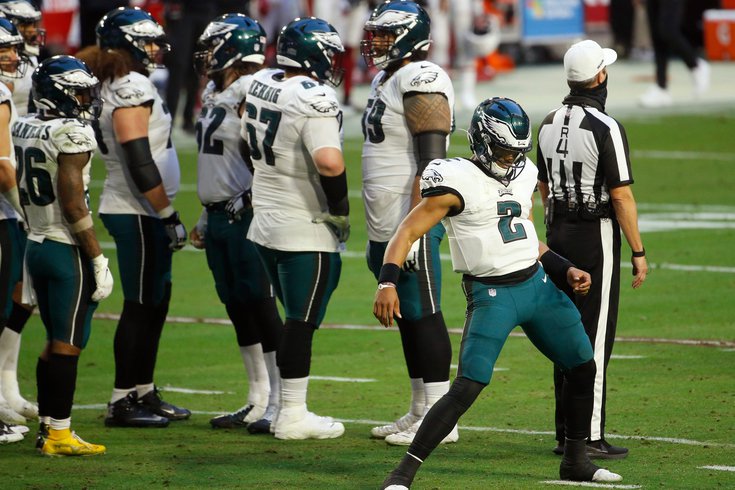 The caption said that this was Jalen Hurts stretching, but that sure looks like a dance to me.

The Eagles will open their 2021 season on Sunday in Atlanta when they take on Matt Ryan and the Falcons. We've already taken a look at some season-long predictions for the Eagles, as well as 10 different over/unders for the entire season — the first five can be found here, with the rest here — but now it's time to switch our focus specifically to the Birds' Week 1 matchup against Atlanta, a game in which Nick Sirianni's team are a 3.5-point road underdogs pretty much across the board at Sidelines.io.

We've given you the matchups to watch, a breakdown of the latest injury report, plus our own predictions and a roundup of who the local and national media are picking. Now, as we do each Saturday, here are five Eagles numbers to watch for in the form of our Week 1 over/unders...

[A quick reminder for those new to our over/unders: Unless explicitly stated otherwise, these are my own numbers based on how I think the players/teams will perform on Sunday — and the advice that follows is where I would put my money if I had to. This week, interestingly enough, these are all real numbers you can bet on over at FanDuel.]

In our weekly predictions, we were split 4-3 over the outcome of the game. But that wasn't the only area in which we couldn't come to an agreement, as we were similarly split over whether this game would hit the over or not. In both cases, yours truly (Eagles and the under) was in the minority.

So why do I think it's going to be the under? Neither of these teams were great at scoring the football last year and both are going to be rolling out new offensive systems under new coaches — and in the Eagles case, they're also starting a new quarterback. Early season football already seems tilted in the defense's favor, especially since the game already favors offenses. Things could get a little sloppy on offense for both teams, especially if the Eagles defensive front can put pressure on Matt Ryan. Of course, this probably means we're heading for a shootout, but since my prediction is for just 43 total points, not taking the under here would be a little weird.

For all the knocks on Hurts' arm — and that seems to be where the biggest criticisms of the second-year QB are placed — he was actually able to rack up some serious passing yards in each of the three games he started and finished. After posting just 167 yards through the air in his first start, Hurts threw for 338 and 342 in his next two starts, good for an average of 282.3 yards, well above what he'd need to hit this number.

I expect the Eagles to give the Falcons a heavy dose of the ground game in this one — and Hurts figures to be a huge part of that — but I also think with a healthy offensive line and a suspect Falcons secondary that the former second-round pick can put up some impressive numbers in this one. Sure, it's the first game of the season and Hurts didn't play much in the preseason, but Sirianni believes the reps he got in practice, specifically the joint practices, will be enough for his young QB. For now, we'll have to take his word for it.

The rookie wideout is obviously one of the big storylines coming into this one. And while he bounced back from an early injury to play in at least one of the preseason games, he didn't have any preseason game reps with Jalen Hurts. Will that hurt their chemistry in Week 1? Maybe slightly, but I think asking Smith to catch four passes in this one is a no-brainer.

He's the Eagles newest toy, he's their best wide receiver, and the last time he played in Mercedes Benz Stadium in the SEC Championship game, he posted 15 catches for 184 yards and a pair of touchdowns. That performance would be overshadowed a few weeks later by his ridiculous showing in the National Championship game, but it's clear this kid likes putting on a show in the biggest games of his career. And his NFL debut would certainly qualify as that. I'll go seven receptions, 92 yards and a touchdown. Nothing too flashy, but a solid and promising debut.

MORE: How good are the Eagles expected to be this season?

I think DeVonta Smith is going to be really good. I think Kyle Pitts might be a generational talent — and that's not a local bias toward the Philly-area product, he's just that good. Sure, we'll have to see how his skills transfer from the SEC to the NFL, but there's no reason to believe he won't pick up right where he left off in college. The fourth overall pick and Archbishop Wood alum will be taking on his hometown team in his first game, and I don't expect him to take it easy on them.

Pitts is a matchup nightmare for any team, and the Eagles are no different. They did upgrade their safety position by adding Anthony Harris and the linebacker spot with Eric Wilson, and while this is certainly going to prove to be a difficult test for them, it's just the first of several. The Eagles play George Kittle and the 49ers next week followed by a Week 4 matchup against Travis Kelce and the Chiefs. Yikes.

For now, however, the focus is on Pitts, who could feast against zone coverage while making man-to-man matchups a nightmare for opposing defenses. And at this point, we don't even really know exactly what new defensive coordinator Jonathan Gannon's system is going to look like, plus K'Von Wallace will be making just his 4th NFL start with Rodney McLeod still not ready to go. The back 2/3 of the Eagles defense — you know, the part we're not quite as certain about — is going to be tested in this one and will have to hope the line can get some pressure on Ryan, which we expect to be the case. If they can, that might hurt the production of a guy like Calvin Ridley, but might make a guy like Pitts a more reliable short target when Ryan needs to get the ball out quickly.

The Eagles appeared cautious with Miles Sanders in the preseason, and with another game being added to the schedule, that's probably the right move. But it's worth wondering how that carries over into the regular season. It's pretty obvious that Sanders is the team's top running back and will get the majority of the carries, but with Boston Scott and promising rookie Kenneth Gainwell behind him, the Eagles should be able to spread things around enough that they won't have to overburden Sanders early. Add to that the fact that Hurts will likely get his fair share of carries as well, and it becomes increasingly difficult to see Sanders getting 15 carries.

Last year down the stretch, Sanders average just 13.3 carries per game over his last seven games of the season. If you add in his receptions, that number climbs close to 15.5, but this line is only about his rushing attempts. And sure, this is a different year with a different QB and different coach running his own system, but I don't think they want to give Sanders too much work too early in the season.

I think 15 carries per game is a nice number for him to average over an entire season, but like a pitcher still getting into mid-season form, the Eagles might opt to ease him in early on in order to keep him as healthy as possible, something that has been a focus of Sirianni's staff throughout his short time here.

MORE: Eagles mailbag: What does Jalen Hurts have to do to be the long-term QB1?