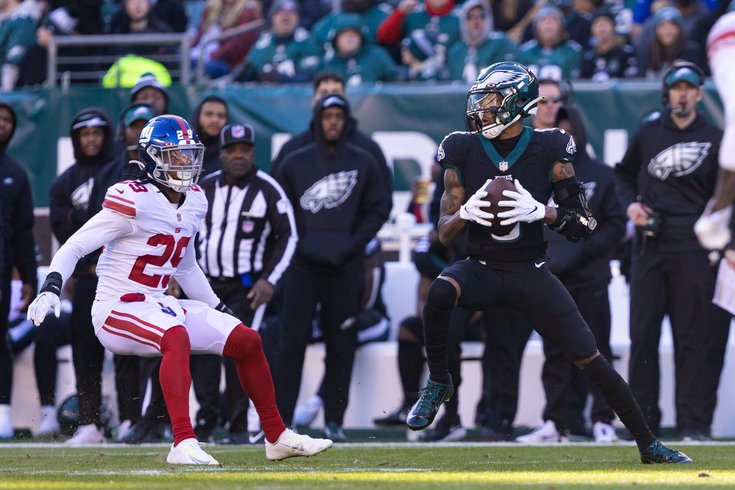 DeVonta Smith could take advantage of a depleted Giants secondary on Sunday.

The Philadelphia Eagles will face a familiar foe on Sunday when they take a trip up the NJ Turnpike to take on the overachieving 7-4-1 New York Giants. Here are our five matchups to watch.

1) The Eagles' run defense vs. Saquon Barkley and Daniel Jones

Here are the six run-heaviest offenses in the NFL:

The Bears, Titans, Giants, and Cowboys make up five of the Eagles last six opponents.

Here are the NFL's top 13 rushers this season:

The Eagles have already faced Henry, Cook, Taylor, Pierce, Pollard, Jones, Etienne, Williams, and if you want to include joint practices during the summer, Chubb. They still have to face Barkley x2, Pollard, and Fields. Anyway, my apologies in advance if the Eagles' opponents' rushing attacks become a little repetitive in this series.

This week the challenge will be stopping Barkley, who as you can see above has the fourth-most rushing yards in the NFL this season. They'll also have to find a way to stop Daniel Jones from beating them with his legs, as he has carried 91 times for 522 yards (5.7 YPC) and 3 TDs this season.

When the Giants got out to a hot 7-2 start this season, Barkley was the focus of the offense, as he had 227 touches, or 25.2 touches per game. That over-usage may have caught up to him, as Barkley has slowed down considerably after a 35-carry game against the Texans Week 10. Over his last three games — a stretch during which the Giants went 0-2-1 — Barkley has not looked like the same player.

Still, Jonathan Gannon would be smart to employ the Jim Schwartz method of defense (stop the run, make the opposing offense one-dimensional, attack the passer) that worked so well last Sunday against the Titans. Because, well, the Giants don't have much at receiver... 👇

2) The Eagles' secondary vs. the Giants' injury-wrecked wide receivers

Here are the Giants' wide receivers' stats this season:

The Giants lost Robinson, Shepard, and Collin Johnson (during training camp) for the season due to injuries, and they traded away Toney. The most dangerous player who is left standing is Slayton, who has some down-the-field ability, as the Eagles have learned in the past. From last Sunday against the Commanders:

Jones is comfortable just chucking it downfield to Slayton and letting him make plays on the ball, which makes sense because what else does he have?

The Giants' offensive line has been banged up this season, as they had to play the Cowboys on Thanksgiving with four starters out of the lineup. Most of those guys will be back in the lineup against the Eagles. On Sunday, the early guess is that it will look like this:

It's possible that Ben Bredeson could return to the lineup after being activated from IR last week, which... who cares.

After a shaky start to his professional career, Thomas has become a Pro Bowl-level LT. Otherwise, this is not a good offensive line, as the Giants have allowed 37 sacks this season, fifth-most in the NFL.

Neal was the seventh overall pick in the 2022 NFL Draft, and like Thomas he has struggled early in his career. He was a 6'7, 350-pound beast in college at Bama, with extreme athleticism for a player his size. You can go ahead and file the following video under "things I might die trying to do."

The potential is there for Neal to be great, but right now he is a liability. In 8 games this season, PFF has him down for 5 sacks and 16 pressures allowed. That is a matchup that can be won by Haason Reddick and Brandon Graham.

And then on the interior, the Giants have a collection of JAGs (JAG = "just a guy"). Expect the Eagles to continue to heavily rotate their impressive depth at DT and wear those guys out.

The Eagles' offense under Hurts has been versatile and explosive this season, but there have been times that blitz-happy defenses have taken them out of their game. The Cardinals in Week 5, for example, blitzed the crap out of Hurts, and the offensive staff countered with a horizontal passing approach that took away the Eagles' explosiveness. Hurts' spray chart from that game: 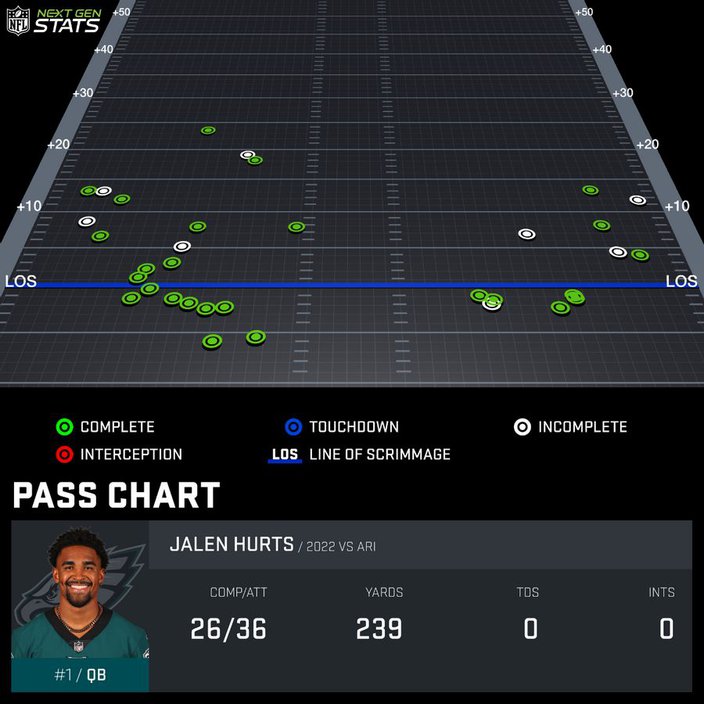 Martindale employed a blitz-heavy approach against another elite running quarterback in Lamar Jackson earlier this season, and was successful into forcing him into some bad decisions, most notably this one after a bad snap:

Nick Sirianni and Shane Steichen cannot let Martindale dictate the flow of the game. They need to trust that they have an MVP-level quarterback who has been an outstanding decision maker all season long. The Eagles have a stellar, veteran offensive line capable of picking up blitzes, and when they do, there should be major matchup advantages in the secondary... 👇

5) The Eagles' wide receivers vs. the Giants' secondary

The Eagles made a concerted effort to attack a young group of Titans corners last Sunday. A.J. Brown and DeVonta Smith responded by combining for 13 catches for 221 yards and 3 TDs. The Giants have played decent pass defense this year, allowing just 6.6 yards per pass attempt. But they are not well-equipped to stop Brown, Smith, and the rest of the Eagles' passing offense.

One last quick note: The Giants' best defensive player this season has been DT Dexter Lawrence (54 tackles, 6 sacks, 20 QB hits). He had to play 77 (!) snaps in an overtime game against the Commanders on Sunday, so he may not be very fresh this week.