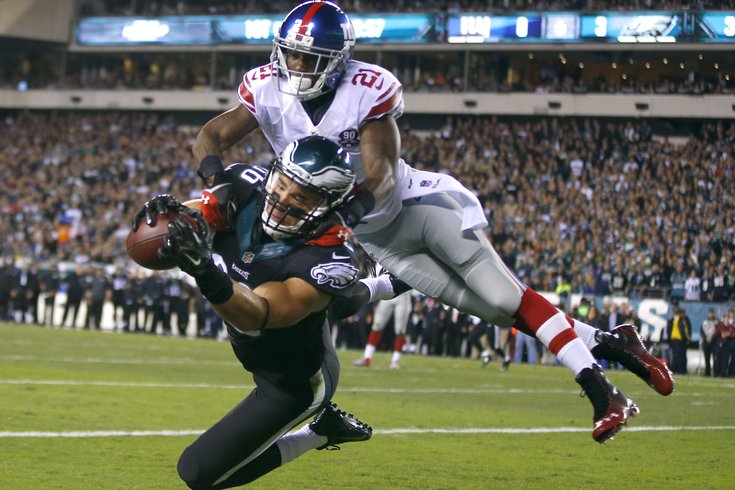 Zach Ertz hauls in a touchdown during last year's Week 6 matchup against the Giants.

The only two things separating Monday night's Eagles-Giants game from their Week 17 matchup are the date and the location. The stakes are just the same.

The Giants come in a game ahead of the Eagles in the NFC, and the outcome Monday will likely set the tone for the remainder of the Eagles season. Will they be fighting off the rest of the NFC East, or be left playing catchup as they enter the heart of the season?

When these two teams last met at the Linc a year ago -- it was also a Week 6 primetime game -- the Eagles wore the same black uniforms they'll don Monday night and shut out the Giants, 27-0. But by the time they met again in Week 17, both were out of the playoff picture.

That likely won't be the case this season. The NFC East, at least for now, is wide open, and there's a good chance we're looking back at this game in December when the playoff picture begins to come into focus.

Over at Bleeding Green Nation, six of the seven writers picked the Eagles to beat the Giants, the same as last last week's game against the Saints -- Brandon Lee Gowton is again the lone writer picking against the Birds.

As for the national writers, here's a look at how a few of them see the game playing out...

Is the Eagles' offense back, or was their stomping of a terrible Saints defense just a one-week aberration? Last season the Giants gave up 4.9 yards per carry, which was worst in the NFL. This year, they have a new defensive coordinator in Steve Spagnuolo, who is committed to stopping the run. Through five games, the Giants are allowing 3.5 yards per carry, which is tied for best in the NFL. However, because they're dedicating more players to the box, they've been exposed on the back end, as they have the worst pass defense in the league, allowing 304.2 passing yards per game.

The Giants will be without starting CB Prince Amukamara, which will further hurt their pass defense, and their linebackers are a bad matchup for Darren Sproles and Zach Ertz. I expect the Eagles to build on their offensive momentum of a week ago.

Another week, another game that the Birds desperately need to win. Such is life when you start 1-3 and 0-2 in the division. Although the Giants have been the best team in the NFC East up to this point, I was pretty underwhelmed with their performance at home last weekend against a woeful San Francisco 49ers team. On the winning drive, Eli Manning made some great throws… when he wasn’t making terrible throws that somehow weren’t intercepted.

I like the Eagles on Monday night. The Giants don’t have much of a pass rush, which means Sam Bradford should be able to generally pick up right around where he left off against New Orleans. On the other side of the ball, a banged up receiving corps hurts one the G-Men’s major advantages over Philly. If Odell Beckham Jr. can play at close to 100 percent, you just know he’s getting at least one big play against this secondary.

These two teams will play again Week 17 in East Rutherford. I have a suspicion that game will mean quite a bit, but in Week 6, the Eagles should get this one without having to sweat too much.

I think a lot of what happens on Monday night will come down to the status of Odell Beckham, Jr. The Eagles will likely be able to score against a Giants defense that has struggled to put together much of a pass rush and just lost cornerback Prince Amukamara for two-four weeks. Through their first five games, the Giants have just seven sacks (t-26th in NFL) and have allowed the most passing yards in the league. That should allow Sam Bradford plenty of time in the pocket, much like he had against the Saints. As for the run game, linebacker Jon Beason could be out with a concussion. [As you'll see, the health of the Giants in a common there here.]

That being said, the Eagles aren't much better in terms of passing yards allowed (26th) and have struggled against the only big-name receiver they've faced all year, Julio Jones. If Beckham is healthy, he could feast on the Eagles secondary, and unless Eli Manning completely implodes, that should lead to points for the Giants. And, yes, the Eagles have three new starters in their secondary, but did you see what he did in Week 17 last season (12 catches, 185 yards, TD)?

As for Manning, he's only posted a QB rating of 90 or higher twice in his 12 career games in Philly (including one postseason start). Without Beckham, Victor Cruz and, possibly, Ruben Randle, the Giants QB isn't going to have too many options. But if OBJ plays -- and is actually healthy -- he could be in line for a big game.

Still, I think the Eagles get their first division win of the season and move into a tie atop the NFC East.