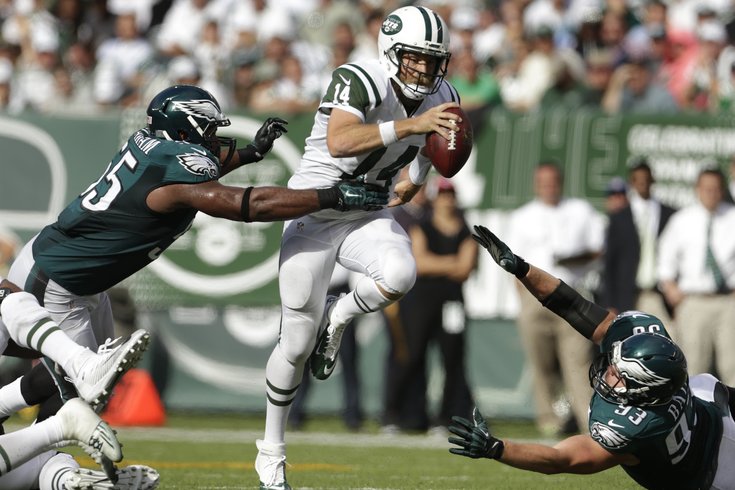 The Eagles' edge rushers have been forced to rush the passer with discipline against quarterbacks who get the ball out quickly.

So far this season, the trio of Barwin, Graham and Curry have had less than spectacular numbers:

So, what's up? A lot of it has had to do with the quarterbacks the Eagles have faced so far.

"There is more pressure than there are sacks," said defensive coordinator Bill Davis after the loss to Washington. "And again, when you face teams like we just did where the ball is out lightning quick, you always say, ‘Well the rush isn’t getting there.’ So how long is he holding [the ball]? On the ones that he's holding long, if we're not pressuring, then we are in trouble.

"One of the things that we tried to do both weeks, because the quarterbacks were similar, is the rush should be inside. And some of that, you talk about seeing more bull rushes and everybody says, ‘Everybody is going down the middle and they are not working the edges.’ Well, there is a reason. We are trying to make the quarterback throw from a ‘well,’ if you will, where he has to see over people and try to throw over hands. At times we did a real good job of that and at times we did not. But that’s when guys start really trying to free rush and say, ‘Hey, I've got to go get this sack.’ Then all of a sudden you're a little too wide and then the lanes open up.  So you've really got to pick your poison if you're going to go all out edge rushing or go down the middle."

"Fitzpatrick had the shortest drop, a 6‑yard launch point, and we also knew he got the ball out of his hands quicker than anybody in the NFL over the beginning of the season. So we were going to rush different than you would rush a deeper dropper," said Davis.

So how have the Eagles attacked?

"You stay in their face," said Graham. "You don't run past the quarterback. You want to stay in his face. That's what we tried to do with Drew Brees because of his size. He's 6'0, so you know, if you stay in his face, put your hands up, you have to throw the ball up a little higher than what he's usually doing. Most of the time when you see on film, you see a lot guys could just bat the ball down if they just put their hands up. So with him, we were just trying to make sure we kept him contained in the pocket... Same thing with Fitzpatrick, too, but we know he can run, so we really had to make sure we stayed on the outside."

And as a result, the interior defensive linemen have being putting up numbers instead.

"Other guys are stepping up and making plays, which is obviously great to see," said Barwin. "Bennie Logan had a sack. Obviously we saw what Fletcher Cox did. Marcus Smith had a pressure, guys had other pressures. I got there a couple times. I'd like to be getting there, but we'll see what happens."

Because of the pressure the Eagles have gotten, without getting sacks, they have often forced quarterbacks into bad throws. For example, opposing quarterbacks have combined for just an 85.7 QB rating against the Eagles so far this season, which is ninth in the NFL. They have also picked off six passes, which is sixth in the NFL. While the sack numbers are down, the overall efficiency of the defense has been far better than it was a year ago. Credit an improved secondary, but part of that is also because of the disciplined way the pass rushers have attacked the quarterback.

"One of the things, and I say this over and over again, sacks and interceptions are attached, and it's the quarterback's choice," said Davis. "We are pressuring the quarterback and he either chooses to eat it and take the sack or he gets rid of it."

"Our interception numbers are up from last year, but our sack numbers are down," said Curry. "You have to rob Peter to pay Paul, or vice versa."

If you're looking for Barwin, Curry or Graham to have breakout games against the Giants this Monday night, it probably isn't going to happen.

"You know where (Eli) is ranked in the NFL in getting the ball out of his hands? Third," said Davis. "So once again, it's a high-efficiency, quick ball-out-of-the-quarterback's-hand offense. And again, they have only had, I think, four sacks maybe and two interceptions, so Eli not only makes a quick read and gets it out of his hands, if there is any pressure, he throws it away. He's not taking the sack and he's not throwing the interception. He would rather take the intentional grounding and just eat the incomplete and play another down, and I think that's why their offense is pretty efficient."

Barwin, Curry and Graham are all very talented pass rushers, so the sacks will come. Just not yet.