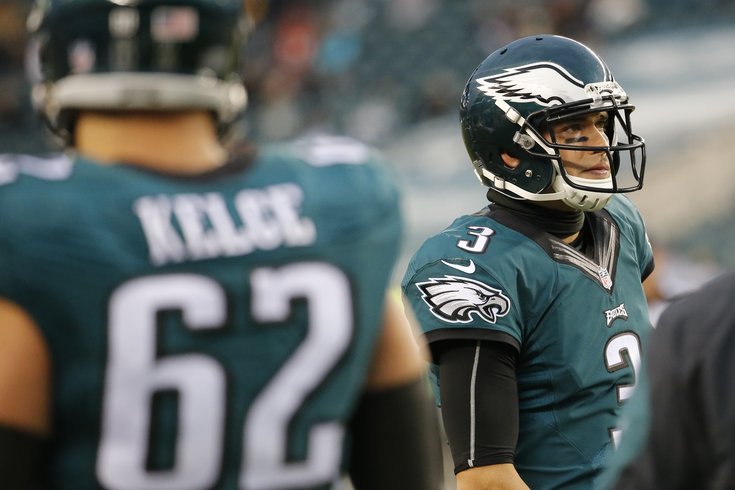 Philadelphia Eagles' Mark Sanchez walks the sidelines during their 45-17 loss to the Bucs.

The last time these two teams met, it was one of the most memorable games in recent Eagles history.

This time around, the stage may be a little bigger -- national television on Thanksgiving Day -- and less snow-covered, but both teams are now on the outside of the playoff race looking in. And in terms of what's actually at stake, well, that may be simply pride at this point.

The Eagles have lost three of their last four games, and after this game in Detroit, they'll have to play a pair of first-place teams -- at New England and at home against Arizona. A loss on Thursday, and Chip Kelly's team could easily find itself with a 4-9 record when they host the Bills on December 13.

To put it nicely, that is not where Eagles fans saw this team being back when the season began.

Here's what you need to know about Sunday's matchup at the Linc.

For the first time this season, more of the guys over at Bleeding Green Nation are picking against the Eagles than are picking them to win. And over at the Philadelphia Inquirer, both Jeff McLane and Zach Berman think the Lions beat the Eagles on Thanksgiving.

As for the national outlets, here's how they see the Eagles' Week 9 matchup playing out...

•    So far, only a few of the ESPN.com analysts' picks are in, but the early returns are strongly in favor of the Lions.

•    Four of the seven CBSSports.com writers who have made their picks already like the Lions on Thursday.

•    And if you want to go by the numbers, Nate Silver and the FiveThiryEight crew think the Eagles should be a half point underdog and them a 48 percent chance of winning.

A year ago, the Eagles walked all over the Cowboys on Thanksgiving, and then proceeded to squander their lead in the NFC East the rest of the way.

This year the implosion began earlier, as the Eagles have piled up two of the worst losses of the last 15 years the last two weeks at home against the Dolphins and Buccaneers. Maybe it will be good for the Birds to get away from Philly.

Or maybe they just can't throw, catch, block, tackle, cover, or coach. The Eagles opened as 1.5-point favorites in this game. I'm not sure how they could be favored over anybody right now.

I have a feeling that the Birds will come off last weekend’s stinker of a performance with a much better effort. In some ways, the short week could help the Eagles because the Tampa Bay loss can’t linger for too long. Plus, Lane Johnson doesn’t have to worry about whether The Linc is a home-field advantage or not!

It says here that Calvin Johnson, who has at least 80 yards in his last five games, will be the difference late in the fourth quarter. Yes, Byron Maxwell and Chip Kelly will be the main topics of conversation at Thanksgiving tables across the Delaware Valley.

A lot of what happens for the Eagles Thursday, at least offensively, will depend on the health of a few key players -- namely Sam Bradford, Ryan Mathews and Zach Ertz. Bradford, who has cleared the concussion protocol and practiced fully on Wednesday, has the best chance of playing against Detroit. The short week will likely mean the Eagles will be without Mathews (concussion, groin) and Ertz (concussion). And there's a chance they could be without center Jason Kelce, who missed Tuesday and Wednesday's practice with a knee injury. Despite his struggles recently, I don't think you want a full game of Julian Vandervelde at center.

As for the Lions, they don't score a ton of points (18.5/game), but then again, neither did the Bucs before they came into Philly and hung 45 points on the Eagles defense, nearly twice what they had been allowing per game coming in. Detroit's talented receiving combo of Calvin Johnson and Golden Tate have combined for just four touchdowns all season. Last year, they combined for 12 TDs. Still, I wouldn't count either of them out, as the Eagles defense has struggled against top receivers, especially tall ones like Julio Jones, Mike Evans and Vincent Jackson.

This will be the third in a stretch of games in which many believed the Eagles needed to go 3-0 in order solidify their place atop a weak NFC East. Instead, they could finish it 0-3 and be tied with Dallas for last place in the division come Week 13.

When do pitchers and catchers report?