Question from Angelo: What would it take to trade for Nick Foles, and would he make sense as the Eagles' backup?

Basically, it would be $5 million cheaper to trade him than cut him.

The acquiring team would have Foles on their cap at $4 million in 2021, all of which is guaranteed. They would also have to take a $1 million hit next offseason if they wanted to dump him. So basically, figure that Foles would essentially cost $5 million for one year.

As such, the Bears should be expected to trade a draft pick along with Foles just to get rid of him. If I'm the Eagles, I would be looking for a fifth- or sixth-round pick (ideally in 2022, since the Eagles already have an overabundance of late-round picks in 2021) to take Foles off their hands.

So, no, I don't think he makes much sense as the Eagles' backup, unless they're getting something along with him.

Question from Cesar: With the Eagles not signing any free agent QBs, how much more likely is it that they draft a QB at 6? I don't see any veteran QBs worth signing at this point, and this draft class is strong. Of course, this is all assuming the Eagles don't get Deshaun Watson.

To begin, yes, you can go ahead and assume the Eagles won't land Deshaun Watson. That's a pipe dream to begin with, and then when you factor in Watson's legal issues, he's unlikely to go anywhere until that situation is resolved.

Watson aside, it's highly likely that the Eagles will sign somebody. The only question is, will that be a higher end backup like Marcus Mariota, for example, or will they just go the super-cheap route with a guy like Nate Sudfeld or Joe Flacco, knowing they aren't going to be Super Bowl contenders in 2021 anyway. Personally, I would go the latter route.

And sure, if the Eagles sign a cheap backup (or none at all), then yes, that probably increases the odds that they select a quarterback at sixth overall, though I don't think that signing a more expensive one would negate that possibility. If you'll recall, the Eagles already had Sam Bradford on an expensive contract, and then they signed Chase Daniel to another expensive contract, and then they traded up for Carson Wentz.

Question from Ross: Who is your predicted starter at QB for week 1 as of now?

Hurts. Even if they draft a quarterback at sixth overall, it would likely be Justin Fields and Trey Lance, both of whom could use some time before they're thrown to the wolves, so to speak. Hurts is very likely to get at least one year to show what he can do, regardless of what the Eagles do in the draft.

Question from Fartz: They need to find a few cornerbacks somewhere, correct?

Yes, I believe that is their next order of business in free agency, along with backup quarterback. As I'm sure you've seen, they will reportedly be having Adoree' Jackson in on a visit Monday night, if he doesn't sign with Giants earlier in the day.

If they aren't able to land Jackson, the feeling here is that they'll move onto the next corner.

Question from GoBirds: What’s the latest word with Derek Barnett? Haven’t heard anything recently about him.

Barnett's fifth-year option of $10,051,000 is now fully guaranteed. The Eagles can still trade him, but releasing him is no longer an option, as they would be paying him either way.

The Eagles would have liked to have gotten a reasonable contract extension done with Barnett prior to the start of the 2021 league year, which would have helped them get under the cap. Barnett's representation was certainly aware of the Eagles' cap situation, and likely tried to flex any leverage they had, knowing that Barnett's $10,051,000 cap number in 2021 wasn't ideal for the team. The guess here is that they shot high on the asking price for a contract extension, and would have been fine with exploring the open market if the Eagles released him.

By keeping Barnett at a little over $10 million, Barnett will take up 5.5 percent of the Eagles' salary cap in 2021, however, by getting under the cap without touching Barnett's contract at all, Barnett's representation can no longer leverage the Eagles' need to get under the cap.

Question from DB: Is a Dallas Goedert extension the No. 1 priority after free agency settles down?

I don't think so, no. If the Eagles can get a team-friendly deal done with Goedert, then they would do one, but they can always rely on the franchise tag if not. Here are the 2022 projected franchise tag numbers, via OverTheCap: 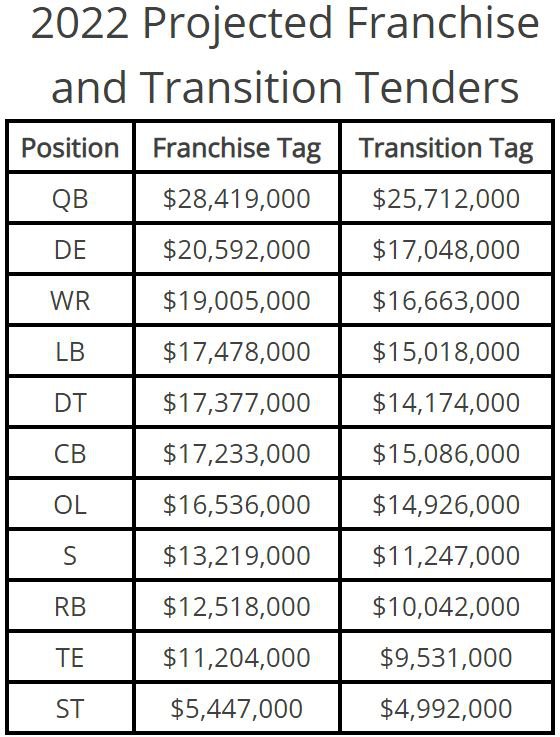 As you can see, kickers aside, tight end is the cheapest position. The Eagles shouldn't be in any rush to get a new done deal with Goedert unless it really favors them.

Question from Dan: Thoughts on hidden gems (potential impact players) on the Eagles' roster? I vote for Hakeem Butler.

I will respectfully disagree with you on Butler, though I will say I'm interested in seeing what he can do in training camp. I'll go with something of a surprise pick here in Marcus Epps. He has ability, and I thought he started to figure things out a bit last season. To be clear though, I do not think he will be an "impact player," as you put it.

Question from abcd: Wouldn't a team who trades for Zach Ertz be likely beneficiaries of a good comp pick if Ertz has a decent year and chooses not to re-sign with that team? (Similar to the Golden Tate situation.)

I think we're currently seeing what the market is for Ertz, and it's not strong. If you're a regular reader here, you already know that if I were some other team in need of a TE, I wouldn't trade anything to the Eagles for Ertz, as I wouldn't want his $8.25 million salary, even if I didn't have to give up a pick to get him. I believe that is the main reason why he hasn't already been dealt.

Beyond the unattractive salary, Ertz is 30 years old, he just had his worst season as a pro, he now has a pretty extensive injury history. Even if he has something of a bounce-back season, it's not as if he's going to be catching 100+ balls again like he did in 2018, and he's going to be yet another year older and likely further banged up. I don't see his market improving to the point where he'd earn a team, say, a fourth-round comp pick, for example.

Question from Pragmatic: If the Eagles' OL is healthy... could they actually be a decent team?

An OL of Mailata-Seumalo-Kelce-Brooks-Johnson would be one of the best in the league if they can stay healthy, which of course is a huge, if not unrealistic "if."

But yes, line play is kind of a big deal. If they can get good line play all year, they can compete for the division, which of course isn't a high bar for achievement.

Question from Danny Rose: Let's say Lurie produces a film about future Carson Wentz and you sir are tasked with casting an actor to portray late-career Carson. Whom do you cast?

Damian Lewis, from Homeland. He sort of looks like an older version of Wentz, and he was able to pull off a role that required him to appear physically fit. He was able to simultaneously act tough, while also playing the role of the self-perceived victim of tyranny.