Eagles mailbag: Who are the gameday backups at each spot along the offensive line? 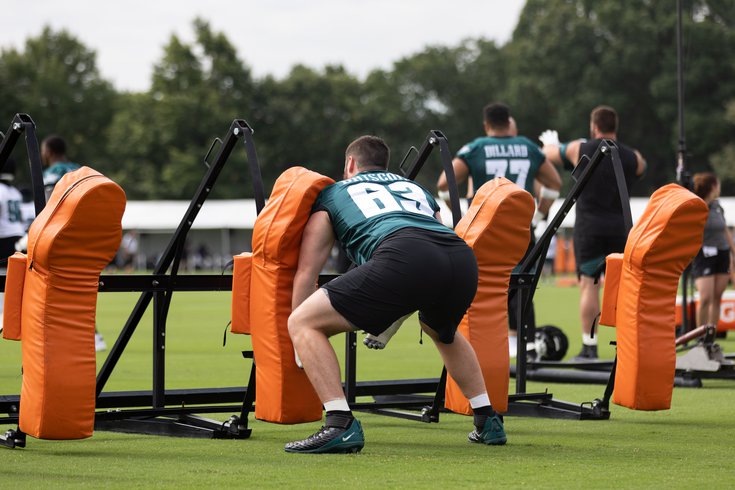 In our Eagles chat on Tuesday, there were some questions that we could not get to in time or other questions we did answer but could use more color. And so, let's do a mailbag post to answer some of the overflow, as well as some commonly asked questions on Twitter and via email. It'll just be a quick one today.

Question from MilkDuds: Who are the backups at each OL spot?

The tricky one is LT, which would normally be Andre Dillard, who is on injured reserve with a broken forearm.

Jeff Stoutland was asked a few questions on Thursday that were designed to coax insight into who the backup LT would be if Jordan Mailata went down. One possibility that perhaps existed was Lane Johnson moving over from RT to LT, with Jack Driscoll filling in at RT, since Driscoll has mostly gotten reps on the right side throughout his career. Stoutland shot that down to some degree, explaining that Johnson's muscle memory at this stage of his career could leave him vulnerable to inside rushes if he played on the left side.

It sounds more like Driscoll would fill in at left tackle. Stoutland is tough to transcribe because he's all over the place sometimes, but here's an edited version of what he said:

"Jack played on the left side during training camp. It’s time for Jack to start being like Isaac used to be back in the day when he played… I mean Isaac I think in one game played five positions… I think Jack’s at the point where he can be that kind of player. If you’re not a starter in this league… when you can create value for yourself and the organization by being able to play multiple positions if you’re not a starter, we have to make sure we have Plan A, Plan B, Plan C, and we’re ready to go."

So with Dillard out, a visual of the gameday OL depth chart:

And then my guess is that undrafted rookie Josh Sills will be inactive on gameday for now.

Question from Kephas: A bunch of national writers have the Eagles in the Super Bowl?? Seems like national media suddenly has a lot rosier picture of the Eagles than we do locally. Does that seem accurate?

I can't speak to what the national folks have actually said about the Eagles specifically, but I think that one of the factors here is that the NFC is awful. We saw on Thursday night that the reigning conference champs have a lot of problems, starting with the offensive line, and maybe the quarterback's elbow.

Meanwhile, the Buccaneers and Packers have significant issues of their own, and the Cowboys have lost a lot of good players.

The Eagles have the fewest holes in the conference. It's just that their biggest concern is at the most important position.

Question from G: If you throw out the Cowboys game where most of the starters didn’t play, Quez Watkins didn’t have a TD catch last year. Any cause for concern or do you think that’s part of the reason Pascal was brought in for red zone purposes?

I think Pascal is a player who makes a lot of sense in the J.J. Arcega-Whiteside role of a season ago. He'll do a lot of the dirty work as a blocker in the regular offense and on special teams, but obviously he'll play a lot more than J.J. and he'll actually get targets in the passing game. And yes, I do think that he is a player better suited for red zone work than Watkins, and I imagine he'll get more snaps than Quez down there. But I don't think the Eagles looked at Quez and thought, "We need to get this guy off the field." They like Quez, and he'll still have an important role in the offense.

Question from Norm Snead: Please provide your explanations for each 2022 win and loss.

Norm is referring to this post, in case you're unfamiliar. I'm not going to explain each game here, but I will touch on the Vikings game, which seemed to get the much blowback.

The Eagles can certainly win that game, and they should, at home. But we all know that they're going to lose a game or two to a less talented team, and this is the one that I identified as a possible bad matchup. With a pair of great route runners in Justin Jefferson and Adam Thielen and a quarterback in Kirk Cousins who for all his faults completes a high percentage of passes, the Vikings' offense feels like it could be trouble for what Jonathan Gannon's scheme was in 2021, if he that's what he rolls out again in 2022.

Question from Justin: Who are the top 5 trash talkers on the team?

Chauncey Gardner-Johnson is one of the biggest trash talkers in the NFL, as is Brandon Graham. So they're probably No. 1 and No. 2. I'll put CJGJ over BG on that front, since BG has never gotten anyone to wind up and throw a punch at him, whereas that seems to happen quite a bit with CJGJ.

Landon Dickerson is probably No. 3 on my list. He seems to like to emphatically celebrate either big blocks or neutral zone infractions. And then K'Von Wallace is probably No. 4. That's all I got. I'll keep an eye out for No. 5 as we head into the season, and maybe we'll circle back.

Question from Kephas: Who would you suggest are the Eagles' most hated current rival players? I'd think Zeke is still a top candidate, even he's fallen off some. I can't think of someone currently on the level of, say, Jeremy Shockey or Terrell Owens in Dallas. Wentz is probably on there, although sort of a different situation.

Yeah, that's a good question. Zeke and that stupid eating thing can be irritating, but as you noted, he's not really that good anymore, which makes him a less compelling villain. The Cowboys have a bunch of good players, like Dak Prescott, Trevon Diggs, Micah Parsons, etc., but none of those guys have embraced that type of instigator role.

That's certainly not what Wentz is, as you note. He's disliked locally because he packed up and forced his way out of Philly at the first real sign of adversity, but he's never going to provide bulletin board material with his words.

I kinda feel like we need a good intra-division villain, and he probably has to come from Dallas because anyone who tries to be that while playing for bad teams like the Giants or Commanders will just come off as clownish.