What will the Eagles' offensive identity be in 2022? 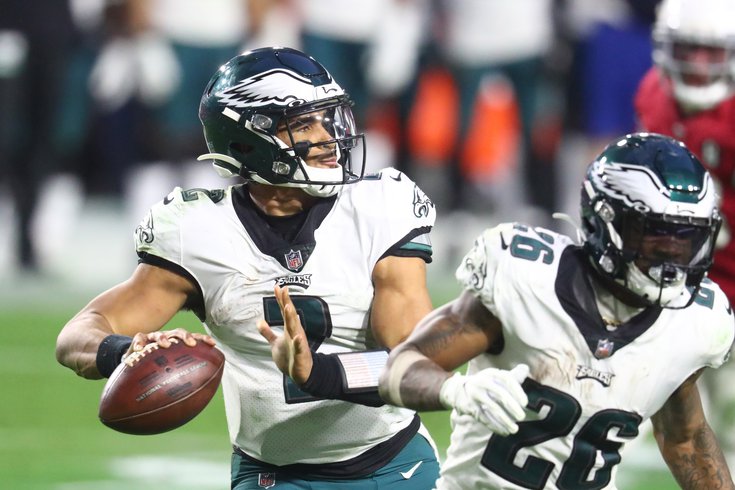 Going into the Eagles' Halloween matchup with the Lions in 2021, the team was 2-5, rudderless offensively and an afterthought in the larger NFL playoff picture. That game flipped their fortunes, as the Birds crushed Detroit in a 44-6 rout before pulling out a nine-win season and a playoff berth.

The Eagles' offense was transformed dramatically, going from a heavy pass-first team that's been an organizational hallmark for two decades to a complete throwback: a squad that's going to run the ball down a defense's throat. The Eagles pulverized the Lions with 236 yards and four touchdowns on the ground. That became the defining trait of the Eagles for the rest of the 2021 season, as the team rushed for 2,715 yards. That broke a franchise record set by the 1949 NFL champion Eagles (2,607 yards).

That Lions game changed everything.

When speaking with reporters at the NovaCare Complex earlier this week about the Eagles' Week 1 matchup in Detroit against the Lions, Jalen Hurts brushed away trying to compare last year's easy win with what's coming on Sunday.

"We're a different team. Last year is last year," Hurts said. "We have an opportunity to recreate the identity of what the Eagles want to be with this team. It's not about anything in the past or anything in the future. It's about right now and that's what I preach all the time. It's just staying in the moment and taking it day by day. We want to attack the week."

While Hurts wasn't attempting to make a statement about the Eagles' overarching offensive philosophy with his "identity" comment, I was left wondering what exactly this team's identity will be like in 2022.

Things shifted from an Andy Reid-inspired air it out attack to something that more closely resembled a barnstorming 1920s team in October of last year.

I went deep into the numbers of how the Eagles' offensive looked with Hurts as the quarterback before the seismic shift and after, seeing how their run-pass ratio differed over time and what that could mean for this season.

To get a view of what Hurts looked like as a pro quarterback before head coach Nick Sirianni and offensive coordinator Shane Steichen came to town, here is how the Eagles' offense operated in the three full games Hurts started and played in 2020:

Over that entire stretch over the course of 212 offensive players, the Eagles ran the ball just 36.8 percent of the time with Doug Pederson making the calls for Hurts.

Fast forward to the beginning of the 2021 season.

The Eagles organization clearly wanted to continue to be a pass-first (and second and third...) team when Sirianni took over. The Eagles threw the ball at a pretty similar rate over the course of the first six weeks of the season compared to the stretch at the end of 2020.

Out of 353 offensive plays, the Birds ran the ball just 37.4 percent over those first six games.

By Week 7's loss to the Raiders in Las Vegas, something different was brewing, especially as Steichen took over play-calling duties for Sirianni during this period. Here's how the rest of the 2021 campaign looked. I removed the Eagles' Week 13 win over the Jets and Week 18 loss to the Cowboys since Hurts played in neither of those games (the team had a bye in Week 14).

Over those nine games, the Eagles ran the ball 56.9 percent of the time across 603 offensive plays.

How much did the Eagles run the ball in Hurts' 15 starts? 49.7 percent because of how much they were throwing to start the season.

So... what does this mean for Sunday and the rest of the Eagles' games this season?

I'd imagine that given the addition of star wideout A.J. Brown and the way Hurts has looked improved as a passer in training camp, they're not going to be that pre-World War II offense again. That's not what the franchise wants to be and that's not what they ultimately want to see from Hurts.

There can, of course, be some noise in the numbers. Generally around the league, teams rack up more rushing yards in wins. No, that's not some full-steam "RUN THE BALL!" energy, but simply because when teams get up early (usually by throwing the ball...) they then run it to burn out the clock. During their 2021 second half, I would say that Eagles team was an exception, a team that took leads because of Hurts' mobility and the overall rushing attack (with an elite offensive line).

I'd wager that the 2022 Eagles come out like the 2021 version did, attempting to throw the ball all over the field and trying to win it that way. The Eagles' ground game is clearly at the top of the league, allowing the Eagles to perhaps build early leads following touchdowns from the likes of Brown and DeVonta Smith before putting things on ice with Hurts and Miles Sanders. If the Eagles don't like the strides they're seeing from Hurts as a passer then, well, get ready to strap your leather helmet on and turn back the clock again.

The Eagles' best path to true Super Bowl contention is Hurts continuously improving as an NFL passer. If that doesn't totally come to fruition in 2022, well, falling back on a historic rushing attack isn't the worst thing in the world.