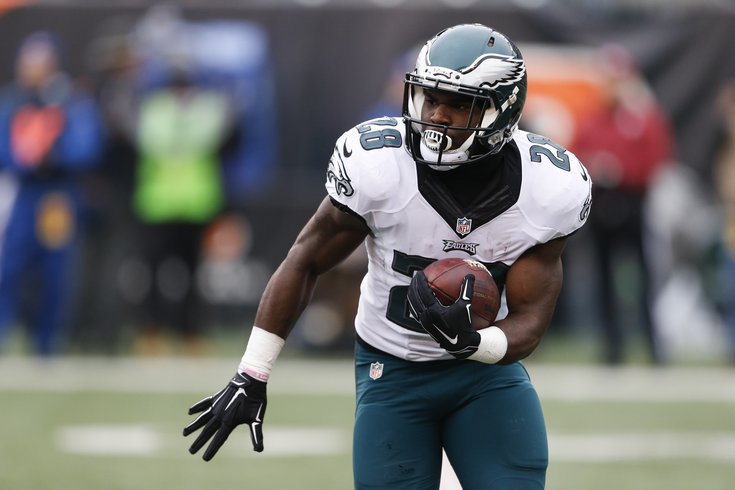 Eagles rookie running back Wendell Smallwood's season is over.

The Philadelphia Eagles' loss to the Washington Redskins Sunday afternoon didn't just put them at 5-8, and 5,000,000-to-1 shots to make the playoffs. The Birds also sustained a number of injuries, as three players will head to the injured reserve list.

Let's take a look at the five roster moves the Eagles made last night.

We covered this in greater detail on Monday, as Doug Pederson announced that Dorenbos' season was over during his press conference with reporters Monday afternoon.

Smallwood had his ups and downs as a rookie this season with the Eagles. His best moments came in the Eagles' blowout win over the Pittsburgh Steelers when he ran 17 times for 79 yards and a touchdown. His worst moment came in the Eagles' loss at Dallas, when Smallwood inexcusably fumbled with a 10-point lead, leading to a Cowboys field goal.

On the season, Smallwood rushed 77 times for 312 yards (4.1 YPC) and 1 TD. He caught 6 passes for 55 yards and no scores. Smallwood showed enough this season for the Eagles to feel confident that they have a contributor in the backfield going forward, but not so much that Smallwood showed that he can be trusted as a three-down back at this stage in his career. The Eagles will almost certainly work extensively on Smallwood's pass protection next offseason.

Tobin was beaten badly by Redskins edge rusher Ryan Kerrigan on Kerrigan's game-sealing sack-fumble Sunday afternoon, and with good reason. On the play before, Tobin sprained his MCL, and could barely move. He is signed through the 2017 season.

Gratz (5'11, 199) was a former third-round pick (64th overall) of the Jacksonville Jaguars in 2013. In his fourth year with the Jags this season, he was released and claimed off of waivers by the Los Angeles Rams. The Rams released him a month later.

Gratz is a semi-local guy from Piscataway, N.J. He went to UConn, where he started his final three seasons. In those three seasons, he had 167 tackles, 8 INTs, 3 forced fumbles, 24 pass breakups, and 10 tackles for loss.

Gratz signed a two-year deal, so this was a move made by the Eagles with the idea in mind that he'll compete for a roster spot in training camp next season.

In training camp, Marshall showed good hands for a running back, but has has some work to do in pass protection. With Smallwood on injured reserve and Darren Sproles in the concussion protocol, the Eagles needed another body at running back, however, it is likely that Kenjon Barner will be the player who receives an added workload when Ryan Mathews needs a breather.

Lovato will, of course, be Dorenbos' replacement over the final three games. Whether he can do magic tricks is to be determined.