A DeSean Jackson return to the Eagles makes too much sense 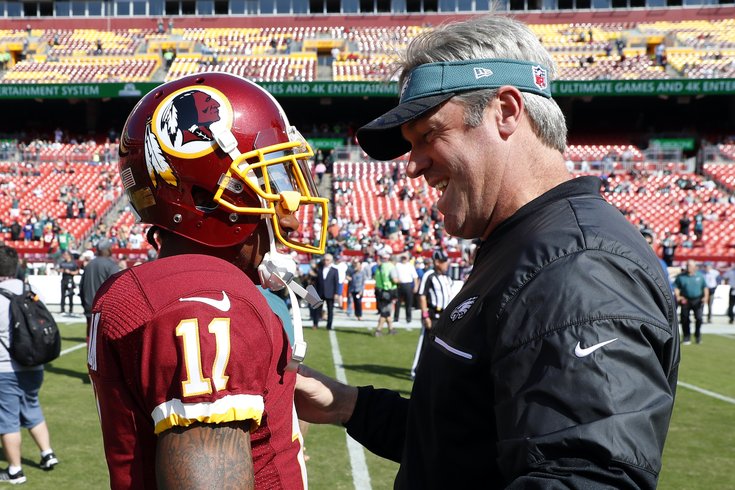 "DeSean... Bro... Our fans are screaming for some undrafted guy named Paul Turner to play. Help us. Please."

MORE ON THE EAGLES: Hit on Sproles not necessarily a 'cheap shot' – and that's the problem | Handing out 10 awards from the Eagles-Redskins game | The effort was there for Eagles, but the result remains the same DeSean Jackson, to security guard who asked if he’s coming back to Philly: ‘We’ll see’ | Instant observations: Redskins 27, Eagles 22

The Eagles were fourth in the NFL in total points that season, 30.3 percent of which came on drives in which Jackson had a reception of 20+ yards. Here is a chart of all of Jackson's big plays that season, and the result of the drive:

By comparison, in 2016, Eagles wide receivers have combined for a grand total of 22 receptions of 20+ yards, with three games to play.

In 2013, the Eagles set a new NFL record with 80 pass plays of 20+ yards. Their big play production since Jackson was released has predictably gone down ever since:

While part of that decline was certainly due to opposing defenses adapting to Kelly's fast-paced offense, the absence of Jackson unquestionably limited the Eagles' big play capabilities.

In 2016, the Eagles' receivers have been woeful making plays down the field, as they are on pace for just 43 pass plays of 20+ yards, or barely half of the Eagles' total in Jackson's last season in Philly.

In Sunday's loss to Jackson's team of the last three years, the Washington Redskins, Jackson burned the Eagles for an 80-yard touchdown reception. That was Jackson's 22nd career 60+ yard reception of his career, which is now second all-time behind only Jerry Rice, according to Brian McNally of 106.7 the Fan in Washington D.C.:

Back in October, Jackson indicated that he was open to a return to Philadelphia when he hit free agency this offseason. Rumors intensified a week ago when Adam Schefter of ESPN reported that the Eagles are likely to pursue Jackson in free agency this offseason. A few days later, Tim McManus of ESPN reported that Jackson would be 'intrigued' by a return to Philly.

After the game on Sunday, Jackson was asked if Eagles fans were trying to lure him back to Philly during the game. “I don’t know man, shoot," Jackson responded. "We’ll see what happens, you never know how it’ll play out.”

The Eagles desperately need a player who can make big plays down the field, and one of the greatest big-play players in NFL history seems willing to do that for them once again. So maybe that should happen.