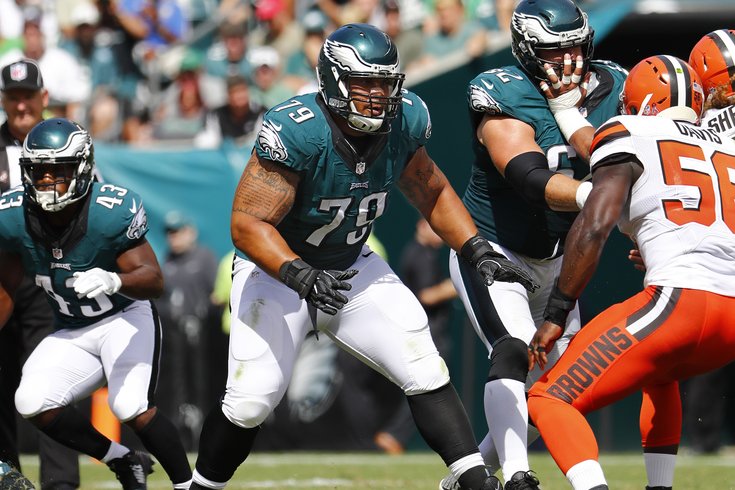 The Eagles offensive line has been in disarray since Week 6, when starting right tackle Lane Johnson's 10-game PED suspension began, forcing rookie Halapoulivaati Vaitai into extended action without any prior NFL experience. That's when things got really complicated.

When Vaitai went down with a knee injury in Seattle, starting left guard Allen Barbre was moved over to right tackle to fill in for the rookie. Veteran Stefen Wisniewski was plugged into Barbre's spot, and the Eagles were able to scrape by with their patchwork line.

Somehow, this was in spite of the fact that a pair of former Pro Bowlers, left tackle Jason Peters and center Jason Kelce, have been having arguably the worst seasons of their careers.

But now twice in the last three weeks, the Eagles have been forced to play without veteran right guard Brandon Brooks, one of the team's key free agent acquisitions during the offseason. Both times, his absence was unexpected and came without warning, leaving the offensive line looking something like this:

Brooks isn't injured. He's sick. And no one really seems to know – or at least willing to say – what's wrong with the 27-year-old lineman.

Immediately following Sunday's 27-22 loss to the Redskins, head coach Doug Pederson was asked about the mysterious stomach illness that's now manifested twice in the last 21 days, both of which happened to be days the Eagles were playing. Given that Brooks was such a late scratch – he was actually at Lincoln Financial Field on Sunday morning preparing as if he was going to play – it was understandable for the first-year coach to not yet have an answer as to why.

On Monday, he was asked again. And the answer didn't really change.

"We have not yet [received any additional information]," Pederson said when asked about Brooks. "That's something we're going to continue to explore today with him and just see. It's obviously unfortunate, but we need to get to the bottom of it and just find out why.  "

Prior to the team's Week 12 loss to the Packers, Brooks was taken to the hospital with a stomach illness that, much like on Sunday, came on suddenly and without warning.

It's worth noting that Brooks has been sidelined before by stomach ulcers, and has now missed games in each of the past three seasons because of stomach problems.

"There is a little bit of history there," Pederson added. "But it's something our medical team will do more to investigate this thing as we go."

Whether or not this is a recurrence of the ulcers for which he was previously hospitalized remains uncertain.

At this point, not even Brooks knows the cause of his stomach pains according to Pederson, who said the two spoke on Monday morning.

"You know, [Brooks] definitely wants to explore the reasons why," he said of their conversation. "If we can help him, I want to help him and make sure it doesn't happen again.  "

With the current state of the Eagles offensive line, it's bad enough not having him active on game day, but it's made worse by the fact that Brooks is taking the first team reps all week instead of rookie Isaac Seumalo, who has been starting in place of Brooks and could use as many as he can get.

Seumalo's been getting some reps, as they rotate the linemen throughout practice, but not as many as he would if the coaches knew he would be their starter on Sunday.

"It can be a challenge," Pederson said of these last-minute roster changes. "I think for us, as coaches and as a staff, by giving Isaac [Seumalo] these reps during the week, it definitely prepares us for anything. It's obviously no different than if [Brooks] were to go down with an injury, say, in the first quarter and [Seumalo’s] got to go play.

"It is a difficult situation, but at the same time, we feel comfortable with Isaac and giving him the time during the week to be ready and handle the situation. "

That Carson Wentz has been hit more and more with each passing week is not the fault of Brooks alone -- that has much more to do with the entire offensive line shakeup, the genesis of which can be traced to Johnson's failed drug test and ensuing suspension.

But it does seem a little strange that his stomach condition only seems to appear when the Eagles are set to play a game. It's now happened twice in 13 games -- several more if you go back to his time with the Texans -- and as far as Pederson knows, it's never happened on a non-game day since he's been in Philadelphia.

That begs the question: Could it be mental?

"That I don't know," Pederson said. "That's something that our medical team will dive into and try to find out.  "

Given that Brooks had drastically changed his diet following a previous bout with ulcers, yet they continued to come back, perhaps there is some credence to that.

Whatever it is -- and hopefully it's nothing too serious -- Brooks is expected to return to practice on Wednesday and remains penciled in as the team's starting right guard moving forward, assuming he's healthy.

When they travel to Baltimore to face the Ravens this weekend, the Eagles could be without Vaitai, who continues to recover from an MCL sprain, as well as backup lineman Matt Tobin, who suffered a similar MCL injury on the final play against the Redskins. That doesn't even include Barbre, who is likely to play but may not be 100 percent after straining his hamstring on Sunday.

With all that chaos, the Eagles could be forced to make some personnel changes to that unit between now and then.

"Well, we're looking at all that today," Pederson said. "We still have Dillon Gordon. But there's going to be probably an opportunity to work out some guys and bring some guys in and try to fill those spots, obviously just like we would with Jon in the situation.

"The next couple days will be big days for us. "