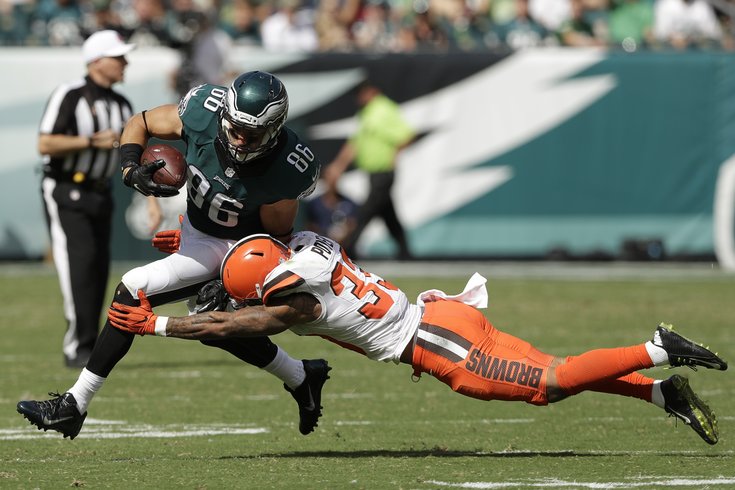 Before the season 2016 began, we pointed out that Zach Ertz was one of just 20 tight ends in NFL history to accumulate over 2,000 receiving yards in his first three seasons in the pros. As a reminder, here is the list of tight ends to achieve that mark:

Each year since his rookie season, Ertz has been a popular player to have a "breakout season," and yet, despite the impressive numbers noted above, it does not really feel like that has quite happened just yet.

Ertz's start to the 2016 season has been slow. He missed two games with a dislocated rib near his shoulder, however, in the five games he has played, he has just 15 catches for 150 yards and no touchdowns. That would be an average of three catches for 30 yards per game.

While Ertz's basic stats are falling short of expectations, they are not as alarming as what he does after he makes the catch. On Ertz's 15 receptions, he is averaging a paltry 2.3 yards after the catch, which is 40th in the NFL out of 41 tight ends with at least 10 receptions.

But even more alarming than Ertz's yards after catch average is the actual film behind it. After taking a look at all of Ertz's 15 receptions, he does not yet have a single broken tackle this season. Worse, he has gone to the ground ON HIS OWN five times.

• Here Ertz goes down on his own in front of two defensive backs. This was his third-longest gain after the catch on the season. (Seriously).

• This one is somewhat understandable, as Ertz catches the ball on a comeback route, and gets the first down rather than trying to avoid the defender and potentially losing yardage.

• He has no such excuse on this one, however, as he simply belly-flops at the sight of the linebacker:

• Here, again, he simply goes to the ground on his own in between two defensive backs:

• And finally, yet again, Ertz makes it easy on a defensive back as he's already on his way down before contact gets there:

Compare that with another Eagles tight end Brent Celek, who has played in 156 games in his career, and has missed just one. On this one catch and run against the Steelers, Celek had more broken tackles and roughly half the yards after the catch that Ertz has had all season.

Poor tackling has become an epidemic in the NFL in recent years. It's bad enough if you're a smaller guy making it easy on defenders. It's simply not acceptable when you're a 6'5, 250-pound tight end.

Nor should it be.