Doug Pederson cost the Eagles a victory in Dallas 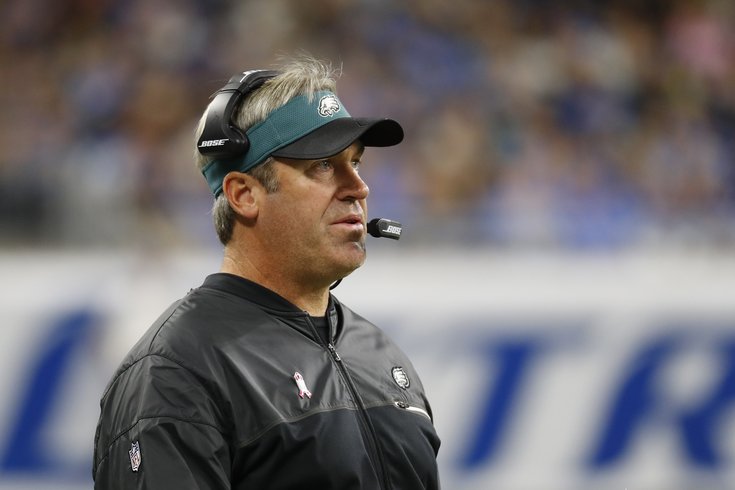 Doug Pederson is a rookie head coach in the NFL, a fact that has never been more apparent than during his meltdown in the second half of the Eagles’ infuriating 29-23 overtime loss to the Dallas Cowboys on Sunday night.

There’s no benevolent way to say this.

The coach blew the game.

If the chain of ridiculous decisions he made had happened earlier in the season, no one would have been surprised. After all, Pederson was supposed to be a clone of one of the worst late-game managers in Eagles history, Andy Reid. But Pederson had already shown that he was different – until he suddenly reverted to Reid’s brainless form.

How illogical was Pederson’s coaching in Dallas? There were at least half a dozen plays that invited failure, plays that defied conventional football logic. Afterward, he had an excuse for every misstep, but all of them pointed in the same grim direction. Pederson squandered the biggest win of his coaching career.

For example, the coach talked himself out of a 53-yard field goal attempt that would have secured the game with 6:34 to play, even though kicker Caleb Sturgis had booted two 55-yarders with room to spare just before the half. Pederson later said he was worried about field position, ahead by only a touchdown at the time.

In fact, the only reason that kick was so challenging was because Pederson had just called an illogical swing pass to Darren Sproles that led to a six-yard loss, while a simple run up the middle would have kept the Birds in prime field-goal range. He blamed a breakdown on blocking for the botching of that play.

Then there was the bomb launched not by franchise quarterback Carson Wentz late in the game, but by Josh Huff, a wide receiver who had never thrown a pass in his three-year NFL career. The coach said he saw a chance to exploit a coverage flaw in the Dallas secondary.

And so it went. Why throw a key third-down pass late in the game to little-used tight end Trey Burton? Why not? Why get suckered by a fake punt? Hey, stuff happens. Why use a cold Wendell Smallwood for a carry in the fourth quarter – resulting in a key fumble – when Sproles was operating so effectively? It seemed like a good idea at the time.

For every question, the coach had an answer – and none of them was satisfying to a city in mourning after a devastating loss to the most despised opponent on the schedule. This was the kind of defeat that does not fade from memory quickly. This was the kind of failure that stains a coach’s reputation.

What made the loss even more galling was that it wiped out a brilliant effort by Wentz (32 for 43) in his first Dallas game, strong defensive work until the final minutes and overtime, a herculean performance by the 33-year-old Sproles and a rise-to-the-occasion showing by a young and eager Eagles team.

Instead of being tied for the NFC East lead at 5-2, the Birds are two games back now, with a tough schedule ahead. They were so very close to being genuine contenders, and now they are exactly what we originally thought, a young team in search of an identity.

Doug Pederson may still become an excellent NFL coach someday, but after Sunday’s debacle, it’s going to be a while before anybody really believes that again.

After attending my first Sixers game since 2011, I am the bearer of both good and bad news. The good news is that Joel Embiid can really play. He’s almost worth the price of admission. The bad news is, the rest of the team – at least right now – is unwatchable.

With a great opportunity to encourage attendance at future games, the Sixers were so putrid against Atlanta that they did the opposite. I would not pay a nickel to see the product the team put out there in a 104-72 loss on Saturday afternoon. Even with Embiid, they looked like the 10-72 team they were last season, if not worse.

Based on the first couple of games, Dario Saric was not worth the wait, Jahlil Okafor has regressed, and the rest of these frauds belong in the D-League, or maybe even Europe. OK, I’ll exclude new point guard Sergio Rodriguez from that list. On a better team, he could be a solid bench player. But the rest, ugh.

And then there’s Embiid, whose initiation to the NBA has been much more encouraging than anyone could have expected. He’s averaging almost a point a minute so far, and he is a force inside defensively, clogging the middle and swatting away shots with abandon.

Equally compelling is his court presence. When he’s out there, it’s impossible not to focus only on him, seven feet and two inches of athleticism framed in a constant smile. After two years of foot surgeries, he exudes joy merely at his ability to play again. There is every reason to believe that he will be a star if he stays healthy.

Of course, that’s the one overriding concern. He plays so aggressively, it borders on recklessness. It’s fun to watch, but every time he peels himself off the court after a collision with an opponent, you can’t help but hold your breath. Those two years definitely did not teach Embiid how to preserve his body.

In Saturday’s game, Embiid played only 15 minutes. The other 33 minutes were an exercise in sheer boredom, for the team and the fans. Given the strict playing-time constraints on the big center, it’s going to stay that way until Ben Simmons arrives sometime early next year.

You won’t be seeing me back at a Sixers game until Simmons gets onto the court – and some of these terrible NBA players get the hell out of town.

The Cubs and Indians have waited a combined 176 years to win a World Series, so obviously they have no problem forcing fans to wait – and wait – during one excruciating game after another. This Fall Classic has the best storyline in decades ... and the absolute worst pace.

So far, the five games have taken: 3:37, 4:04, 3:33, 3:16 and 3:27. In this instant-gratification, smartphone-obsessed world, spending three or four hours watching a sports event is implausible for a casual fan and damaging to the sport. My greatest love in sports is baseball, and I haven’t watched every pitch of a game in years.

Please understand, I am an authority on long games, having endured all eight hours and 25 minutes of the longest contest ever played, on April 18-19 and June 23, 1981, in Pawtucket, R.I. That game encompassed 33 innings. It averaged four innings per hour. This World Series has an hour passing every two and a half innings.

Baseball wasn’t always an endurance test for fans. Games generally wrapped up in two hours and change, and almost never more than three. But then TV commercials slowed everything down, followed by the incessant tics and twitches of players, and then by replay delays and endless pitching changes.

Commissioner Rob Manfred has made it a priority to cut down the time of games, suggesting that he may even try to limit the number of relievers per inning or enforce the 20-second time limit between pitches. He understands the problem, or so it seems.

And yet, he has not yet even addressed the 8 p.m. start times in the East, despite a forced change to 7 p.m. last week because of weather resulting in big TV ratings. Many working fans in the most densely-populated part of the country either can’t or won’t brave a near-midnight finish to find out who won.

Much has been made of the coinciding journeys of the Cubs and Indians, one of whom will end, respectively, either 108 or 68 years of futility with a on-field celebration like few America has ever witnessed. Unfortunately, much of our country won’t actually see it.

If the 2016 World Series has proved anything, it’s that baseball games are too long – even when the story is engrossing.

• During his defamation suit against Penn State – which won him a $7.3-million judgment last week – Mike McQueary revealed that he had become a pariah in Happy Valley for exposing Jerry Sandusky as a child abuser and Joe Paterno as an enabler. The good news for a hero like McQueary is, now he has the money to escape that community of lost and delusional people.

• Dave Hakstol is starting to get on my nerves. The second-year Flyers coach has a laid-back style that seems to be funneling into the psyche of his players. Not only have they started slowly in almost every game, but they also have been a major disappointment so far defensively. The Flyers have always led the NHL in emotion, but not under Hakstol. The coach needs to know right now that Philadelphia is not a patient sports city.

• Howie Roseman has received some of the best press of his career in the last few months, but let’s not forget what he was ready to do four years ago when he was looking for a coach to replace Andy Reid. The second choice of the Eagles GM was Gus Bradley, who has been a complete bust in Jacksonville, with a 14-41 record. Of course, we all know who Roseman’s first choice was. Chip Kelly was a disaster, too.

• The Sixers did the right thing by telling Sevyn Streeter that she couldn’t sing the national anthem on opening night with the words “We Matter” on her shirt. Then they did the wrong thing by apologizing. The anthem is not a forum for political commentary. Streeter has her music for that, and Twitter, and Instagram, etc. It’s just a shame the Sixers didn’t have the courage to stand up for what they knew was right.

• Dr. Richard Harkaway is a prominent Philadelphia urologist who used those surgical hands for an entirely different purpose at the Sixers’ opening game last week. He gave Oklahoma City’s Russell Westbrook the finger – with both hands, no less – after the star guard allegedly called the doctor fat. Dr. Harkaway later apologized for his indiscretion. Hey, I’m just glad I wasn’t on his operating table the next morning.