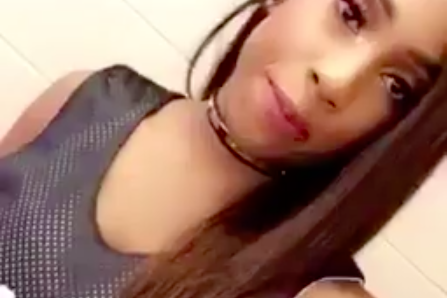 R&B and soul singer Sevyn was scheduled to perform the national anthem at the Sixers season opener on Oct. 26, 2016.

An R&B singer scheduled to perform the national anthem at the Philadelphia 76ers season opener on Wednesday night says her appearance was canceled because of the "We Matter" jersey she wore to the game.

Amber Denise Streeter, an artist who goes by the stage name Sevyn, posted the following video message on Twitter after the Sixers started their game against the Oklahoma City Thunder at the Wells Fargo Center.

Was suppose to sing the anthem at @sixers & @okcthunder game but mins b4 @sixers said I couldn't because I was wearing a "We Matter" jersey pic.twitter.com/wjoJN3rq0r

In place of Streeter, one of the Sixers' dance team members sang the national anthem prior to the opening whistle.

Sevyn had been scheduled to sing the anthem with a halftime performance from hip-hop artist Desiigner, Liberty Ballers reported earlier this month.

A promotional tweet posted earlier Wednesday by Streeter advertised an opportunity for fans to join her courtside in the third quarter.

Philly #Streetteam who's coming to the @Sixers game tonight? If you are come sit with me courtside! #sixers #MadeInPHILA
See details below! pic.twitter.com/A8bQaiJmxX

The alleged incident comes less than a week after the national anthem singer a preseason Sixers-Heat game knelt during her performance in Miami. It also forms part of a controversial protest movement against racial injustice in the United States.

The NBA has a rule calling for players and coaches to stand during the national anthem, but it's unclear whether the league's rules explicitly or implicitly apply to performers.

Attempts to reach Streeter were not immediately returned.