In Eagles' loss to Cowboys, blame begins with Doug Pederson 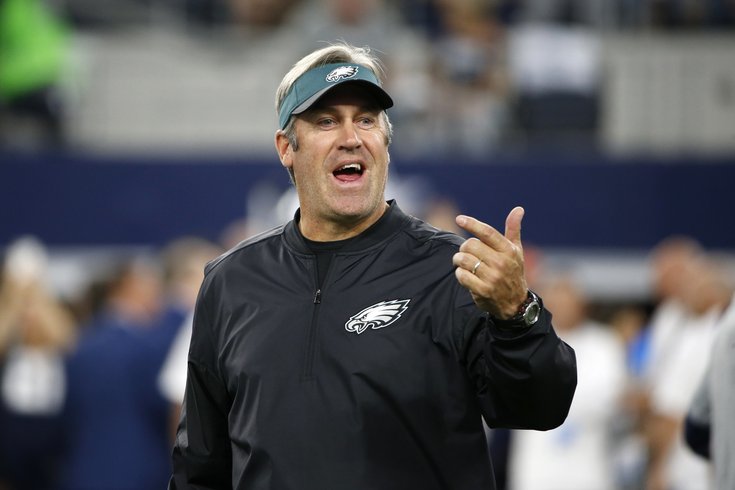 Philadelphia Eagles head coach Doug Pederson did not have his best game on Sunday night.

Against the Dallas Cowboys on Sunday night, the Philadelphia Eagles lost a game they should’ve won. That’s not up for debate. They had a two-possession lead in the fourth quarter. They again turned the ball over late and squandered not one, but two opportunities to add to the lead. And they did this all while going away from the things that had made them successful and given them that late lead.

Ultimately, however, the Eagles lost their shot to take over first place in the NFC East and fell to 0-2 in the division (4-3 overall) in overtime, 29-23, to the Cowboys.

This is not going to be pleasant. There were a lot of different things that went wrong, so for sake of keeping this at a reasonable length, let’s stick to one area in which the Eagles came up short in Dallas.

But before we do, a few disclaimers:

1. Doug Pederson is hardly the only reason for the loss. A few other examples include…

2. This is not an indictment of Doug Pederson’s overall job performance. That’s a much more in-depth story that shouldn’t be written until the end of the season, at least. [NOTE: Please try to remember that he is a rookie head coach. That’s not an excuse, just a possible explanation — also, it’s a fact.]

3. Not every decision Doug Pederson made was a bad one. But not every poor one he made will be listed here. Just the most egregious.

Now that we’ve gotten that out of the way, there was one specific series that was especially damning for the rookie coach.

The Eagles were up seven points with about eight minutes left to go when Pederson decided to dial up a trick play on 1st and 10 from the Dallas 32 yard line. He called for Carson Wentz to throw a backward pass to Josh Huff, who then threw deep to a covered Jordan Matthews.

So many things could have gone wrong on this play it’s almost impossible to comprehend why they would call this play here, especially since it was the only deep ball they threw the entire game.

First, the Eagles were already in field goal range — which would’ve made it a two-score game — and all they needed were positive yards and to run some time off the clock. The last thing you want to do is turn the ball over. A backward pass to an Eagles wide receiver is the second quickest ways to create a fumble; the first is handing the ball off to a running back not named Darren Sproles in the fourth quarter.

Second, why the hell is Huff throwing the ball and not, you know, the guy you drafted No. 2 overall? At this point, you’re just begging for the ball to be intercepted. Thankfully, it wasn't

Take a second to catch your breath, because that’s just first down.

On second down, they handed the ball off to Kenjon Barner for two yards. Not the most exciting play call in the world, but after that last one, it was exactly what the ol’ ticker needed.

Then came third down. The single most confusing — and damning — decision of the night, although I guess you could argue the next play was worse. Oh, yeah. It gets worse.

Since the Eagles had already tried to turn the ball over once on this series and failed, it was time to move on to the only other thing they couldn’t do. They went backward. Six yards. On a screen pass to Sproles that never stood a chance.

“The third-and-eight play was designed to get Sproles the ball out in space and the linebacker [Sean Lee] actually made a play on it,” Pederson said. “It was actually designed for that look, for that coverage. Give them credit.”

Perhaps Lee did make a great play. But on first watch, it looked more like Jason Kelce, who was limping quite a bit earlier in the game, didn’t get over quick enough to make the block. Either way, the result was the same and the Eagles were looking at a 54-yard field goal attempt to put them back up two scores and essentially erase the field goal the Cowboys had just added following Wendell Smallwood’s fumble on the previous possession.

But then, another staggering decision.

Pederson opted to punt instead of trying the field goal, despite the fact that Caleb Sturgis had already hit from 55 yards out. Technically, he did it twice if you count the one he made as Jason Garrett tried to ice him. You can call it “having faith in the defense,” but it certainly looked the same as playing scared.

But by all means, throw it backwards and then punt instead kicking the 54-yard FG... pic.twitter.com/UMVRNxeiW8

Here’s how Pederson explained the decision:

“The thing is, field position at that time is critical,” he said. “[Sturgis] did kick that one before half, which was an excellent kick with no time left on the clock. Had we executed on the third-down play, we would have been in a little better position to kick the field goal at that time and we just didn’t execute the play before.”

But that’s the problem. That third down play was designed to go backward before it went forward. Even a run up the middle for no gain or an incomplete pass is a better result. The execution wasn’t the problem. The play call was — as was the ensuing decision not to kick the field goal and try to give your team some breathing room.

As bad as that was, it wouldn’t be the last time Pederson left us scratching our heads. It would, however, be the last time the Eagles had a lead. The Cowboys marched down the field and tied the game up at 23-23 when Dak Prescott found Dez Bryant in the end zone with three minutes left to play.

But after exchanging three-and-outs for a few drives, the Cowboys had the ball with about 40 seconds left and about 35-40 yards between them and a shot at a game-winning field goal. Following an incompletion on first down, Connor Barwin sacked Prescott with about 30 seconds left. The Cowboys were facing 3rd and 20 from their own 18, and even though he had all three of his timeouts left and one of the most dangerous punt returners in the league, Pederson opted to simply let the time expire.

“I felt at that time, because our defense was playing extremely well, I had made up my mind at that time to go ahead and get us into overtime,” he explained. “Hopefully you win the coin toss, take the ball and be in a position to score. And/or put our defense out there who had just come off a great drive and they were fired up, to put them back on the field. So it was just my decision to do that.”

You mean the defense you didn’t trust a few drives earlier when you punted in order to give them better field position to start the drive? The one that then allowed the Cowboys to march down the field and get a game-tying touchdown? The same defense that, although it played well much of the night, was completely gassed after spending nearly the entire fourth quarter on the field? That defense?

Had the Eagles won the toss in overtime and gone on to win, we likely wouldn’t be talking a whole lot about the decision to let the clock expire instead of trying to force Dallas to punt.

We would, however, still be talking about that inexplicable series midway through the fourth quarter. Not even a win would have washed that one away. And that’s when you know it’s bad.

Hopefully, decision-making like that is nothing more than growing pains for a guy who was coaching his seventh NFL game. It’s unfortunate that it cost the Eagles the game — and a Cowboys game at that — but it’s hardly representative of what we’ve seen from Pederson to this point.

If it carries over into next week, then we might really have a problem.