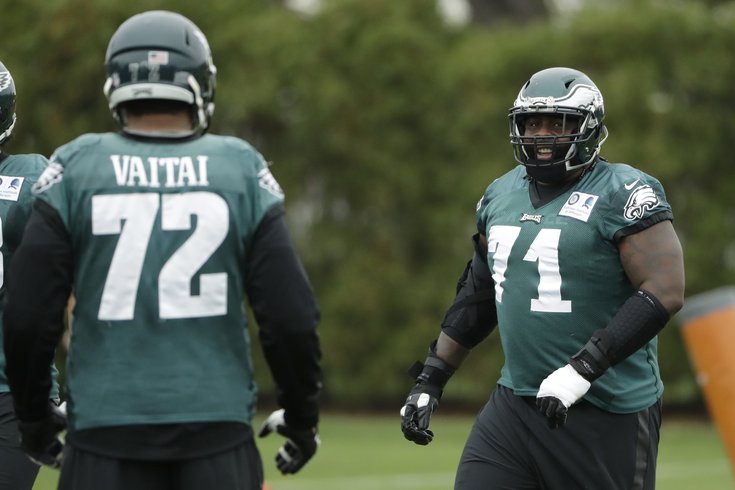 The Eagles will have to find a long-term answer at RT after Lane Johnson takes over for Jason Peters at LT. Can that be Halapoulivaati Vaitai?

Yes, the Philadelphia Eagles' 2016 season is still in full swing, and at 4-3 they are legitimate playoff contenders. Still, it's never too early to peek ahead to the offseason, and take a look at the positions the Eagles are going to look to try to fix and/or upgrade.

Jason Peters will turn 35 in January, and this could be his last season in the NFL. Whenever Peters decides to call it a career, Lane Johnson will take over at left tackle. Johnson, of course, would face a minimum two-year suspension with a third failed test for performance-enhancing drugs, which has to remain in the back of the minds of the Eagles' front office.

With Johnson currently serving his 10-game suspension, Halapoulivaati Vaitai has filled in at right tackle. Vaitai's first performance of the season against the Redskins was obviously bad. In his second game against the Vikings, Vaitai's name wasn't called often, which some perceived to be a good sign. After reviewing his game film, while improved, it was once again an unimpressive performance. Vaitai will have a chance to prove his NFL worthiness over the next seven games. On the initial eye test, however, the sentiment here is that the Eagles should strive to significantly upgrade there. In my view, Vaitai is not quite ready, and I don't see a high ceiling if and when he does develop into a legitimate NFL starter.

First and foremost, the Eagles must protect Carson Wentz. Just as importantly, they need a pair of offensive tackles who can handle the edges on their own without any help. This is a dumbed-down statement, but when you're giving help to one of your offensive linemen on nearly every play, you're playing 10 on 11 football in the passing game. Having a good pair of tackles opens up the playbook and what the Eagles can do offensively. A pair of quality bookends will make every player on the offense look better.

Duh. During the Chip Kelly era, the Eagles spent a lot of draft capital on the wide receiver position.

• Matthews is clearly the Eagles' best weapon in their passing offense, however, his hands remain inconsistent as he has been plagued by drops. He is not a player who can stretch the field, and is probably limited in what he can do without a complementary receiver who can.

• Huff has developed into a very good special teams player, both in the return game and in kick/punt coverage. However, he's not really a wide receiver, as the Eagles rarely target him down the field when he's running a traditional route tree. Most of his involvement in the offense is on quick throws to the flat on run-pass option plays. Huff will remain a part of the team's plans going forward because of the great special teams player he has become, but he probably should not be considered anything more than a fourth or fifth receiver in the regular offense.

• As for Agholor, it is difficult to pinpoint one thing he excels at as a receiver after a year and a half in the NFL.

And finally, there's Dorial Green-Beckham, who has everything you want in terms of height-weight-speed, but it's hard to see the dog in him, as in, he's not exactly Steve Smith (the good one) from a "want" perspective.

Ideally, the Eagles could really use a player who can take the top off the defense. Failing that, anyone who can just catch the ball would suffice.

The Eagles' current cornerbacks aren't bad. They have a pair of No. 2 type of corners, who are competent, but not special. What they don't have is a corner who can take on star receivers, like Dez Bryant or Odell Beckham Jr.

Throughout the Chip Kelly era, Connor Barwin was one of the most valuable members on the defense because of his versatility. Barwin can cover, rush the passer, and play the run, but is not a dominant player when doing any of those things.

In Jim Schwartz's scheme, Barwin is being asked to beat left tackles mano-e-mano, which is not his strength. Schwartz needs his front four to be able to generate pressure on their own, without the benefit of blitzing, and Barwin has simply been invisible far too often during long stretches of games.

Meanwhile, it would appear that the team views Vinny Curry as a pass rush specialist, but not a three-down player.

If the Eagles traded or released Barwin next offseason, they would save $7,750,000. The Eagles love Barwin as a person and member of the community, but it is simply unjustifiable to keep him at his cap number next season for the production he is providing. It also does not help Barwin's cause that he just turned 30.

Brandon Graham has proven to be a star player so far this season, but the Eagles could use another three-down rusher on the other side.

* I'll also note here that defensive tackle skyrockets up this list if the Eagles cannot find a way to re-sign Bennie Logan.

The 2017 NFL Draft is absolutely loaded with quality running backs. It's a pretty good bet that the Eagles won't be bringing Ryan Mathews back next year. They can save $4,000,000 if Mathews is traded or released.