Is Darren Sproles the Eagles' lead running back moving forward? 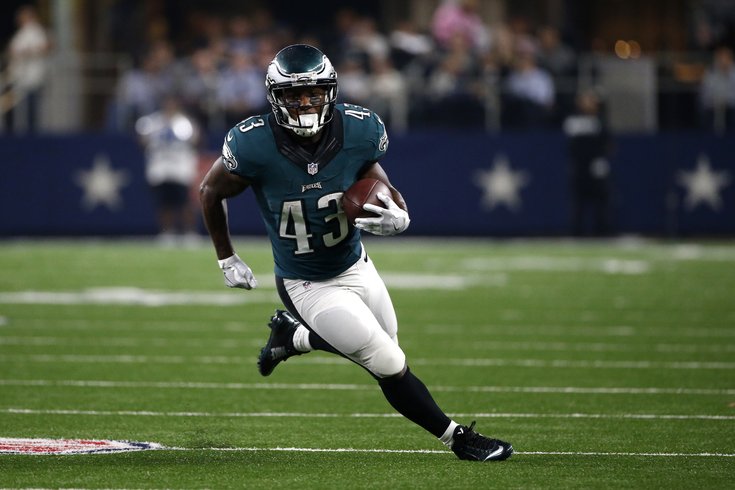 Philadelphia Eagles running back Darren Sproles had quite an impressive game for a 33-year-old running back.

In Sunday night’s loss to the Dallas Cowboys, one of the most surprising performances came from Philadelphia Eagles running back Darren Sproles, who carried the ball 15 times for 86 yards* and caught five passes on seven targets for 17 yards. In doing so, the 33-year-old running back passed former teammate LaDainian Tomlinson for the eighth-most all-purpose yards in NFL history.

The fact that the return specialist and longtime change-of-pace back passed Tomlinson was not the unexpected part of Sproles’ numbers against the Cowboys. The real surprise was the fact that he carried the ball 15 times, almost double the number of carries combined by the other three Eagles running backs and his most since last year's win over the Patriots (he also had 15 carries).

According to Doug Pederson, this was simply a case of if-it-ain't-broke-don't-fix-it. Sproles averaged 5.7 yards per carry in the loss and, at least until overtime, was out-performing the NFL's leading rusher and top candidate for rookie of the year, Ezekiel Elliott.

at the end of regulation

*Elliott finished the game with 22 carries for 96 yards.

But right from the start, before the rookie head coach even had time to take notice of how well Sproles was playing, it seemed like they were planning on calling his number quite a bit. Perhaps that was because in their win over the Vikings, starting running back Ryan Mathews lost yet another fourth-quarter fumble.

Following that game, Pederson hinted at the fact that Mathews could lose some of his carries of his carries to Sproles and Wendell Smallwood., the latest member of the ever-growing Eagles Fourth Quarter Fumble Club. Against the Cowboys, Sproles was the main beneficiary of those carries.

Fewer touches for Mathews shouldn’t have shocked anyone. But to get just four carries for 10 yards? That’s a totally different story.

"It wasn't a reaction [to Mathews' fumbles]," Pederson said at his Monday presser. "I just think that Darren had the hot hand yesterday. Darren was playing outstanding and he was doing some great things out there, so I just wanted to keep Darren in the game."

To dub Sproles the new lead back after just one game would be a rush to judgment, but when asked about that being the case going forward, Pederson didn't quite rule out the idea entirely.

"I can't say that 100 percent," Pederson said. "It's something we'll evaluate in these next couple of days and make that determination. But until then, it's still Ryan Mathews and then Darren in those situations, and we have to Wendell and Kenjon going too."

At this point in his career, Sproles can never be a traditional "feature back" -- actually, he likely never would have been able to do that for an extended period of time given his size. And that's actually been one of the things that's made him so durable and able to play at a consistently high level as he moves into his mid-30s. Most running backs are watching the game from their couch at that age.

He's only carried the ball more than 15 times twice in his career -- he hasn't done so since 2009 -- and his 20 offensive touches against Dallas matches the second most in a game since he came into the league in 2005. Furthermore, his value as a punt returner in undeniable, and it would be pretty painful to watch one of the Eagles' strengths be turned into a weakness simply because the other three running backs -- Mathews, Smallwood and Barner -- are unable to hold on to the football late in games.

"I definitely think he's capable [of handling that workload]," Pederson said. "But I don't think you want to give him any more than what he got yesterday, with his role on special teams and all that too. But he's -- I mean, if you know Darren like I know Darren -- the way he works during the week, the way he prepares himself and prepares his body and mind, he's definitely capable of handling that type of load."

For a game or two, sure. But no matter how well he prepares, unless the Eagles have the Fountain of Youth hiding somewhere at the NovaCare Complex, giving Sproles the ball 20 times week in and week out is just too much to ask. Then again, he seems like the only Eagles running back who can hold on to the ball in the fourth quarter.