"It's like what Celek taught me one time: 'Man, I went my first year and I didn't get back til my last year' when he retired," Graham recalled. "So I'm just trying to make sure I go out and finish the deal." 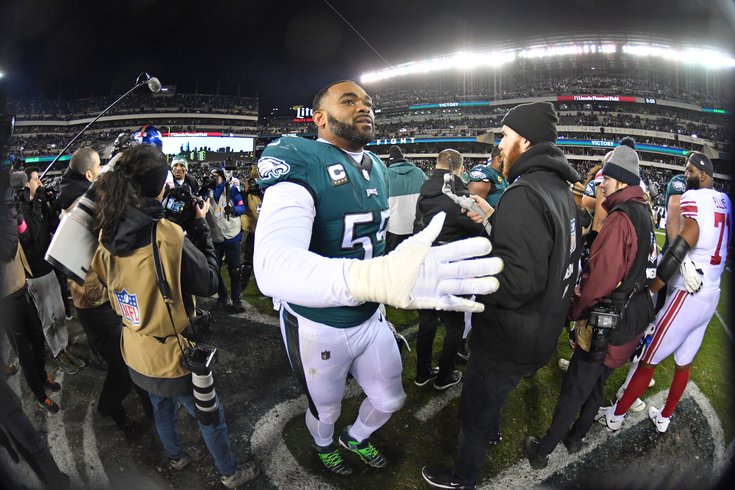 Brandon Graham is trying to stay in the moment.

Brandon Graham isn't worried about too much right now.

He isn't worried about the Comeback Player of the Year snub, the future of his playing career, or even the chance that Sunday afternoon could be his last home game as an Eagle.

The NFC Championship game and the San Francisco 49ers are all that's in front of him, and he's trying to keep the preparation, for himself and his teammates, business as usual.

But he recognizes, too, that the Eagles are once again on the cusp of doing something special, and that chances like this don't come around all that often.

He didn't have to look any further than former tight end and fan-favorite Brent Celek as an example.

"It's definitely a blessing just to be in this situation," the veteran defensive end said Wednesday down at the NovaCare Complex. "I'm just soaking it all up one day at a time.

"It's like what Celek taught me one time: 'Man, I went my first year and I didn't get back til my last year' when he retired. So I'm just trying to make sure I go out and finish the deal, and that's making sure we take care of this week so that we can get there [to the Super Bowl]. Then we'll handle that when it comes, but just excited for the opportunity."

The trajectory of the two's careers isn't exact, especially since both played on opposite sides of the ball, but as Graham's continues well into his 13th season, there are some increasingly striking similarities. 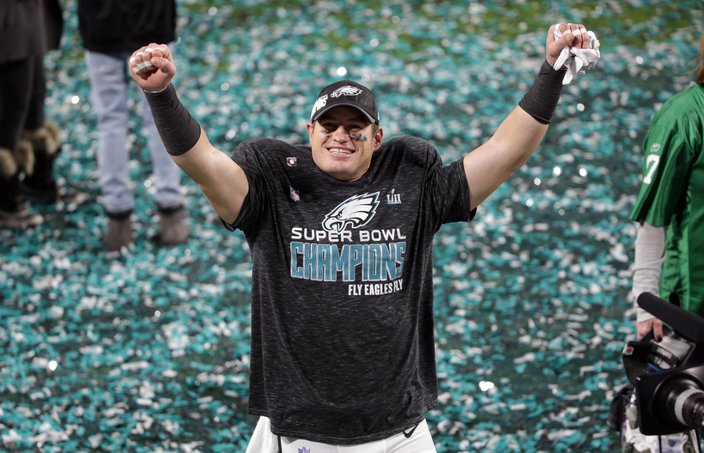 Celek, a fifth-round pick out of Cincinnati in the 2007 draft, wasn't really on anyone's radar until he started flashing some pass-catching prowess during the 2008 season. In what became the last hoorah for the Andy Reid-Donovan McNabb coaching-quarterback tandem, Celek became a steadily greater part of the offense as the Eagles made a late-season rally to the NFC Championship, where they lost to an Arizona team on their own Cinderella run.

So close so early into his career, he figured there would be another shot soon enough, but there are never any guarantees in the NFL, as he would come to learn. Celek remained a consistent and steady part of the Eagles' offense, but the Reid era was on its last legs and soon fell apart, Chip Kelly's tenure burnt out fast but did see Zach Ertz get drafted, and by the time Doug Pederson took over, he was on the wrong side of 30 and serving a reduced, more run and pass blocking oriented role.

But he always adjusted and did whatever the team asked of him, keeping him as one of the most respected players within the locker room and in the fanbase. He was an Eagle through and through, so when the team made it's miraculous run to the franchise's first-ever Super Bowl title in 2017, 10 years later, cathartic couldn't even begin to describe the feeling. But it would eventually become clear that that was the point to call it a career. 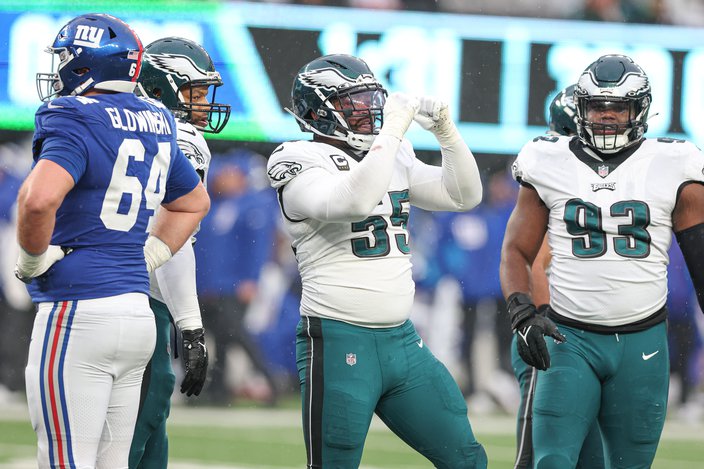 Eagles defensive end Brandon Graham celebrates during the team's 48-22 win over the Giants earlier this season.

Graham's run began with a different take on humble.

The Eagles' 13th overall pick in the 2010 draft, many considered his selection a reach, and he had to work for years to shed that label. But he remained steady and committed to the organization through all of it – a rough rookie year, an injury-shortened second one, Reid's firing, Kelly's flash in the pan, the meteoric rise and painful demise of Pederson's run – all while his infectious smile and relentlessly upbeat personality endeared him to the city.

During the 2017 run, Graham was a key piece and leader for the Eagles' defense and came up with arguably the biggest play in franchise history when he knocked the ball out of Tom Brady's hands in the Super Bowl to give the Eagles the ball back late.

When the clock finally struck zero and the celebration began, cathartic couldn't even begin to describe the feeling, but Graham's career continued on.

The Pederson-coached teams that followed were still successful, but never to that same degree. Pieces from that 2017 team steadily faded away until the remaining core of it all came crashing down in the 2020 season.

Pederson was gone after that, so was former franchise QB Carson Wentz and then Ertz soon after, making way for rookie head coach Nick Sirianni and a very green Jalen Hurts at quarterback.

Graham stayed, but he was getting older – same for franchise stalwarts Fletcher Cox, Jason Kelce, and Lane Johnson – and his future grew uncertain once he tore his Achilles in Week 2 of last season,  which left him sidelined for the team's surprise run to the playoffs.

When he came back in training camp this past summer, it was to a reduced role, just like Celek. The Eagles had made a huge edge-rush signing with Haason Reddick and Josh Sweat was steadily growing into his position.

But he adjusted and happily did whatever the team asked of him, and the results speak for themselves.

The Eagles, on the way to the NFL's top regular-season record at 14-3, assembled one of the best pass-rushing attacks in football, and though Graham played fewer snaps (474, the first time he's been below 500 since 2013), he still reached double-digit sacks for the first time in his career.

Somehow he bounced back beautifully from an injury not everyone fully recovers from, and at age 34, is still playing great football in a role he's fully embracing.

"Oh yeah, I feel good, man," Graham said. "I know I'm not the guy I was early on as far as – man, when I see certain plays back then I was looking a lot faster and I wasn't letting these quarterbacks beat me around the edge on these dang on zone reads. But I do feel I'm still pass rushing the same, I'm still able to dominate in the run game and just really just enjoying being a leader for the guys because coming off the bench I can see a lot to help Haas and Sweaty.

"We'll be talking about what we're seeing out there, so I try to be that shining light for those guys as far as trying to make sure they keep on elevating their game, and know what we see on the sidelines and what they're actually seeing on the field is matching up."

Now, with the Eagles back in the NFC Championship, he finds himself in a position no other Eagle has been in before: A shot at a second Super Bowl title.

And after everything that's happened in the surprisingly long five years since the first one, if they do it again, cathartic probably wouldn't even begin to describe the feeling.

But for right now, there's only the moment in front of Graham and the task at hand for the Eagles: That's San Francisco.

Still, enjoy the ride while you're at it. The rest can be figured out later.

"I'm just moreso trying to finish the deal with this season," Graham said. "Then we'll talk more as that goes.

"I'm just trying to stop time as much as I can by enjoying this moment right here, with us just sitting up here, because these moments come and go so fast. One minute I'm talking to y'all, the next minute I'm in [the locker room] getting ready for work, next minute the day is over, we're on to the next day and so, man, I'm just like 'Dang, boy, we're playing for the NFC Championship!'

"I've only played one time in it and you know what we did that year. So it's cool to be in this moment again, and I know that our team will put its best foot forward this week to give us a chance to go get this win."