A dominant 380-yard, three touchdown performance against Tennessee has Hurts with the weekly honor again. 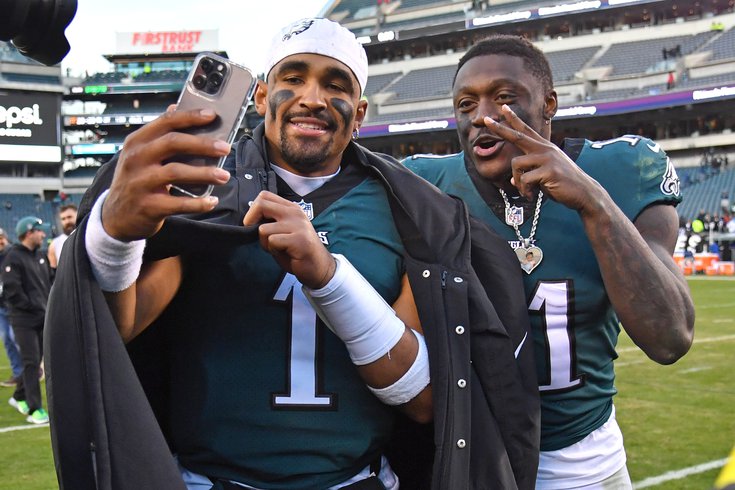 How many Player of the Week awards for Jalen, A.J.?

Jalen Hurts has been named the NFC's Offensive Player of the Week for the second straight week after a dominant 380-yard, three-touchdown performance from last Sunday's drubbing of the Tennessee Titans.

It was one of the Eagles' most complete efforts all season, and for Hurts and the offense specifically, they completely flipped the script from the run-heavy attack that beat the Packers a week prior to a total air raid on Tennessee.

Hurts connected with DeVonta Smith for a 34-yard touchdown pass on the game's opening drive then hit former Titan A.J. Brown on scoring bombs of 40 and then 29 yards in a blowout so thorough it may have been the straw that broke the camel's back on Tennessee GM Jon Robinson.

The Eagles as a whole, meanwhile, are 11-1, at the top of the NFC, and running with a quickly adaptable offense that can beat opponents any which way. It's a dangerous revelation for the rest of the league.

"I just think it's us just trying to go out there and do our jobs, individually, as a group," Hurts said after the Titans game. "Nothing good ever gets done if every man doesn't do their job and dominate their box. That's what we strive to do.

Hurts has definitely been doing all of the above so far this season. The second-year starter has 2,940 yards through the air, 690 on the ground, a 68.1% completion rate, and just three interceptions through 12 games, all with major strides made as a passer and "M-V-P" chants that only seem to grow louder with each passing week.

The NFL is clearly on notice too with the back-to-back weekly honors.

"That's the art to it, right?" head coach Nick Sirianni said of Hurts as his QB. "Be aggressive and create explosive plays while taking care of the football. That's why only so many people in this world can play the position that he plays."