Who won the week in Philly sports: Jalen Hurts is the NFL MVP 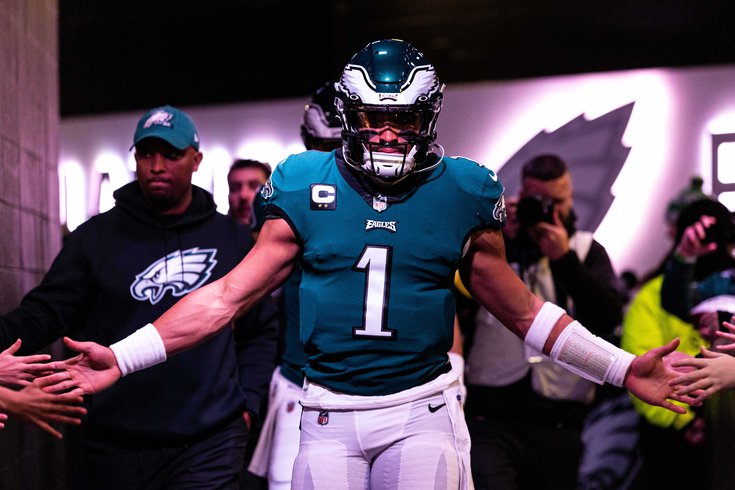 Eagles QB Jalen Hurts walks down the tunnel ahead of Sunday's game against the Titans.

For the second-straight game, Jalen Hurts not only won the week in Philly sports, but won the week in the entire NFL. Just as it seemed that Hurts might have been fading in the MVP race, Hurts turned in a historic rushing performance against the Packers in primetime before dismantling a tough, physical Titans team through the air in a blowout win. Rushing for 157 yards one day and then throwing for 380 the next. That just doesn't happen.

This comes as Patrick Mahomes and Kansas City fell to 9-3 after running into their kryptonite in the form of Joe Burrow and the Bengals. Mahomes is the better QB, but Hurts and the Eagles are owning the NFL this season.

If you were a Hurts skeptic over the last two years, I get your rationale, but doubting a player with his intangibles was a losing proposition for me. He's gotten better every single year of his football life since he stepped on the field at Tuscaloosa as a freshman in 2016 and won SEC Offensive Player of the Year.

The lessons of the Nick Foles-Carson Wentz dynamic played into my evaluations of Hurts. I felt like I was one of the few in the Eagles online media scene who was in favor of riding with him since he first took over for Wentz back in 2020.

Wentz was undeniably a more talented quarterback than Foles, but the manner in which the Eagles in 2017-2018 responded to Foles' presence, demeanor and leadership only becomes clearer and clearer since his departure from Philly. This isn't an excuse to take shots at Wentz, but just pointing out that Hurts' aura felt eerily similar to that of Foles from a personal perspective as No. 11 was burning out with the organization as the 2020 season wore on.

The Eagles' selection of Hurts was predicated on righting the wrongs of missing out on Russell Wilson in the 2020 NFL Draft, but it gradually morphed into wanting to replicate the energy of those Foles-led Eagles teams for me.

But, again, the passing stats were not in Hurts' favor over the first two years of his career. Here's how his numbers compare to the way he's crushing it now:

The guy who was completing 52 percent of his passes as a rookie is now slicing and dicing defenses with his arm.

The eye test backs all of that up as well.

Does Hurts attempt this pass in 2021?

What a catch by No. 11 👀#FlyEaglesFly pic.twitter.com/3Q17ZPVsg6

Something as simple as the quickly processed play with a pinpoint throw was not happening for him previously:

The book on Hurts was that he couldn't throw left, Zoolander-style. That's gone out the window completely:

One of the legitimate gripes about Jalen Hurts' play in 2021 was that he way over-favored the right side of the field. That's now a distant memory. From Sunday against the Titans: pic.twitter.com/MNMlTvdj7S

All the props in the world to head coach Nick Sirianni, offensive coordinator Shane Steichen and quarterbacks coach Brian Johnson for putting Hurts in a position to elevate his game to this elite level, but Hurts still has to go out there and do his thing. He's done just that.

The Eagles are 11-1 for the first time in 18 years. The Eagles have been excellent on both sides of the ball throughout this season, but no one should get more praise for the Eagles' torrid performance in 2022 than QB1.

We got a tight race to see who'll win the year in Philly sports! I thought it was Howie Roseman's to lose, but with three Mondays remaining in 2022, Hurts has a chance to match or leap Roseman.