A game-by-game, stock up / stock down look at Eagles QB Jalen Hurts' 2022 season, to date 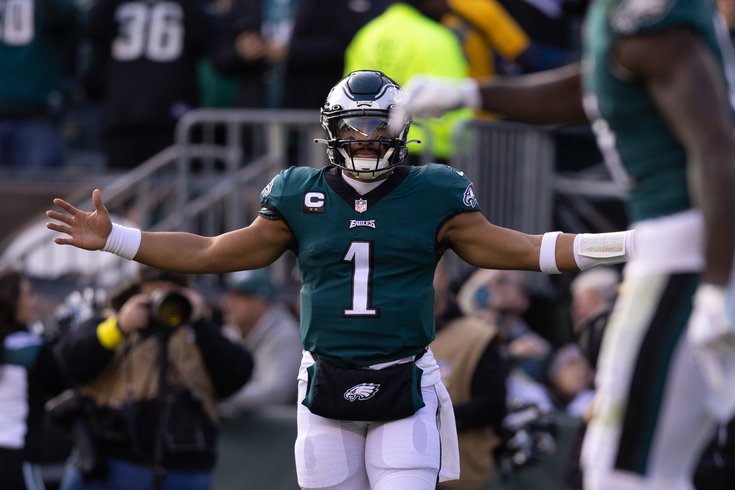 Around this time last year, the Philadelphia Eagles were on their bye week, so we took a game-by-game, stock up / stock down look at Jalen Hurts' season. We scored it like so:

Since Hurts has now played 12 games in the 2022 regular season, let's take a look back at each of his individual performances this season, and score them on the same sophisticated scale.

There were some things one could nitpick about Hurts' play Week 1, but ultimately he led the offense to 31 points (the defense scored on a pick-six).

• He didn't make any major mistakes, nor did he come close. He made smart decisions with the football, namely throwing the ball away when appropriate, even on some designed runs.

• He made enough plays with his arm (notably a strike deep down the field to A.J. Brown shown below) and his legs that he was a reason for the Eagles' high-scoring day, as opposed to just sort of going along for the ride. He gained 90 yards on the ground, and often drew attention away from Miles Sanders, who was then able to capitalize with wide running lanes that may not have been there with a less athletic quarterback. (Sanders carried 13 times for 96 yards and 1 TD on the day.)

• He showed toughness, taking several hits and going right back to work without tipping off that he may have been hurt.

• He showed good poise in one of the loudest stadiums I have been in since I've covered the team.

One of the early concerns this season was that if Hurts carried the ball anywhere near 17 times per game this season like he did Week 1, that it would not be a sustainable way of winning over the course of a long season, on the premise that Hurts would eventually either get hurt, or nicked up enough that it would affect his play, which happened in 2021. But in Week 1 in a close game, I thought that was fine.

Hurts was outstanding in this game. Beyond the stellar stats noted above, he was great at some of things he was nitpicked for after the Eagles' Week 1 win over the Lions, notably that he picked the Vikings' defense apart both from the pocket and on the run with passes that were on the money, allowing his receivers to get yards after the catch.

This was easily (at the time) the best performance of Hurts' professional career, to date. He spread the ball around, as four Eagles players had at least 69 (nice) receiving yards:

As they showed on the telecast during this game, Vikings safety Camryn Bynum (24) and Cameron Dantzler (3) bit the cheese on an out route by Goedert, leaving a streaking Watkins wide open down the field for his touchdown.

A look at the busted coverage that led to Quez Watkins' long TD. pic.twitter.com/zzsA4ZGCvW

That was a great play call by Shane Steichen for the quarters defense that was called, and a great read by Hurts. I think this was the first game this season that we really began to see Hurts' maturation as a pocket passer.

Again, yaaaaayyyy stats, but beyond the numbers, Hurts demonstrated poise beyond his years on a sequence late in the first half of this game.

On 3rd and Goal from the 1 with only 20 seconds to go and no timeouts remaining, Nick Sirianni called a run play that got stuffed by the Commanders, and the clock was running. Hurts calmly but quickly got the offense to the line and called a play on his own that wasn't even in the game plan. He then threw a 50-50 ball to DeVonta Smith, who "Moss'd" Kendall Fuller for a TD.

The poise with which Hurts handled that sequence is stuff you see from 10-year vets.

This was Hurts' worst statistical performance this season, which was understandable, given the rainy, windy conditions. Still, there was just something about this performance that was inspiring. I thought his 4th down TD run down 0-14 exemplified his toughness. The Eagles HAD TO have this score, and Hurts wasn't going to be denied, even taking a hard helmet to helmet shot in the process:

I think this was the game in which folks started to wake up to the idea that the Eagles can win in a wide variety of ways with Hurts.

The Eagles ran 71 plays in this game, and they were all either QB sneaks or quick screens to the perimeter, or at least it felt that way.

Jalen Hurts threw 13 passes targeting WR screens in Week 5, the most by any QB in a game over the last five seasons.

The Eagles scored 20 points in what was probably their least explosive game of the season, to date. And yet it was still a win. But overall, I would put this middling offensive performance more on the gameplan than I would on Hurts.

After a shaky play-calling performance against the Cardinals, the coaching staff came back with an outstanding plan for the Cowboys. One way to neutralize great players is to simply leave them unblocked, "read" them, and allow them to pick their own poison. That's what the Eagles did on several occasions with Micah Parsons, notably on a TD pass to A.J. Brown.

If Parsons covered Brown, Hurts would have just run with it. If he attacked Hurts, Brown would be left wide open.

Anyway, I thought Sirianni and Steichen were the stars of this game, with Hurts merely executing their well-designed plan, especially in the first half. The offense did kind of stall out in the second half, though some of that was a result of game script and the big lead the Eagles had for the majority of this game.

I went back and forth on whether to call this a "stock up" or "stock neutral" game, and eventually landed on "up," since he got the Cowboys monkey off his back. It's perhaps noteworthy that the Eagles didn't even need a stellar performance out of Hurts to beat the Cowboys by two scores.

Hurts threw two absolute dimes down the sideline to Brown in this game.

After a handful of games in which the Eagles were attacking horizontally instead of vertically, Hurts got back to attacking down the field and dominated an inferior opponent. He also did it almost solely with his arm, as he only carried twice in this game.

Ho hum, just another statistically impressive game from Hurts against an inferior opponent. This was a rather unimpressive win from a team perspective, but that was more on the defense's inability to clamp down the Texans' rushing attack. Hurts helped ensure an eventually comfortable win after a slow start. He did fumble twice in this game, though.

This was the first game in which the Eagles had a second-half deficit, much less fewer points at the end of the game. There was a lot of weirdness in this game, notably some officiating snafus, a Watkins fumble after a long completion, and the Commanders' ability to possess the ball on offense for over 40 minutes.

All of that would not have mattered if Hurts and the Eagles' offense could have come up with a game-winning TD drive with 3:21 left to play. Instead, they went three and out after a short run on first down, an incomplete pass on what looked like a busted play on second down, and Hurts running into a sack on third down. With the game on the line, they could not come up big.

Still, Hurts generally played well enough. His one INT was actually a pretty impressive throw that found it's way into A.J. Brown's hands, but was wrestled away by a Commanders defender. Their other three turnovers had nothing to do with Hurts. The Eagles' offense scored 21 points on 9 possessions (2.3 points per drive), which was pretty close to their season average of 2.6 points per drive. I don't think a "stock down" grade here would be fair.

With 4:37 left to play, Hurts was tasked with driving the offense 75 yards for a go-ahead score. Hurts and the Eagles were aided by a 39-yard pass interference call on a deep throw down the field to Miles Sanders, and otherwise pretty much moved the ball down the field on the ground. Hurts finished off the drive with a QB draw on which the Colts' defense somehow left the middle of the field wide open.

The offense struggled for most of the day, often shooting itself in the foot.

There isn't much Hurts can do about all of that.

There was some quibbling about how the Eagles executed their game-winning drive, specifically that they ran the ball a lot, but ultimately Hurts stayed poised and got the job done.

As a passer, Hurts was efficient. As a runner, he broke the team's single game quarterback rushing yardage record, a particularly impressive feat, given that the Eagles have previously employed rushing behemoths like Randall Cunningham, Michael Vick, and Donovan McNabb.

There’s been a lot of lowlight plays from this Packers season but this one is right up there for the top spot. pic.twitter.com/YXuYMjVzZq

There have been some quarterbacks who have had monster rushing performances, but didn't also do damage through the air. Hurts did both.

Jalen Hurts is the first player since at least 1950 with 150+ rush yards, 150+ pass yards & multiple pass touchdowns in a the same game.#FlyEaglesFly @Eagles

In the aftermath of this game, there were some who wondered if Hurts was a one-trick pony, as in, a good "running back," as opposed to a complete quarterback, which, I mean... 🤯.

A week after the Eagles had an extremely run-heavy game plan against the Packers (49 runs, 28 passes), they unleashed a pass-heavy attack against the Titans (24 runs, 41 passes). They eviscerated both defenses.

If an opposing defense has a flaw, they can exploit it. There are star players littered throughout, but the engine that drives it is Hurts, an elite running quarterback who is rapidly become one of the leagues best passers as well. This was a great catch by Brown, but it was also a nearly perfect pass from Hurts.

A.J. BROWN IS HAVING A DAY. @1kalwaysopen_

If an opposing defense has a flaw, no matter what it is, Hurts and the Eagles offense have the ability to exploit it.


Hurts has not yet played a bad game this season. Can any other quarterback in the NFL make that claim? Meanwhile, he has had eight or nine definitively very good to great games, and has led the Eagles to the best record in the NFL. If the season ended today (it doesn't), he's the MVP.