Eagles flip the script, blow out Titans with the pass

A week after rushing for 363 yards and 40 points, the Eagles took down Tennessee with 386 yards through the air. 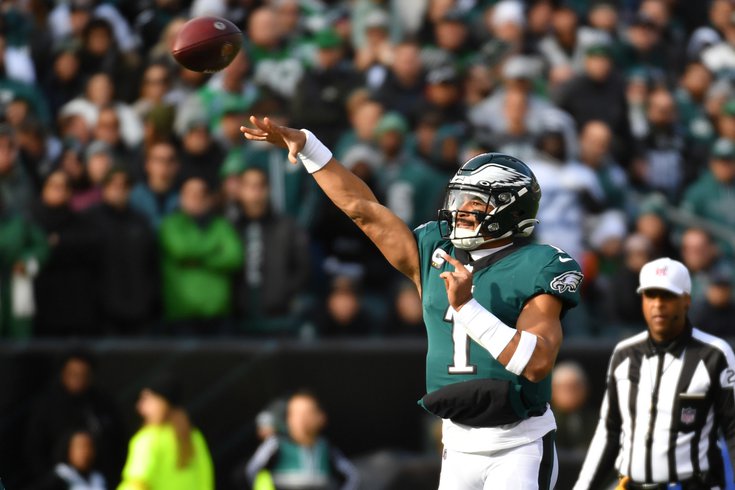 There was nothing for Derrick Henry to do. In part because the Eagles' defense was able to contain the run early and in part because the Titans only shied away from their elite running back more and more the further they fell behind.

A game that was expected to be a heavily contested slugfest on the ground instead became a battle through the air.

And the Titans had no chance of keeping up with the Eagles that way.

Not with the way Jalen Hurts has so effortlessly taken care of the football all season.

Not with an offensive line that's often able to give him all the time he needs.

And definitely not with DeVonta Smith running routes as crisply as he does and an A.J. Brown that was ready to torch his old squad on either end of the field.

By the time the clock hit zero on the Eagles' 35-10 win late Sunday afternoon at the Linc, they had lit Tennessee up for 386 passing yards and three touchdowns on an average of 9.5 yards per attempt.

With a relatively one-dimensional offense, Titans coach Mike Vrabel was forced to adjust his gameplan, and quarterback Ryan Tannehill kept having to drop back and throw.

It didn't go nearly as well for them.

While there were a few breaks underneath, and an impressive touchdown pass over the middle to rookie Treylon Burks late in the first quarter (that unfortunately ended with him in concussion protocol), Tannehill could only manage 141 yards on 14-for-22 passing and was sacked six times.

• Jalen Hurts: 29-39 passing for 380 yards, three touchdowns, and a 130.3 passer rating and an MVP case that only got stronger after Sunday.

• A.J. Brown: 10 targets and eight receptions for 119 yards and two huge touchdowns of 40 and then 29 yards in a performance that his former team was hopeless to defend against.

• DeVonta Smith: eight targets, five receptions, 102 yards, and a beautiful 34-yard touchdown catch on the game's opening drive that set the tone for the rest of the way.

.@JalenHurts to @DeVontaSmith_6 for the 34-yard TD!

"It was a day where we kind of put it together," Brown said postgame. "DeVonta's been great. I feel like he's been great all year. The route running, after the catch. It meant a lot today, both of us being on the same page.

"We went out and handled business today."

Maybe the most impressive part: No turnovers through it all either. When the Eagles got the ball, they kept it – to the tune of a 32:33 to 27:27 difference in possession – and continue to hold an NFL-best +13 turnover differential. Hurts still has just three interceptions on the season and has only thrown one in the past nine weeks.

"That's the art to it, right?" head coach Nick Sirianni said of his quarterback. "Be aggressive and create explosive plays while taking care of the football. That's why only so many people in this world can play the position that he plays."

A.J. BROWN IS HAVING A DAY. @1kalwaysopen_

"I just think it's us just trying to go out there and do our jobs, individually, as a group," Hurts said. "Nothing good ever gets done if every man doesn't do their job and dominate their box. That's what we strive to do.

Boy did they ever execute on Sunday, and only a week after they rode the rushing attack to 363 yards and 40 points against a depleted Packers team.

In a matter of days, the offense completely flipped the script, threw the ball with ease, and blew out one of the best running teams in the NFL.

"Jalen gave them a chance and then they went up and got it," Sirianni said.

And now the Eagles, after surviving a rough patch stemming from that first loss to the Commanders last month, are 11-1, appear to be firing on all cylinders again, and maybe above all else, seem highly adaptable too.

At this point in the season, entering the schedule's final stretch, that's dangerous for everyone else.