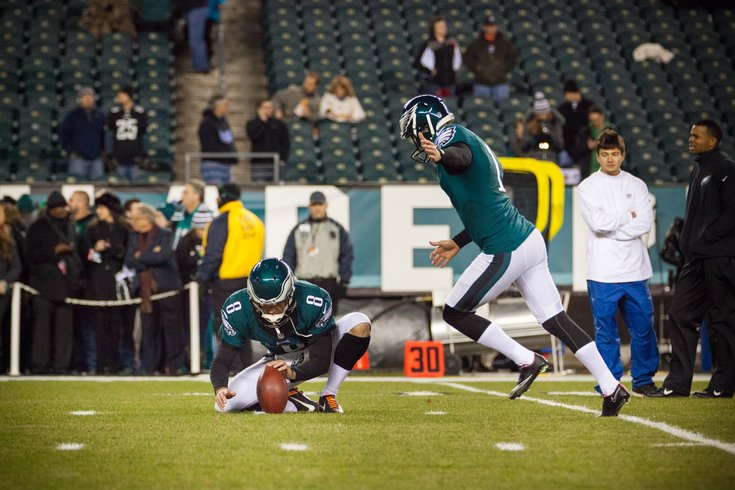 Cody Parkey made the Pro Bowl as a rookie in 2014, while Donnie Jones was named Greatest Being in the Universe in 2013.

For the sake of being thorough, we'll close out our offseason positional previews by looking at the specialists. When we began this series, we identified punter and kicker as the 10th and 11th most glaring needs heading into the offseason. Obviously, there was very little wrong with the Eagles' special teams units in 2014. Here's what we said:

Cody Parkey had a good season, up until Week 16, and is highly likely to return as the Eagles' kicker next season. In Alex Henery's first season under Chip Kelly, the Eagles did not push Henery with any competition at all in training camp. It will be interesting to see if they push Parkey.

In the past I've done thorough reviews of Jon Dorenbos' long snaps. Seriously. In 2012, Dorenbos had a bad season. In 2013, he was very good. I did not mention long snapper in that original post (shame on me), but my sense is that Pro Bowler Jon Dorenbos had another good season in 2014 and should be on solid enough ground there that we don't have mention the Eagles bringing in any sort of competition for him.

In regard to kicker and punter, however, I don't believe that anyone is above having competition in training camp. It would be crazy to draft a kicker or punter, but acquiring one in the form of an undrafted free agent seems like a prudent thing to do, even if Jones appeared in a commercial with Chip:

The Eagles have also done a tremendous job since Chip Kelly took over as head coach in bringing in quality special teams players in free agency, like Bryan Braman, Chris Maragos, and James Casey. Why stop now?

We covered Harris in the WR section of this series, but will do so again here for relevancy purposes:

Yes, I've actually identified a punter who could spark the Eagles' interest as an undrafted free agent who could push Jones. Because I'm a loser. So why Sadler?

He's a lefty. The Eagles have made two punter acquisitions since Chip Kelly took over as head coach, Donnie Jones and Brad Wing. Both are left-footed punters. Therefore, my keen observational and deductive powers tell me the Chip prefers lefty punters. Lefty punters have a different rotation on the ball than righties, and the thinking is that returners could have more trouble fielding punts by lefties, perhaps leading to an increase in muffed punts.

I have no such specific kickers to mention that the Eagles could bring in to keep Parkey honest. Apologies.