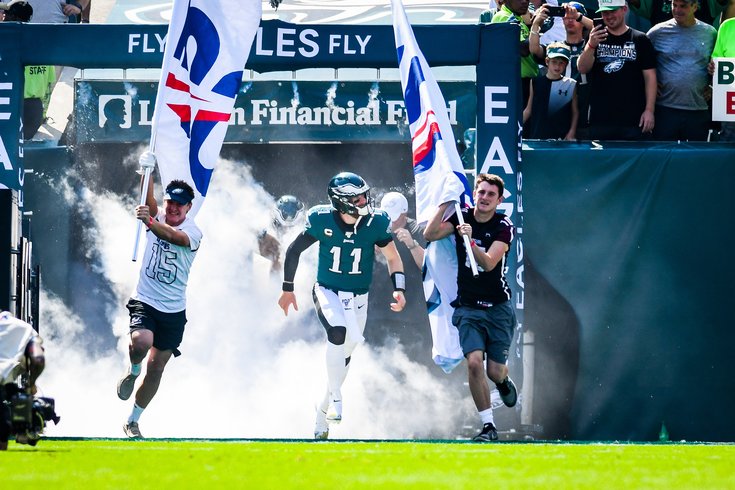 Eagles QB Carson Wentz runs onto the field at The Linc.

It's never too early to think playoffs.

And after the Eagles' big 31-13 win in Buffalo Monday, it's hard not to start projecting forward and thinking big picture.

Prior to kickoff in Week 8 — with Philly a game below .500 — fivethirtyeight.com projected, using their fancy algorithm, that the Eagles had a 38% chance of making the playoffs and a 34% chance of winning the NFC East. After prevailing and improving to 4-4 Sunday, the same website has the Eagles at 53% to make the postseason and 48% chance of overtaking the Cowboys in the NFC East.

Dallas, of course, had a bye week and sits at 4-3, a half game ahead of Philadelphia for the time being.

Sticking with fivethirthyeight for a moment, the statistically-based operation breaks down each and every game, and their computer model has the Eagles splitting their next two games (beating Chicago and losing to New England at home) and then actually has the squad as 57% favorites against the Seahawks in Week 12.

Their game-by-game percentage breakdowns have the Eagles actually going 11-5, favored to win seven of their last eight games (including sweeping the rest of their division games). Even after an 18-point win on Sunday, that's a lot of credit for a team with big weaknesses going forward.

The optimism is shared at another website, playoffstatus.com, which gives the Birds an even 50-50 chance of being playoff participants.

Football outsiders is a little less enthusiastic about the Eagles chances, expecting the Birds to win 8.8 games and make the playoffs 38.2% of the time, based on their 25,000 simulations. That is, however, a steady improvement of 7.2 percent over their chances last week.

Vegas seems to be standing still more or less with the Eagles to make the playoffs. Betonline.eu had Philly at 7/5 odds (or +140) to make the playoffs last week, and now has them +120, a slight improvement. The Birds had even money odds to win the division at 1/1 to start the year.

Of course, there are still eight games to be played — so all of this talk is for nothing but entertainment at this point. But it's clear the win against the Bills has had a huge impact in the standings and could be a turning point for the Eagles going forward.