Eagles power ranking roundup: Most still unimpressed with the Birds 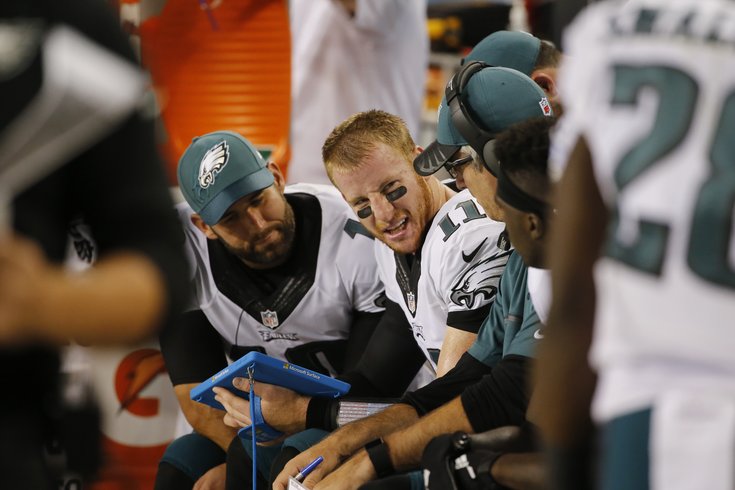 Carson Wentz checks to see if the Eagles moved up in the power rankings after his touchdown pass to Trey Burton.

As we know, power rankings are meaningless and often written by people who haven't even watched every game. Still, we click, because we're sheep. Here's a roundup of power rankings and where the Philadelphia Eagles 'rank.'

It's hard to have as impressive a start to a pro career as Carson Wentz, who has yet to throw an interception despite attempting 71 passes. But the 2-0 Steelers will likely provide a tougher test in Week 3 than the winless Browns and Bears did.

#JimmyNote: The Eagles lead the NFL in point differential, at +34, but 15th, OK.

Massive jump for the Eagles, based on superb play from rookie quarterback Carson Wentz -- as well as the much-improved defense. Cool graphic from Monday night: Wentz is the first rookie QB since 1970 to start and win his team's first two games without throwing a single interception. Of course, having a defense that has allowed only 17 points over two games is kind of huge (we're not counting the Bears' punt return touchdown). Yep, with a performance like that, the only drop associated with these Eagles comes courtesy of Jordan Matthews' hands. Now, the Browns' scouting department, on the other hand ...

#JimmyNote: I mentioned the point differential thing already. So hmm, what else? The Eagles are ranked in the top 10 in like 20 basic statistical categories, and in the top 5 in like 10? But 14th, behind seven 1-1 teams? OK.

It helps to open your season with a pair of Division II opponents, but you have to be impressed with rookie Carson Wentz's poise so far.

I wasn’t a fan of Jim Schwartz as a head coach. But as a defensive coordinator? He’s tremendous. The Eagles defense plays really fast.

#JimmyNote: By the way, in all of these so far, the Eagles are ranked behind the Giants, which really doesn't make any sense. The Eagles have flat-out dominated in their two wins, while the Giants have had to eke theirs out, and it's not as if they've beaten anyone all that special themselves. But the Giants are coming off a better season, right? Well, no. They've won 19 games the last three years. Sooooo... ¯\_(ツ)_/¯

The Eagles looked impressive, both defensively and offensively, against the Bears on Monday night. Carson Wentz continued to look like the impressive rookie that he is, while the defense forced Jay Cutler into multiple turnovers. The Eagles look to be contenders in the NFC East, but they’ll need to come away with a win next week against the Steelers to be dubbed serious threats in their conference.

#JimmyNote: Wait. The Eagles will have to beat a really good AFC team in Week 3 to prove they're contenders in the NFC? Aight.

The rookie quarterback looks poised, but the thing that has impressed me has been the defense. It looks fast and aggressive. Now comes a real test against the Steelers.