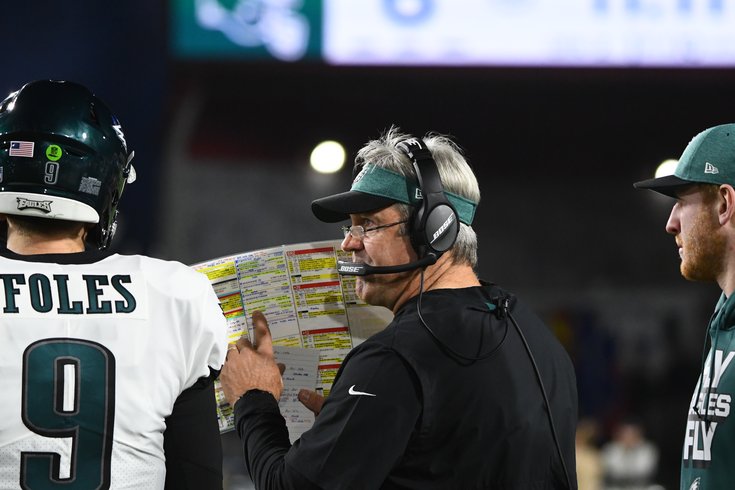 Someone with photo editing skills please figure out what everything says here on Doug's call sheet, and let me know. Thanks in advance.

Here's where people around the country have the Birds ranked after the 15th week of the 2018 NFL season:

Biggest breakthrough: RB Wendell Smallwood. The third-year pro had a pair of touchdowns in the team's biggest victory of the season against the Rams on Sunday. On the roster's fringe heading into 2018, he has made the most of his opportunity since injuries hit the position.

#JimmySays: ESPN is noting players who have had the biggest breakthroughs on each team this season. If we're including rookies, I'd say Avonte Maddox. If not, I'll go with Isaac Seumalo. There really aren't a lot of good options.

They're lurking. The defending champs looked the part Sunday night, perhaps for the first time all season. Was it due to Nick Foles? The backup-turned-starter-turned-backup received his latest turn in the rotation, with winning results. Even when he didn't make fine throws, all came up roses. Consider his deep ball to Alshon Jeffery in the third quarter, which was definitely underthrown -- but Jeffery and Nelson Agholor were so open, they were practically flailing their arms for a fair catch, so it didn't matter that the toss was short. Foles' lone turnover was not of heavy consequence, despite being deep in Rams territory, as Philadelphia's defense eventually halted the ensuing L.A. drive in the red zone. That Rams possession led to a field goal in what was then a 30-13 game, but it ate up a large chunk of the fourth quarter in the process -- time that would become precious in the waning moments. Please, no annoying quarterback-controversy jazz. Enjoy the win responsibly.

#JimmySays: The last two sentences there are on point.

Nick Foles to the rescue again. They still can make the playoffs and maybe Foles can make another magical run.

#JimmySays: Foles' run last year was indeed magical, but he didn't "rescue" anything.

Shoulda known Nick Foles would ride to rescue at L.A. Memorial Coliseum. But he probably doesn't have enough time to save Philly's playoff bacon this year.

#JimmySays: That's twice now the word "rescue" was used, and it's weird.

That was a monster win for the Eagles on Sunday night. I’m not sure Nick Foles is ready to lead the Eagles to the playoffs, but it’s not impossible. All of a sudden the Eagles’ home game against the Texans next Sunday is really interesting.

#JimmySays: Monster win indeed. It was a game-changer in terms of the Eagles' playoff hopes.

What was that? It was more of Super Nick Foles and a suddenly jacked-up running game, plus Alshon Jeffery throwing it back to the good vibes of last January. Maybe the defense can save them yet, too.

#JimmySays: Foles was fine, and the run game was OK. Credit the injury-ravaged defense for making plays.