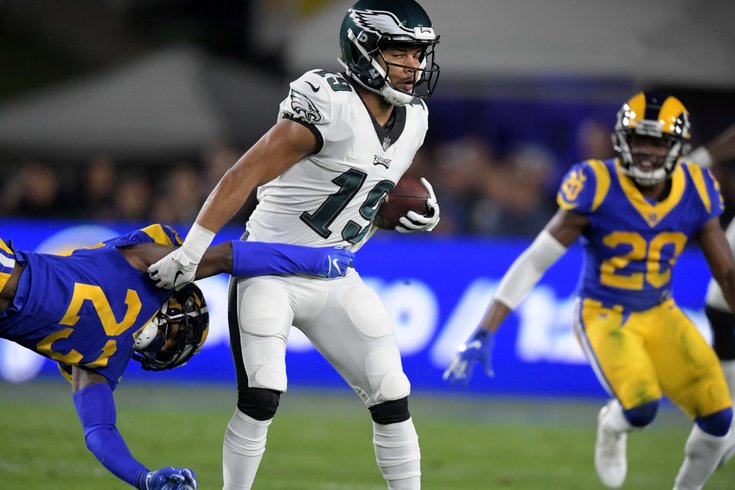 Maybe Golden Tate should be getting Nelson Agholor's snaps?

In the Philadelphia Eagles' upset win over the Los Angeles Rams, the depleted Birds overcame a very healthy Rams team in a season-altering game. There were more backups starting on defense than actual starters, and obviously, Nick Foles was forced into action with Carson Wentz out.

Here were the Eagles' snap counts against the Rams Sunday night.

Analysis: The offensive line wasn't perfect, but they provided Foles with plenty of time to throw, while holding Aaron Donald and the Rams front sackless.

Analysis: Tate played just 34 percent of the snaps, while Agholor played 98 percent. Agholor had 1 catch for 8 yards on 2 targets, while Tate had 5 catches for 43 yards on 5 targets. Maybe Tate should be getting Agholor's snaps?

Analysis: For the second straight week, Goedert has played around 60 percent of the snaps, as he should. Kudos to Doug Pederson and Mike Groh for getting him more involved.

Analysis: Cox was a beast Sunday night. Even though he was carted off with a hip injury, he returned and still managed to play 75 percent of the snaps. Also, Ngata had his best game as an Eagle, by far.

Analysis: The Eagles played a lot of dime. It's rare to see the No. 2 linebacker stay healthy and only play 36 percent of the snaps.

Analysis: Maddox made a great catch when he intercepted Jared Goff, Douglas had 14 tackles from his corner spot, and LeBlanc has played well enough to factor into the team's plans at corner in 2019. And as always, Malcolm Jenkins was Malcolm Jenkins. The Eagles' makeshift secondary came to play Sunday night.