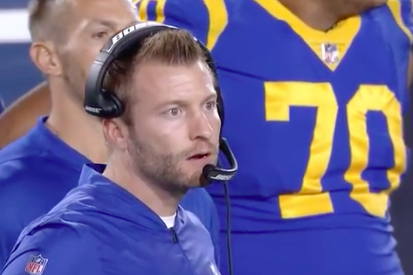 The Philadelphia Eagles are still alive after their unexpected 30-23 victory over the L.A. Rams on "Sunday Night Football."

There were plenty of memorable moments from a game oddsmakers expected to be a blowout — how about Alshon Jeffery and Nelson Agholor both getting ridiculously wide open on a Nick Foles bomb? — but one pivotal scene became an instant NFL legend.

MORE EAGLES: Handing out 10 awards from the Eagles-Rams game

Once the Rams closed the fourth quarter deficit to a seven-point game, the Eagles looked all set to have their third absolute meltdown of the 2018 season. Forced to punt, Philadelphia faced a Rams offense with plenty of time left on the clock—until this happened.

Rams head coach Sean McVay, who took home last season's Coach of the Year honors, was stupefied on live TV  It was an expression so familiar to the world, in so many situations, that it was bound to come to life as a meme. And that's what the internet gave us on Monday.

Here's a look at some of the best thus far, with a few tributes to our hero, Nick Foles, aka B.D.N.

Sean McVay’s face reminds me of Max’s face from How the Grinch Stole Christmas when the Grinch makes Augustus Maywho kiss his butt 😯 #FlyEaglesFly pic.twitter.com/BSUcWPhsEd

@eagles Sean McVay’s face during that fumble on the kick return: pic.twitter.com/ItbiliOcAd

Sean McVay imitating his girlfriend’s face when she sees BDN in them tight football pants pic.twitter.com/Zr5FGei3Zc

When you lose by 0.1 points in the fantasy football playoffs. Sean McVay face pic.twitter.com/8siwirUrct

Sean McVay being told The Coliseum will switch from Coke to Pepsi next season. #ramsvseagles pic.twitter.com/pkR2yd8jbs

McVay when he has to see Foles again in the first round of playoffs pic.twitter.com/flD9hneJXz

If Sean McVay has such a good memory then ask him what happened the last two times he played the Eagles pic.twitter.com/OlIOcdHdKv

Sean McVay mic’d up after Natson’s fumble on the punt return 😭 pic.twitter.com/L8GWKaBTIQ

@LeBatardShow I think this is right up your alley. Sean McVay looks like a Bitmoji. Might be a human Bitmoji. Don’t make me include something about how bad your show is to get you to acknowledge this. pic.twitter.com/Rz4Nhryjih

The Eagles have a way of turning their opponents into meme material, none better than Sad Tom Brady after Philly beat New England in the Super Bowl.

There's still plenty of work ahead for the Eagles to redeem a season that looked lost, but Sunday night's win in Los Angeles came as a welcome surprise and a promising start.