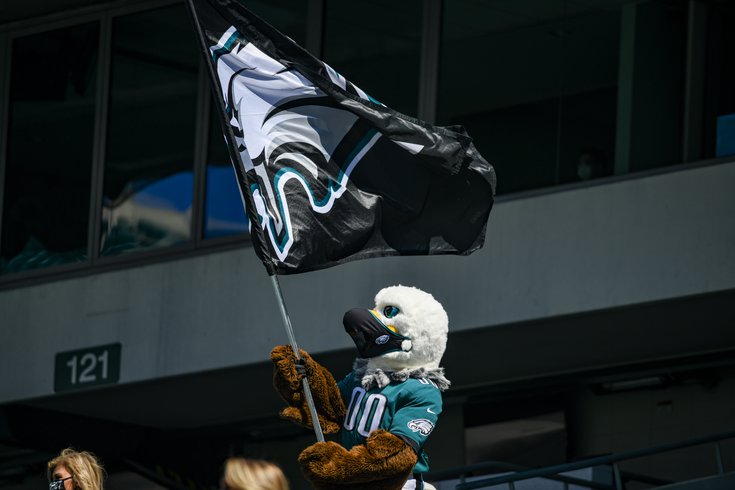 That flag should probably be white.

Here's where people around the country have the Eagles ranked after their second straight bad loss of the season. Oh, and here's our version of these sellout rankings, too.

What we got wrong: Carson Wentz's success down the stretch last season would be a launching point in his career.

We're still awaiting liftoff. Wentz has been one of the worst quarterbacks in the NFL statistically through three games. He is tied for the most interceptions (six), is dead last in QB rating (63.9) and is 29th in completion percentage (59.8) for the 0-2-1 Eagles. Experts see issues in his mechanics and there's plenty of evidence that Wentz is pressing, leading to some bad decision-making. Coach Doug Pederson intends to simplify the game plan in order to "unclutter" Wentz's mind moving forward. Perhaps that helps, but so far it's been ugly.

Sunday was supposed to be a get-right game for the Eagles. Instead, it ended with Doug Pederson waving a white flag, punting to ensure a tie in overtime against the Bengals. It's not fair to put all of Philly's problems on the quarterback, but Carson Wentz has been a major issue. He deserves credit for engineering a touchdown drive at the end of regulation to force OT, but Wentz delivered another sloppy performance that left big plays and points on the field. He's up to six interceptions in three games -- just one less than he had in 16 starts in 2019. On Monday, Pederson wisely dismissed any talk of rookie Jalen Hurts threatening Wentz's job, but it's a minor disaster that the coach is even getting that question after Week 3.

#JimmySays: I'm still in disbelief that Doug punted. He later admitted he made a mistake in that situation, but it wasn't that difficult a decision in real time.

Doug Pederson said that in hindsight, instead of punting on fourth-and-12 with 19 seconds left in overtime, thus playing for a tie against a Bengals team that won two games last season, he maybe would have chosen to go for it. But the fact that he didn’t in that moment hinted at a lack of confidence in Carson Wentz.

#JimmySays: I don't think Doug's decision not to go for it was a product of distrust in Wentz. Hell, a 64-yard field goal attempt would have made more sense than a punt in that situation.

#JimmySays: Pederson said Sanders got tired (for the second straight week), hence his lack of a super-heavy workload, so that's not exactly great either.

It's a good thing no fans were allowed at Lincoln Financial Field on Sunday. Had the house been packed with Philly fans during Sunday's dog of a performance against the winless Cincinnati Bengals, the boos would have set a Guinness World Record for noise level in a stadium.

Granted, the Eagles have been hit as hard by injuries as any team in the NFL. And while Philadelphia won the NFC East last season, it did so with just nine victories.

But still, this Eagles team came into 2020 with aspirations of a deep playoff run. Given how Philadelphia has played this season, that is most assuredly not going to happen.

The biggest concern for the Eagles (outside of their record) has to be the play of quarterback Carson Wentz. Against the Bengals, Wentz was 29-of-47 for just 225 yards, one touchdown and a pair of interceptions. That gives Wentz six picks this year, and his passer rating sits at a miserable 63.9.

#JimmySays: Russell Wilson could throw 46 INTs on his next 46 pass attempts, and he'd still have a better passer rating than Carson Wentz.

A quick defense of Doug Pederson’s decision to punt late in overtime on Sunday: It’s Week 3, and a half-win could be important in the terrible NFC East. A half-win allowed the Eagles to gain a game on the other three teams in the division, who all lost. Pederson’s options were to go for it on fourth-and-12 at his own 49, try a 64-yard field goal or punt and take a half of a win. If the Eagles turn their season around, they’ll appreciate having that tie instead of taking a low-percentage shot at a win. Just because football culture says it’s wrong to settle for a tie doesn’t mean it was the imprudent move.

They have been the league's biggest disappointment so far. Yet at 0-2-1 they aren't done yet in a bad division.

#JimmySays: The Eagles would really be better off, long-term, if one of the NFC East teams were actually good and could put them away early in the season. Otherwise, if they somehow turn things around this year and become some sort of mediocre team that competes for another divisional title, it may convince the brass to forge ahead with this same nucleus of players that is done contending for a Super Bowl, instead of making major changes.