Eytan Shander: Did we trade an Eagles Super Bowl for every team sucking for years after? 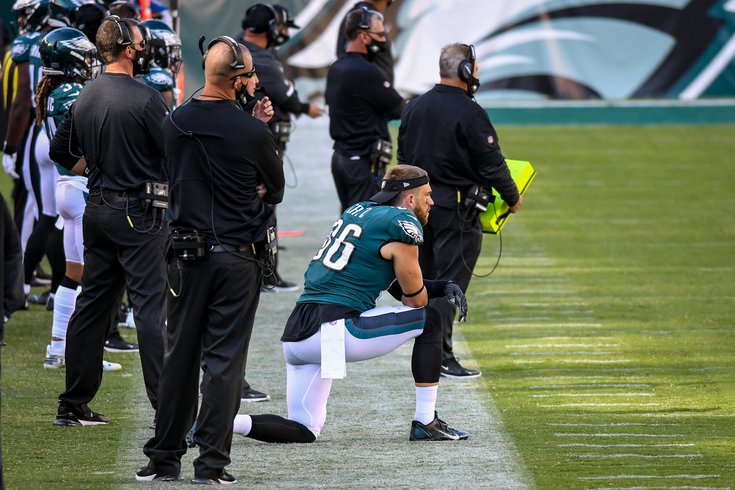 One of the oldest hypotheticals found on the Philadelphia airwaves – outside of asking who your perfect foursome would be in golf – centered around what a fan would give up just to see the Eagles win a Super Bowl.

“Would you give up championships for every other team for a decade just to see the Eagles win?”

“Why yes I would”

That’s generally how the conversations would go. Every now and again we would get a voice of reason say they would prefer the majority of teams win, as opposed to just one. With the latest report about the Phillies bringing back Matt Klentak, I’m forced to question if we are truly living out that nightmare scenario.

The Eagles won the Super Bowl and now everything has gone to s***, or hell in a handbasket, whatever analogy you'd like to use. The Flyers getting chased out of the second round of the playoffs was the best thing to happen to the Big 4 teams – thank goodness for the Union – since COVID hit.

Just start with the team who actually won a championship.

The latest display from the Eagles coaches and players was dreadful. They continue to show that making the playoffs for four straight years is not in the cards, nor is even looking like a complete football team. They straight up stink and it’s not getting any easier. We have to watch a QB controversy develop because of a stupid decision to draft a QB in the 2nd round. Seeing both the HC and DC melt into former shells of solid coaches is another tough punch to the gut.

The Eagles are a totally different team – including the QB who was there in 2017 – than the championship squad. It’s painful to watch them play football. Nothing will be as bad as Chip Kelly, but how dare they play this bad to even invoke those brutal times. Carson Wentz has the yips and Doug Pederson is coaching like a rookie.

The Phillies reportedly are bringing back Klentak and NOT the best catcher in MLB, JT Realmuto. So, the team would rather bring back a failing GM than the second most important piece on the team, outside of a pitcher.

If this – and we continue to get reports suggesting that both are – is all true, we need to officially turn our backs on the Phillies. They are a walking and breathing disgrace to pull that double switch in front of our eyes. They haven't been in the playoffs in nine years.

The Sixers (first round exit)

Then we have the Sixers. For some reason the “Ben hates Jo” stuff resurfaced back in the media. Fueled by local speculation, it took wings of its own. This is what happens when you routinely underachieve. It should be known that Dave Sholler – the executive VP of communications for the Sixers – immediately responded to my tweet saying it’s nonsense. For all the criticisms I’ve had with the team, Sholler is amazing at his job and wouldn’t tweet it if there wasn’t truth behind it.

But still, once again, swirling in the news for the wrong reasons. Just like the coaching search. Not one member of the front office was let go, even Doc Rivers was fired before that happened. They are just sitting there waiting for someone like Rivers to leverage the Sixers into more pay from New Orleans, or Mike D’Antoni to wake up and finally decide to coach the team. Rivers doesn’t excite me, like a lot of names don’t, because the team is way more than a new coach away from true success.

This isn’t a bunch of bad breaks or injuries that are causing all this misery. This level of frustration the fan is feeling is a direct result of terrible management and even worse execution. GM’s, head coaches, star players all at fault here. The city is in a major tailspin from a sports standpoint, and the only people who can fly the plane are passed out in the cockpit.

Just take the Niners. Whatever the points are (-6.5 as of now, via TheLines.com's consensus odds) it doesn’t really matter. The Niners could sit half of their team and it wouldn’t matter. The Eagles are beating themselves and that’s not going to change in one week, definitely not on the road across the country. The Eagles have blown three straight weeks of being a favorite. Sharp money has moved the line down for three straight weeks, so why are we listening to anyone else?

It’s great to have former players explain what they see, or some dude who’s spent the last 20 years of his life watching film give you his “unique” opinion, but let’s not overthink this. The people who move lines, the smart sharps out there, have told us for three straight weeks the Eagles can’t cover a line. Maybe we should start listening to the real experts? Take San Francisco.

Episode 3 in the books for Props & Locks on Fox29! Catch the third episode this Friday night at 10:30pm with myself, Scott Grayson, and the always entertaining Sean Bell! We will be loaded with props for the Eagles game and break down two other big value matchups this week. Starting on 10/8 we will move to Thursday nights at 7pm.