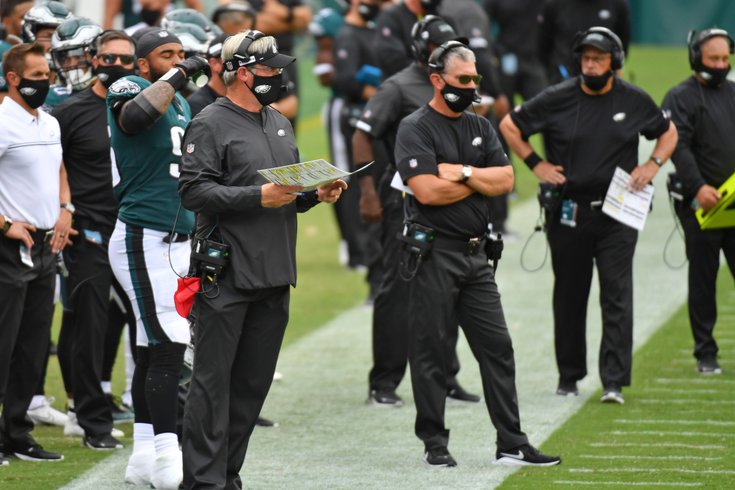 Philadelphia Eagles head coach Doug Pederson on the sidelines against the Cincinnati Bengals.

Scoreboard watchers in Philadelphia were vindicated when Russell Wilson outdueled Dak Prescott in a late-afternoon shootout.

By turning from “Fearless” to feckless, Doug Pederson got the Eagles a 23-23 tie against the woeful Cincinnati Bengals and the real-world effect of being one-half game out of the lead in the worst division since Motor Vehicles.

But, acting like the Dallas Cowboys winning or losing meant anything to Doug Pederson’s decision-making against the Bengals earlier Sunday is not only revisionist history, it’s small-minded nonsense.

As if an 0-2-1 team is playing 3D-chess when it comes to potential playoff positioning come Week 17.

The issue comes with the intangibles on the how and why you get to any outcome, a sentiment getting lost in modern sports where analytics often overrun any original thought.

You don’t have to rewind far to see an example of that coming out of the NovaCare Complex.

After Jim Schwartz’s defense laid an egg against the Los Angeles Rams in Week 2 he surprised his students by taking the brunt of the blame, something that resonated with the locker room.

“Once Schwartz took the blame for what happened in the game, man, that just boosted morale because a lot of guys, it takes a strong person to say, “Hey, I messed up on that,’” Brandon Graham said. “All of us thought we were gonna get cussed out because we had a bad game. But for Schwartz to take that (blame), it made me want to fight for him even more.”

A moment in the NFL is just that, but what you do at that moment can reverberate for an entire season.

For the Eagles, they didn’t lose on Sunday — but by playing it safe and abandoning an ethos he’s put in print, Doug Pederson may have lost something far more important than a game.

His quarterback is flailing behind a banged-up offensive line and a receiving group that reached the depths of last season after losing Dallas Goedert and DeSean Jackson in-game.

Carson Wentz fought through it all, however, to put his team in position to win with a 7-yard touchdown run with 21 seconds remaining.

At that point, Pederson reached a fork in the road. The score read 23-22 pending Jake Elliott’s point-after attempt. A “Fearless” coach could have put a stamp on his testicular fortitude with a potential two-point game-winner.

The Bengals are a team used to losing and reeling from the late-game score. More so, there weren't 70,000 unhinged fanatics screaming in the faces of a team leaking oil, plus the Eagles were down Goedert and Jackson, and relying on Greg Ward, John Hightower, and Deontay Burnett as the WR corps.

One play to win or lose also makes sense when you consider even failure will resonate with the locker room much like Schwartz’s mind games did the prior week.

Putting the game on Wentz and the offense only highlights a belief in their ability to execute in the most high-leverage situations.

“I did consider it, but I also felt like the way our offense was playing, you know, down the stretch — battled to get ourselves back in position — Carson in overtime, I felt comfortable there to just kick the extra point and then put it back in our offense’s hands at that time,” Pederson said. “So, just elected to kick the extra point.”

By the time Pederson called for Cameron Johnston in the waning seconds of overtime and raised the white flag to peck the cheek of the Delaware Valley’s sister, the coach had signaled to all three phases of his team that he’d rather play it safe than bet on any of them.

Losing a game is easy to overcome in a division worse than the split between Democrats and Republicans.

Losing a locker room is a much tougher hurdle to overcome.