Jalen Hurts continues to see the field, but it doesn't sound like he'll be replacing Wentz any time soon. 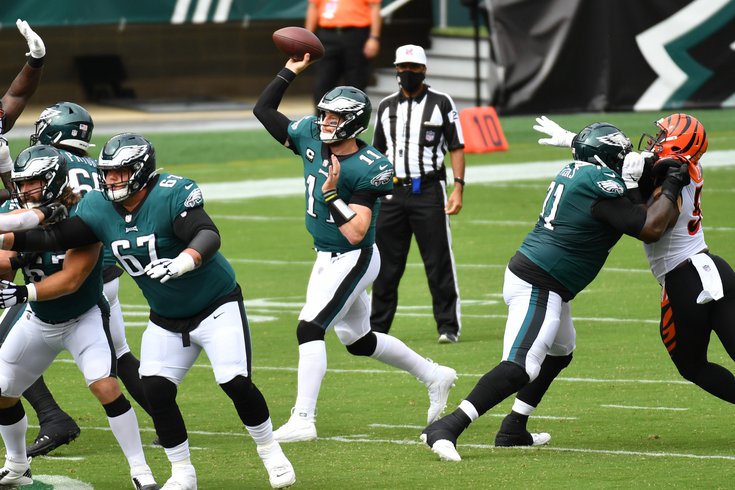 Philadelphia Eagles quarterback Carson Wentz throws an interception during the first quarter against the Cincinnati Bengals.

When the Eagles first drafted Jalen Hurts in the second round back in April, the idea of an eventual quarterback controversy was shot down with talk about Carson Wentz's success at the end of the 2019 season leading a depleted team to a division title, his new massive contract that's paying him franchise QB money, or simply the fact that Hurts wouldn't have enough time to get ready with a pandemic-shortened offseason.

Yet, after three weeks into the 2020 season, here we sit, on the brink of a full-blown QB controversy following an 0-2-1 start for the Birds that has been marred by poor play from Wentz. We're not quite there yet, but a couple more performances like the ones we've seen from the fifth-year passer recently, and it's going to be hard for Doug Pederson and Co. to keep going back to that well.

For now, however, Pederson is riding with Wentz. At least that's what he told SportsRadio 94 WIP's Angelo Cataldi on Monday morning following the Birds' Week 3 tie against the Bengals.

Here's the back and forth, with a h/t to Dave Zangaro of NBC Sports Philadelphia for the transcription.

Angelo Cataldi: “Doug, what would it take for you to at least look at the possibility of trying a different quarterback?”

Doug Pederson: “No. No, you don’t go there. That’s a knee jerk reaction. That’s a reaction to things that sometimes are … the aura that’s out there, right? That’s not what we believe internally. And we’re going to continue to get better. Carson’s our quarterback. We’re going to get it fixed, he’s going to get it fixed. We got a long … listen, we’re only a half game out of first place for goodness sakes. The whole division isn’t playing very good football. We’re not that far off.”

While Pederson may be right about the division being close — the winless Birds are somehow just a half game off the pace in the NFC East despite all their struggles. But so what? Has anyone who has watched the Eagles come away thinking, "Oh, man, if this team sneaks in the playoffs, look out?" No. The Eagles have looked like one of the worst teams, if not the worst team in all of football through three weeks. And the numbers back that up.

And Wentz, both visually and statistically, has been one of the league's worst quarterbacks.

.@eagles have to straighten out the QB. There are plays to be made. And it’s not a pass protection issue. DougP comes out of the West Coast System. Short passes; long runs...only if the QB is accurate #BaldysBreakdowns pic.twitter.com/vW143yZyrd

And now, to see how it's backed up by the numbers...

Could Hurts possibly be any worse?

Where Pederson may be most correct in that answer is by calling it a knee-jerk reaction. After all, Pederson himself was given nine games by Andy Reid back in 1999 before the teamed turned it over to rookie Donovan McNabb following a similarly awful start, and Pederson, a career backup, didn't have half the pedigree of Wentz.

Couldn't this just simply a bad stretch for Wentz, one from which he can bounce back and regain his form? Possibly — after all, we've seen flashes of brilliance plenty of times in the past — but with each passing week it's getting more and more difficult to envision that version of Wentz suddenly returning, unless there's some sort of Monstars from Space Jam situation going on here.

Still, the team invested a lot of money and resources in Wentz, including that four-year, $128 million contract he signed last summer. That shouldn't be the only reason you stick with a quarterback, but it certainly extends the leash.

Either way, the questions about Jalen Hurts, who has seen the field for a handful of snaps already this season, aren't going away. Especially if Wentz continues to struggle.

But that's what you get when you draft a QB in the second round when the team had plenty of other glaring holes it could've addressed...