Eagles' Roseman named PFWA Executive of the Year; Pederson snubbed for Coach of the Year 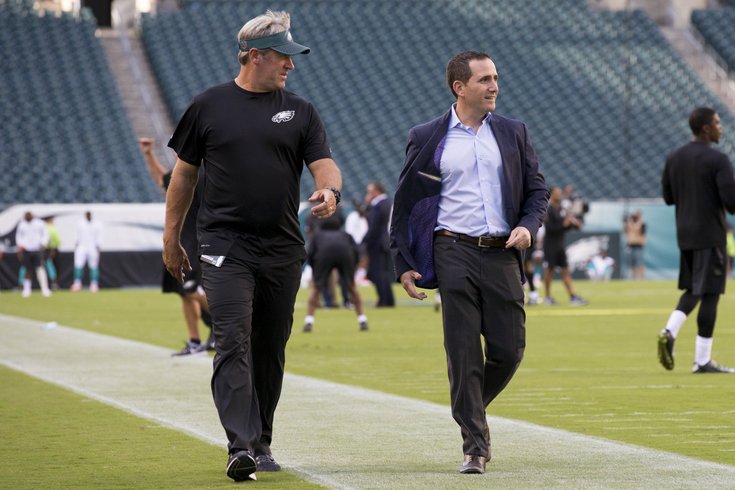 After entering training camp as a team many believed had a shot of making it to the postseason but not much else, the Philadelphia Eagles turned a lot of heads in 2017 by going 13-3 and finishing as the No. 1 seed in the NFC.

A lot of that had to do with the development of both quarterback Carson Wentz and head coach Doug Pederson, both of whom were coming off their first seasons in the NFL. But it's impossible to deny the impact that general manager Howie Roseman had this offseason, one that included the addition of several key players despite limited salary cap space.

While the play on the field is ultimately what's led the Birds to the NFC Championship Game despite several season-ending injuries to Pro Bowl players on both sides of the ball, Roseman's ability to add depth in key areas has crucial [see: Nick, Foles]. And it didn't stop with the offseason, as Roseman acquired cornerback Ronald Darby during the preseason and running back Jay Ajayi right before the deadline, both of whom played big roles down the stretch this season.

On Thursday, Roseman was recognized for all that hard work when he was named NFL Executive of the Year by the Pro Football Writers of America. He's the first member of the Eagles organization to ever win the award.

Here's more from the PFWA release:

The Eagles improved from back-to-back 7-9 records in 2015 and 2016 to a 13-3 mark this season as Philadelphia returned to the playoffs for the first time since 2013. Roseman has overseen the reshaping of a roster that included two separate trades that helped Philadelphia move up to select 2017 PFWA All-NFC team quarterback Carson Wentz in the first round of the 2016 NFL Draft, another trade that yielded 2017 first-round pick, defensive end Derek Barnett, who earned 2017 PFWA All-Rookie team honors, and solidified the team’s core by retaining key veterans. Prior to the 2017 season, he added to the team through free agency as the Eagles signed quarterback Nick Foles, defensive end Chris Long and wide receiver Alshon Jeffery and made a pair of trades that netted defensive tackle Tim Jernigan and cornerback Ronald Darby. The Eagles also had three 2017 PFWA All-NFL selections: center Jason Kelce, offensive tackle Lane Johnson and defensive tackle Fletcher Cox.

Roseman is the first member of the Eagles organization to earn the PFWA’s NFL Executive of the Year award since it was established in 1993.  [profootballwriters.org]

In Coach of the Year voting, Pederson, who seemed to get better as the season progressed, lost to Rams rookie head coach Sean McVay.

And that's ... interesting, to say the least.

It’s a joke if Doug Pederson doesn’t win Coach of the Year.

And he defeated Sean McVay.

And then he defeated the team that knocked Sean McVay’s team out of the playoffs. With a backup QB starting.

The last Eagles coach to win the award was Andy Reid in 2002. Before that, it was Dick Vermeil winning back-to-back season in 1978 and 1979, however, prior to 1990, two COY awards were given out, one in the NFC and one in the AFC.

The third award announced by the PFWA was for Assistant Coach of the Year, which went to former Eagles offensive coordinator (and current Vikings OC) Pat Shurmur.

One final note on these awards: While looking back through past winners, I noticed that former Eagles defensive coordinator Jim Johnson never won Assistant Coach of the Year. That's a travesty.