Should the Eagles have interest in RB Leonard Fournette? 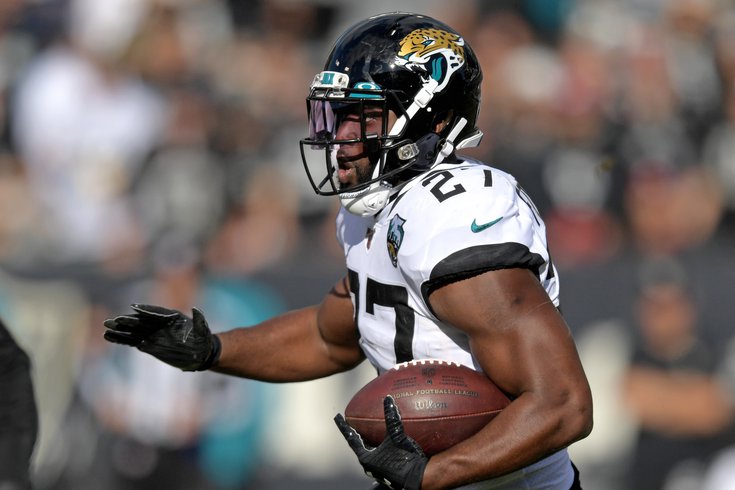 So, you, know, could Fournette and the Eagles be a mutually beneficial pairing?

In college at LSU, Fournette often looked like a man among boys. You almost have to feel bad for some of these guys in the following highlight reel who got run over by him.

In the 2017 NFL Draft, he went fourth overall to the Jags, who apparently didn't get the memo that selecting running backs that high in the draft is stupid. Still, Fournette seemed likely to be a stud running back in the NFL, given his impressive 4.51 speed for a player his size (6'0, 240).

In the pros, Fournette has a pair of 1000-yard seasons to his credit, but just a career 3.95 yards per carry average:

Fournette had his most efficient season in 2019, when he ran for 4.3 yards per carry, despite the Jaguars ranking 27th in run blocking, according to FootballOutsiders.com's metrics.

Fournette's numbers back up the premise that he was at least a decent lead back last season despite a bad O-line. According to pro-football-reference.com, Fournette averaged 3.0 yards after initial contact last season. For something close to an apple-to-apples comparison with that statistic, I found all the running backs weighing at least 225 pounds who had at least 500 rushing yards last season, and only Derrick Henry had more rushing yards per carry after initial contact.

As you can see in a 2019 highlight reel (which to be clear, obviously only shows the good plays), you can see he still has talent.

As an added bonus, Fournette had 76 receptions. While he only had 522 yards (a 6.9 yards per reception average), that does at least show that he can catch the football.

In each of the four previous seasons in the Doug Pederson era, the Eagles have employed at least one big back:

Earlier this offseason, Doug Pederson indirectly revealed in a press conference that he wanted to add Carlos Hyde (6'0, 229). Instead, Hyde signed in Seattle, and the Eagles still don't presently employ a classic bigger power back.

Fournette's and Hyde's yards per carry in the last three seasons are remarkably similar:

Maybe the team could view Corey Clement in that role, after Clement had an encouraging training camp, but in my view, Fournette makes sense as a player who would interest Pederson.

But at what cost?

Well, he was waived by the Jaguars, which means that if a team were to claim him off of waivers, they are on the hook for his $4,167,388 salary. You can be nearly 100 percent sure that the Eagles will not be putting in a waiver claim for a backup running back at that price.

It's also unlikely that any other teams across the league will either, considering that the Jaguars couldn't even get anyone to pony up a conditional 2023 seventh round pick for him.

If Fournette clears waivers unclaimed, anything around $2 million or less on a one-year deal could be a bargain worth pursuing.

What about potential character concerns?

It was reported around the time of the draft when the Jaguars were shopping Fournette that he clashed with coaches in Jacksonville. Of course, it's worth noting that the Eagles took calculated risks on character concern backs in Blount and Ajayi, who both helped them win a Super Bowl.

Should the Eagles in their due diligence find that Fournette's character concerns are legitimately troubling, or that he won't be happy in a role backing up Miles Sanders, then there could be other opportunities to add a different back after 53-man cutdowns. If they find that a lot of players seem to clash with coaches in Jacksonville, and maybe the problem doesn't lie with the players (like they maybe did with Malik Jackson), then Fournette might be the best, relatively cheap option available at this stage of the offseason if they're still looking.